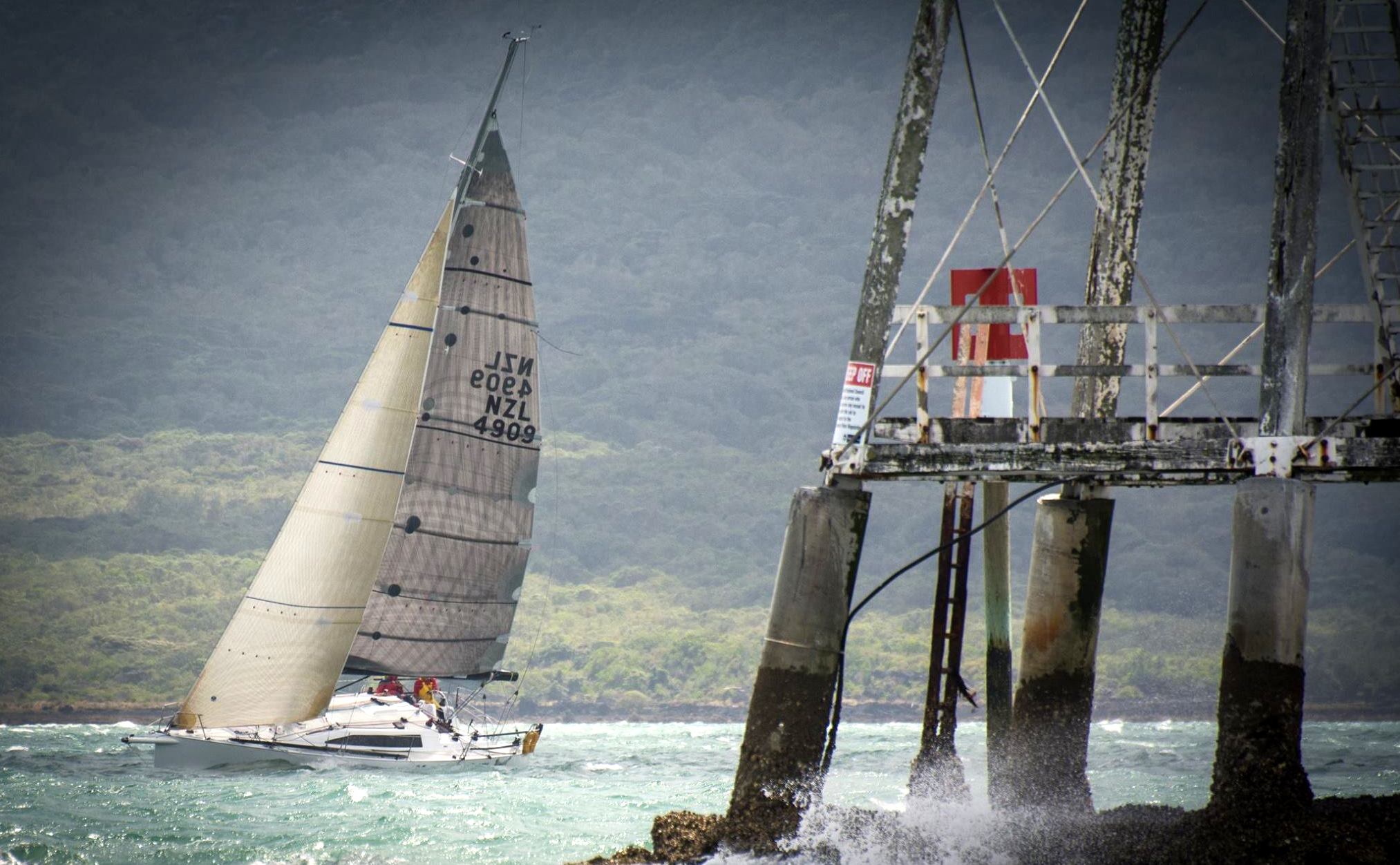 White Island Race report. Marshall Law. Snatching defeat from the jaws of victory!!
After a hectic few months fitting in major mods to the Marshall and putting her all back together, we rocked up to the White Island start line, the first time the boat had been sailing in about 4 months! The forecast sounded ideal. Reach to Channel, downhill slide to White Island, Westerly change for a light reach back up the coast. Forecasts huh?
Phil was keen to do the start, so he tried for a Starboard tack, boat end start. Nice idea but probably 15 seconds late to make the Port starting fleet tack over. We got away OK, but as we beat out towards Channel the first problem showed itself. Somehow, A short bolt through the traveler had been overlooked in my “to do” list and immediately pulled through the deck, with the traveler following. A quick lashing to a pad eye prevented any real damage, but it meant that we couldn’t twist off as much as we usually do. We did OK upwind to Channel (Reach, what reach?) pacing Notorious, with Pacific Sundance, Sunfast 3600, and Nirvana romping away upwind.
As the breeze increased, we changed to the #3, but did it really badly, stalling the boat, going sideways and letting Notorious get away somewhat.
Around Channel and we found some nice steep waves. We shook out the reef and shot off downwind while deciding inside or outside the Mercs. In the meantime, Phil had fun and set the speed record for the race of 18.7 knots under #3.. Inside looked good for the masthead kite, so up it went. While we could still see, the kite ride was great, but as the night closed in, we only had the digital compass to steer by, with no lights or any stars or moon to transit on. Steering all night was hard work, but we made awesome gains as we ticked off the fleet one by one averaging 10-11 knots but bursting to 15 knots in the waves. Navigating through all the Hole in the wall bricks was fun, as well as trying to keep the boat upright and on one gybe.. The new keel was making itself felt though with better acceleration and faster average speeds. Thank you Mr. Dibley!
Photo thanks to Sue Ellen Hurling and RAYC. Title inspiration thanks to Yo Gotti – ed.
Read on.

it’s what you’d do too