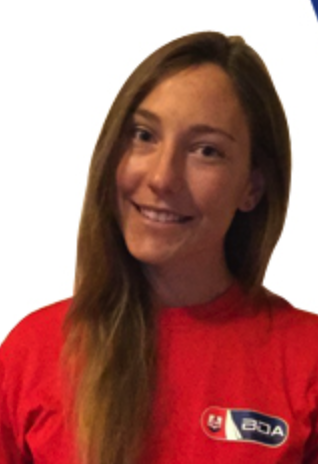 Sailor Chick of the Week
We’re not exactly sure how 21 year-old Emily Nagel got the call to cross the stream with Jimmy, Shannon, and an Oracle-tinted crew, but the young match racer and BDA Youth AC team member is clearly on the way to making a name for herself thanks to a Red Bull publicity stunt that just ended last week.
Nagel helped crew Bronco –  Michael Domingez’s Newport-based DNA F4 foiling catamaran – on a passage from New York to Bermuda with Spithill, Falcone and several other crew (along with a Red Bull media contingent) on what turned out to be a fairly underwhelming attempt to make some noise.  Their 66-hour trip – that’s about three times the outright record –  was only noteworthy for the survival conditions, but Emily does become the first woman to make the crossing on foils, and we’re always fans of women – especially young, passionate sailing chicks – getting a ‘world first’ under their belts.
After watching the surprisingly dull teaser video for the trip, we’re mostly struck by just how uninspiring and monotonous ‘James’ Spithill has become now that age, success, and media overtraining have clearly ended any chance he had of leading the next generation of inspired racer.  Maybe the full-feature movie (dropping in a couple of weeks, we’ve heard) will show another side, but we doubt it.  It’s too bad Red Bull can’t hang their sailing hats on someone young, brash, and extreme….like Jimmy Spithill, circa 2005.
Meet Emily in a Red Bull video over here, and if you’re allergic to Youtube, there’s a full profile of Nagel from the Bermuda News.
If the DNA F4 looks familiar to you and you’d like to understand how it differs from the Gunboat G4 we all know and love (to hate?), take a half hour and watch this full video tour of the Holland Composites/DNA Performance Sailing facility in the Netherlands performed by Mr. Clean this past Thursday.  You’ll get a full history of the shop as well as a close look at the world’s fastest foiling A-Cats as well as a close inspection of the most advanced electro-hydraulic foil controls ever built.

shot with his own gun

“Daddy, How Come Ours Doesn’t Have A Couch Like This?