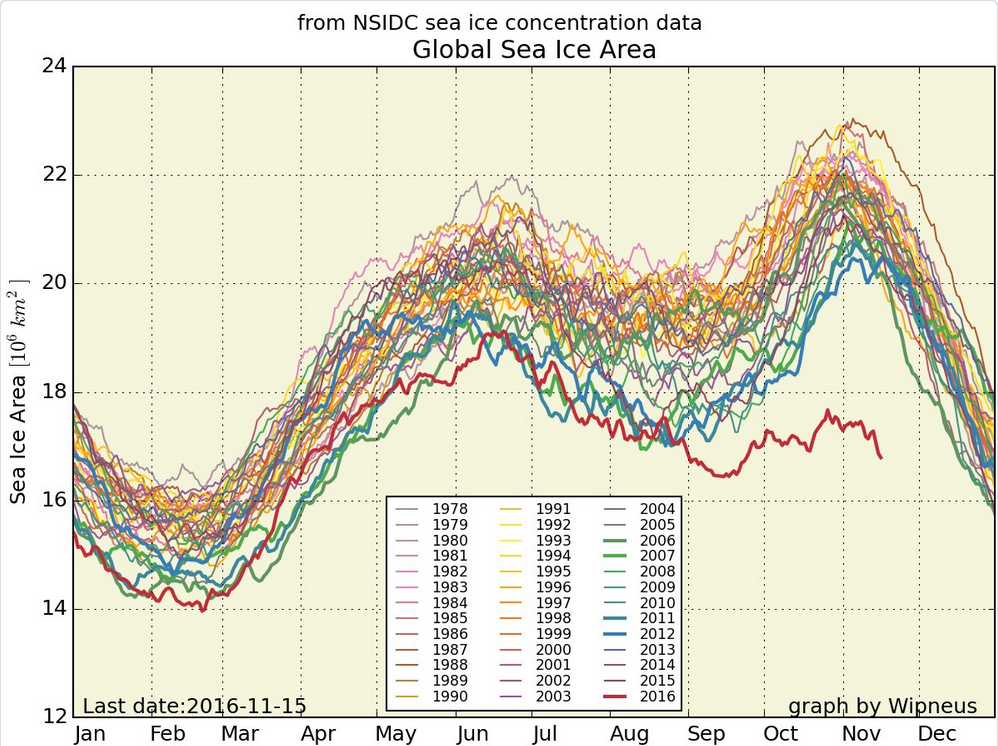 As President-Elect Trump taps a leading climate-change denier and paid-for Exxon policy wonk to run the Environmental Protection Agency, startling new evidence from the poles threatens to finally put an end to decades of ridiculous arguments against man-made climate change.
For the first time since accurate recording began (1971), Arctic and Antarctic sea ice are both running at record-low levels.  At the same time, low-latitude temperatures are at record highs.  From the WashPost:

Mark Serreze, who heads the National Snow and Ice Data Center in Boulder, Colo., agrees that something odd is going on. Not only are air temperatures unusually warm, but water temperatures are as well.  “There are some areas in the Arctic Ocean that are as much as 25 degrees Fahrenheit above average now,” Serreze said. “It’s pretty crazy.”
What’s happening, he explains, is sort of a “double whammy.” On the one hand, there is a “very warm underlying ocean” due to the lack of sea ice forming above it. But, at the same time, kinks in the jet stream have allowed warm air to flow northward and frigid Arctic air to descend over Siberia.
“The sea ice is at a record low right now, for this time of year, that’s one thing,” Serreze said. “And why it’s so low — again, there’s so much heat in the upper ocean in these ice-free areas, the ice just can’t form right now. The ocean’s just got to get rid of this heat somehow, and it’s having a hard time doing so.”

At the same time, weather forecasting is about to get much more accurate thanks to the just-launched GOES-R geostationary weather satellite, at least if you believe the folks at NASA and NOAA.  Capturing the entire US weather situation in the time previous satellites could barely shoot one small region, GOES-R should improve extreme weather forecasting as well as long-range trend analysis for Earth’s atmosphere and even ‘space weather’.
Of course if you believe the fake news, 97% of Americans don’t care about global warming, so maybe none of this matters.  At least until all those nonbelievers are watching their shit float away downstream…

back of the bus