…before you wreck yourself

Over the years I have written extensively about life harnesses and life jackets and whether or not they should be worn and I have definitely taken some heat for my opinions and perhaps deservedly so. I am not a big fan of either and believe that each individual should decide how they feel about wearing a harness or lifejacket.

Having said that I was kind of shocked when I heard that the famous Chines sailor Guo Chuan, who was recently lost at sea on a solo Pacific crossing, was indeed wearing a harness when he fell overboard. Now that his shore team have managed to salvage the  boat they discovered his tether and found that it had snapped.

So take a look at these two photos and let me know what you think. It sure looks like it broke but I am mystified. The harness tether looks pretty flimsy to me but even so, I am a sailmaker and I work with webbing and the stuff is strong as heck. 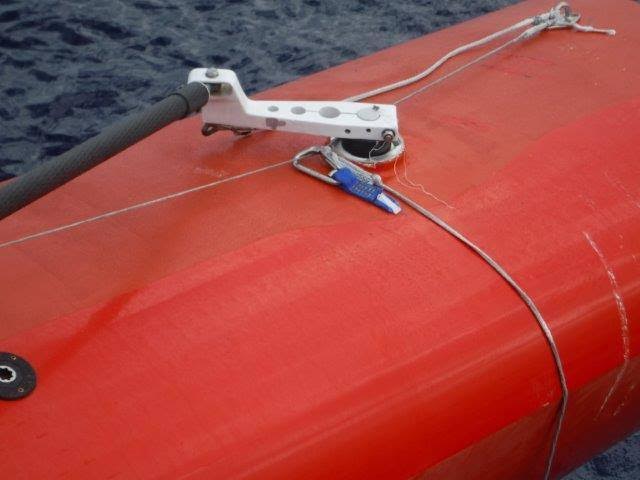 The only conclusion I can come up with is that his harness had probably seen plenty of sunshine and it’s the UV that can take something as strong as webbing and reduce it to having almost no strength without it looking visibly different.

So here is a head’s up to all. Just as you check your smoke detector batteries annually may I suggest that each Memorial day or whatever day you like you make a point of changing the tether on your harness. Had Guo Chuan been wearing a new harness he may very well have survived.

That is of course if you think that he could have hauled himself back on board a boat sailing at 15-20 knots. I have my doubts and so I am guessing he would be dead either way. Either RIP Guo Chuan. For the time that you were with us you were an inspiration.