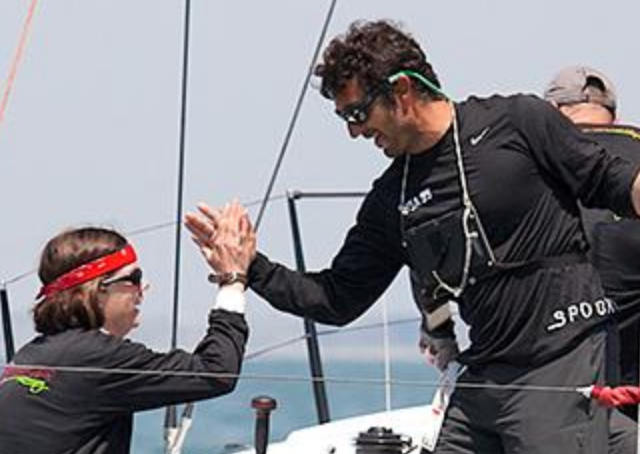 NOTE: Keep an eye out for our latest SA Podcast with Bora and Petey Crawford about more national championship titles, TP52s, foiling cats, and Olympic craziness; it’s dropping tomorrow. Subscribe on iTunes here.
In January, when Quantum Racing toes up to the starting line at Quantum Key West Race Week, the crew will include Bora Gulari who is joining the team for the 2017 52 Super Series. With owner-driver Doug Devos steering the boat in Key West, Gulari will serve as strategist and begin his training with the team. Gulari is scheduled to take the helm in March with the Super Series Miami Royal Cup and will fill a very similar role as Ed Baird’s over past few years with Devos’ involvement.
Gulari is known for his 2016 Olympic Sailing on the Nacra 17 and the Moth, where he has claimed two World Championships. He is also a top Melges 20 and 24 sailor. Gulari’s experience on the TP52 goes back to 2009 and includes Steve Benjamin’s American TP52 Spookie and the helmsman position for Phil and Sharon O’Niel’s Natalie J, a Michigan-based 52. Gulari was also set to sail in the 35th America’s Cup aboard the Italian boat Luna Rossa before they withdrew from the competition. Adding to these credentials, Gulari was named 2009 Rolex Yachtsman of the Year.
Of his new role Gulari says, “The opportunity to be part of the best grand prix team around is awesome. I’m honored and excited to get on the boat. I can’t wait to get on with it!” When asked about his small boat sailing, Gulari says that will continue as well. “I have some unfinished work in the Olympic catamaran, and the Moth sailing keeps the skills sharp.”