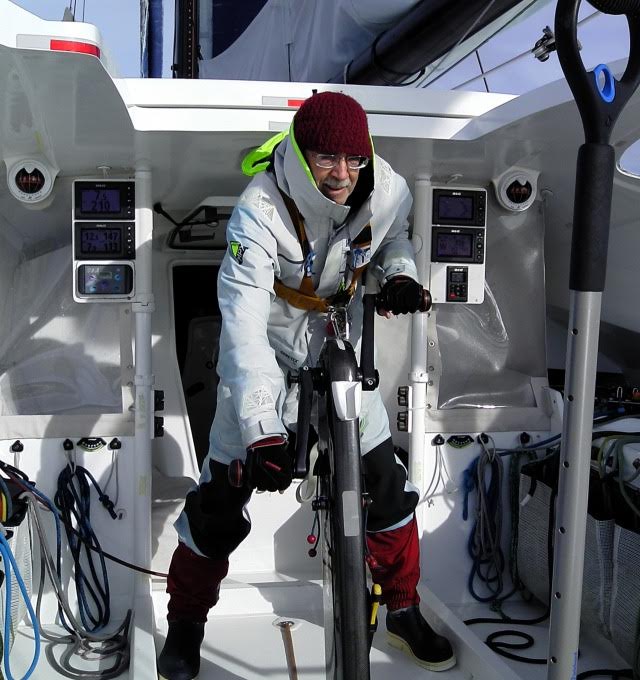 I am going to start this with an anecdote, a really good one. It’s an old story but I have never found the right place for it so I am just going to chuck it out there before I segue into what I really wanted to write about. In the 1992-1993 Vendée Globe there was a French sailor by the name of Bertrand de Brock.

He was sailing through some rough seas in the Southern Ocean with his boat slamming into a short chop when he suddenly hit a square wave. The boat crashed down into a trough and as it hit the bottom Bertrand’s jaw snapped shut and he bit off his tongue. Yup he bit an inch of his tongue clean off.  Now that’s a tough predicament to be in when you are close to an emergency room but when you are alone on a boat thousands of miles from land you are, to put it mildly, a bit screwed.

Races such as the Vendée Globe have an on-shore doctor that can talk a skipper through just about anything, but I bet this was a first. The doctor thought it through and then made his decision. De Brock was going to have to sew his tongue  piece back on which is what he did. Guided by looking in a mirror he took a needle and thread and sewed his tongue back together. The self operation was a success but de Brock was forced to retire later in the race with hull damage. He entered the Vendée four years later and was forced to retire but on his third attempt he completed the race and this coming Sunday he lines up with 28 other sailors to take on his fourth Vendée Globe.

Now for my story. Lining up alongside Bertrand will be my friend Richie Wilson. He is a neighbor of mine here in Marblehead and this will be his second Vendée Globe. He completed a successful lap of the planet eight years ago and is back with a much more powerful IMOCA 60 for this race. Rich has no aspirations of winning but his motivation is much more important than a podium finish. You see for the last two decades Rich has been tackling extraordinary sailing events all with the aim of using his exploits not only as a way to inspire but also to educate.

His Sites Alive website has a full-on curriculum for school teachers to download and use in their classrooms to give their students an immediate and broad look at the world around them. Rich and his boat and his experiences will be the central theme but so will subjects like climate, the environment, nutrition and many more topics that can be linked to a 24,000 mile circumnavigation. In the Vendée eight years ago Rich estimated that 250,000 students followed his voyage around the world. For this race they have the potential to reach two or three million students. Quite extraordinary and what an incredible tool for teachers and best of all it’s free.

At 66 Richie Wilson in the oldest competitor in this race and also suffers from asthma. In a previous life he was a math major at Harvard and later got a master’s degree in business administration from Harvard Business School and a graduate degree in interdisciplinary science from M.I.T. But the ocean and teaching has always been his passion. He was after all a high school teacher in Boston in the mid-1970s but left that life for one of adventure. Make no mistake the Vendée Globe is an extraordinary adventure. The competitors will start on Sunday, take a left out of the Bay of Biscay and sail south to circumnavigate Antarctica before returning to France three months later for the faster boats, and four months later for the slower ones.

Since I started with an anecdote let me finish with one. Rich told me that for the last race he had an alarm clock that registered at 120-decibels. To give you an idea of how loud that is the noise of a chain saw is around 110-decibels. Apparently he managed to sleep through his alarm on a number of occasions. So while you and I and many others gather the snacks and beers and park off in front of the TV to watch the ballgame this Sunday, spare a thought for Richie, Bertrand and the other sailors setting off on an epic adventure and let’s hope that they all return safely, tongues intact.

The 13:02 (France time) start will be live streamed – you can find the link on the Sites Alive website – .  You may also enjoy this article about Rich by Christopher Clarey in the New York Times . – Brian Hancock.