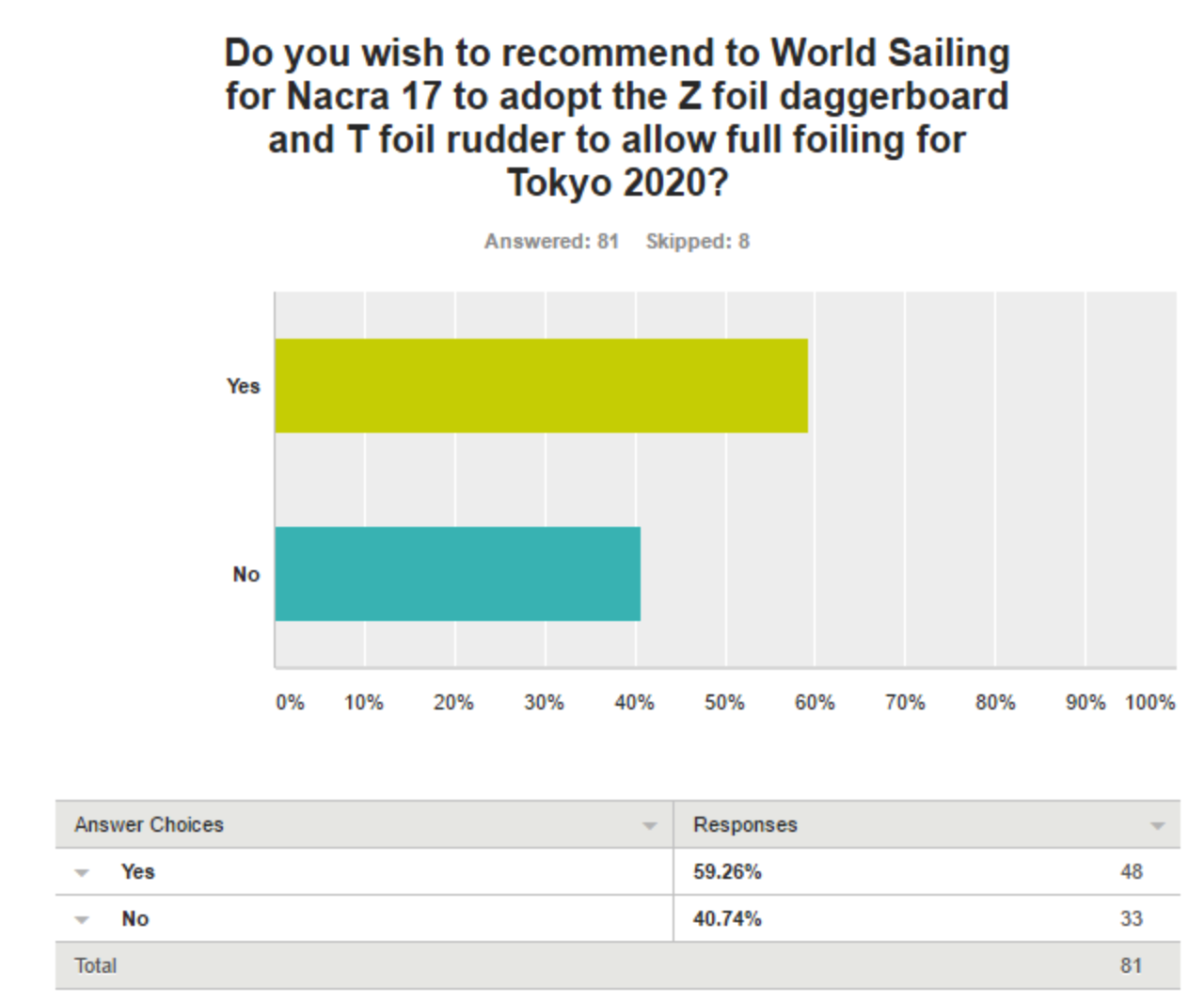 Unlike the messy US Election, the choice for the first-ever Olympic foiler was a much less nasty affair.  Plenty of questions remain about the equipment and event choices for Tokyo 2020, but the odds-on favorite for the first flying boat at the Olympics is now the Nacra 17 in its new 4-point foiling configuration.   A majority of the 89 votes cast during an EGM held over the weekend called for the full ‘evolution’ of a boat that had more than its share of problems in its first quad, and while no one thinks this will be an easy transition, Anarchists who’ve tested out the new design have walked away with big, big smiles on their faces.  We’ll have more on this in a couple of weeks in Barcelona, but for now, here’s the press release from the Class:

On the 19th of October the Nacra 17 class members assembled for an electronic Extraordinary General Meeting (EGM). Three topics debated were
a) an update to the class constitution
b) advertising
c) whether or not class members recommend full foiling for 2020 or not
A presentation covering the proposed changes to equipment, pricing, and procedure was shown to 50 members in attendance over the course of 2 hours. Details of how the boats would be made stronger and more consistent were included. Also shown was three pricing options for a mk 2 Nacra 17 was presented which can be downloaded here.

The three options for equipment going forward are:
a) retrofit a mk1 boat to go full foiling for 7,900 euros
b) Buying a new platform for 14,500 euros, retaining the ability to sell the mk1 platform for a next cost of about 7500 euros
c) Buying a new boat for 24,250 euros, an increase of about 2000 euros from the mk1 price
Following the presentation was a discussion with questions and answers from class members and leadership. At the close the meeting, voting was opened to class members. 89 members voted from the total membership of 132, above the 40% threshold required to form a quorum. All of the motions passed, with the advertising and constitution motions receiving 87% support or higher. the major question of whether to recommend to World Sailing whether Nacra 17 should go fully foiling for the 2020 Olympic or not was a closer vote, but ultimately passed 48 votes to 33, for a 59% support level.
As such, the Nacra 17 class has sent a letter to the head of the Equipment Committee of World Sailing with the class recommendation.  Class president, Marcus Spillane, will convey this position at the World Sailing Conference next month in Barcelona. Equipment of the updated configuration will become available following confirmation from World Sailing Conference of their position on the matter. Team wishing to get onto the waiting list for mk2 equipment should be in contact with the Nacra Sailing head office.