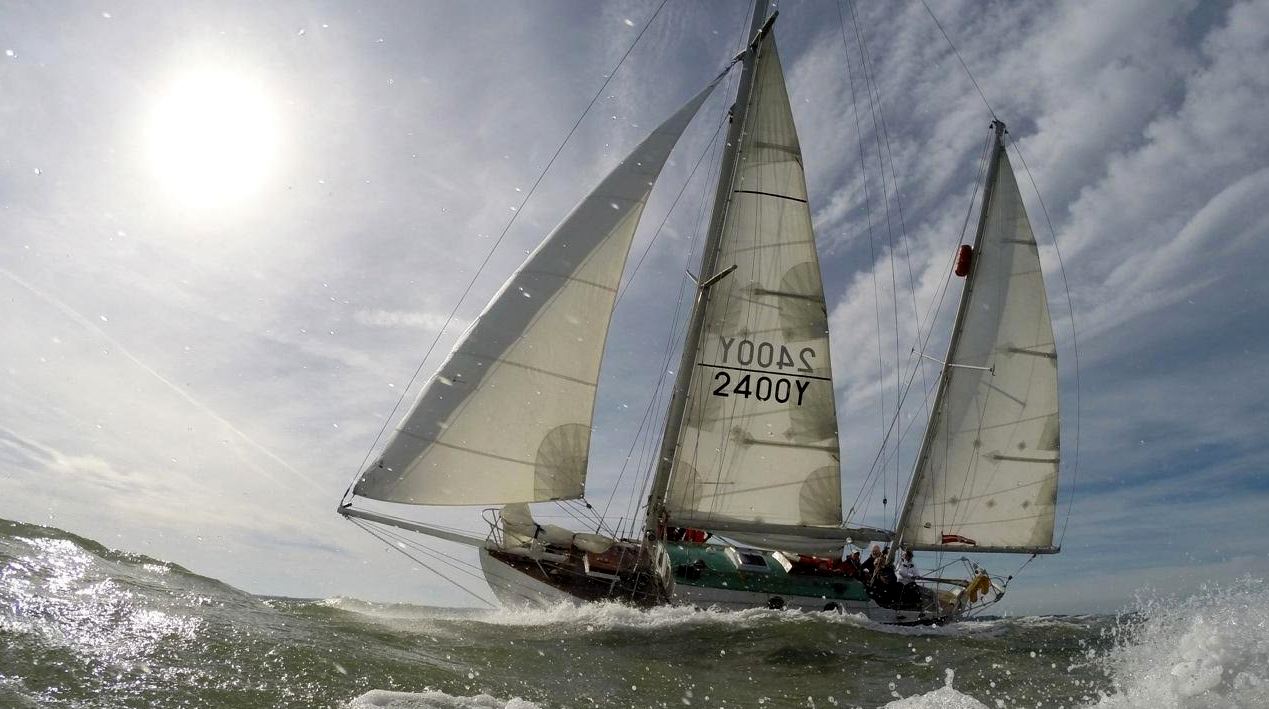 When I was a kid one of the books I read that really captured my imagination was A World of My Own by Robin Knox-Johnston. It was his account of his solo, non-stop voyage around the world aboard his tiny ketch Suhaili. It was true adventure and as a kid all I wanted in my life at that time was adventure. Robin would become the first person in history to sail solo, non-stop around the planet and while I had full admiration for his accomplishment, I was kind of in awe of his boat. Suhaili was 32-foot William Atkins designed double-ender. Photos of the interior showed a tiny cramped cabin with a single burner stove.

Not sure where Robin slept because the boat was loaded with over a thousand tins of food. Yup this was before freeze dried food. Each tin had had the labels removed and was carefully varnished to prevent rust. Suhaili was built out of wood in a carvel planked fashion which in those days was a common way of building boats, but by today’s modern boatbuilding standards Suhaili was not much short of a leaky tub. I was in awe that Robin took the boat the entire way around the planet; Cape Horn included.

Fast forward 30 years. I was minding my own business raising a family when an email dropped into my inbox. The name on the email was Sir Robin Knox Johnston and the subject was “writer needed.”  I was a writer and had been writing about my own sailing experiences as well as about some sailing events, but this particular email was out of the blue. Robin by this time was Sir Robin, knighted for his contribution to sailing and in recognition of his epic circumnavigation. He was also the owner of the Around Alone race, formerly the BOC Challenge. At that time it was the only single-handed around-the-world-race that had stopovers. 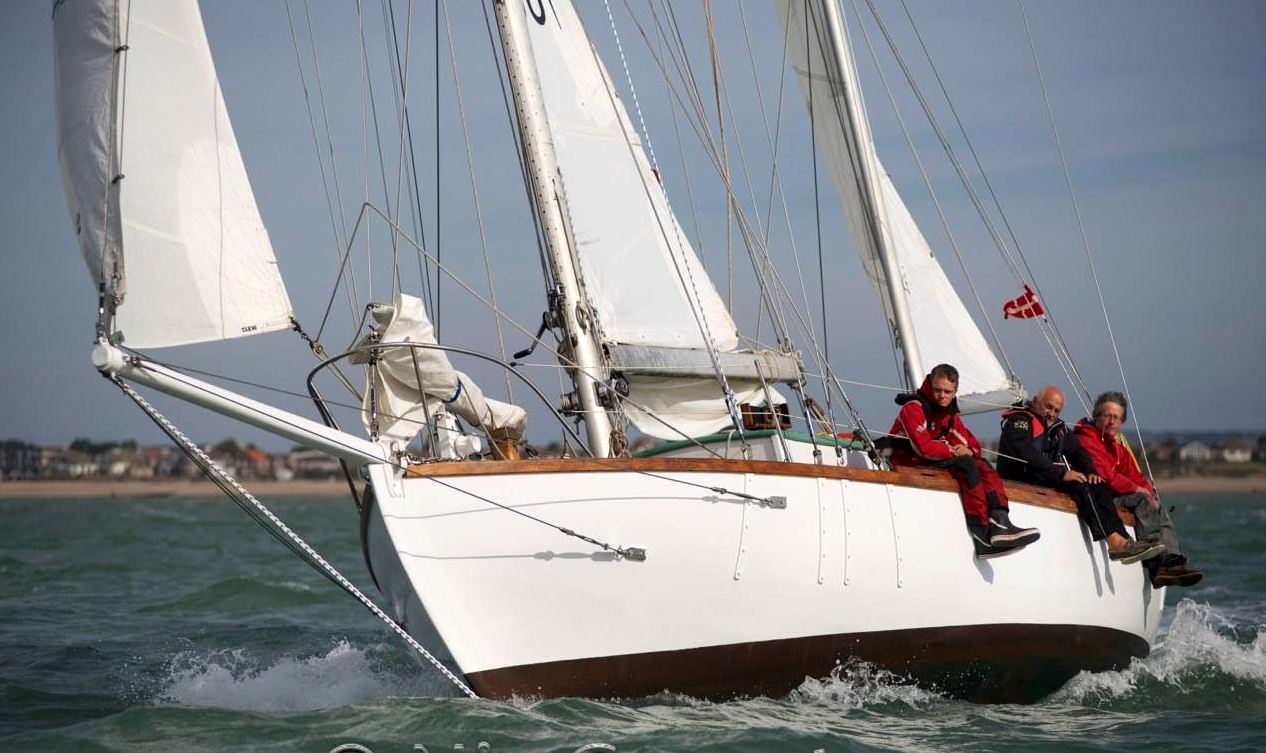 I skimmed his email and smiled to note that he took the time to introduce himself – as if no one had ever heard of him. “We are looking for someone who can tell the story of the race through the eyes of the competitors,” he wrote. “You have been around the world and you can write so I thought we should talk.” I made contact with Robin and the rest is in the rearview mirror, as they say. I was hired to tell the story of the 2002/03 Around Alone Race and it was one of the most fun projects I have been ever been involved in.
For the previous – I am not sure how many years – Suhaili had been housed in a maritime museum on display for all to see, but Robin told me that he had “rescued” the boat from the museum and floated it again. “A boat like that needs to be wet,” he told me. And so Suhaili had been splashed and was in a small marina on the south coast of England. The first leg of the Around Alone went from New York city to Brixham, a seaside town on the south coast of England. I did not put two and two together, but I was soon in for one of the most fun days of my life.
The first Around Alone boat was getting close to the finish line and I was lined up to go out on the media boat to capture the moment. I had my gear ready when Robin stopped by my desk. “Come with me and bring your foulies,” he said, and so I followed him out of our media center to his car. We jumped in and as we took off Robin leaned over. “We are going for a sail.”  He was the boss but I had a job to do and was thinking of protesting when we pulled up alongside a small, wooden double-ender tied up alongside the dock. Suhaili: In the flesh, or rather, in the wood. We were going out for a sail on a boat that I had only read about and dreamed about.
It was just Robin and myself on board. We cast off and motored out of the marina to be greeted by a gentle swell and building breeze. I took the helm while Robin raised the sails and pretty soon we were rail down. The little boat came alive  effortlessly cutting through the chop. It was an extraordinary experience. I never dreamed that I would ever see the boat let alone sail on her and better yet with the big man himself.
Before long we saw the media boat steaming toward us and almost at the same time saw the Around Alone competitor, Bernard Stamm aboard his Open 60 Bobst Group emerging from the haze. It was on the edge of twilight and  the colors were softening. We bore off slightly and headed in the direction of Bobst Group sailing on a course to intercept. It was incongruous. A tiny wooden boat that taken Robin safely around the planet, and a massive carbon fiber IMOCA 60 just starting its trip around the world both powering toward each other. Within moments the Open 60 was alongside, Stamm grinning widely, and then in seconds they rolled by. We eased sails and bounced in Stamm’s wake. 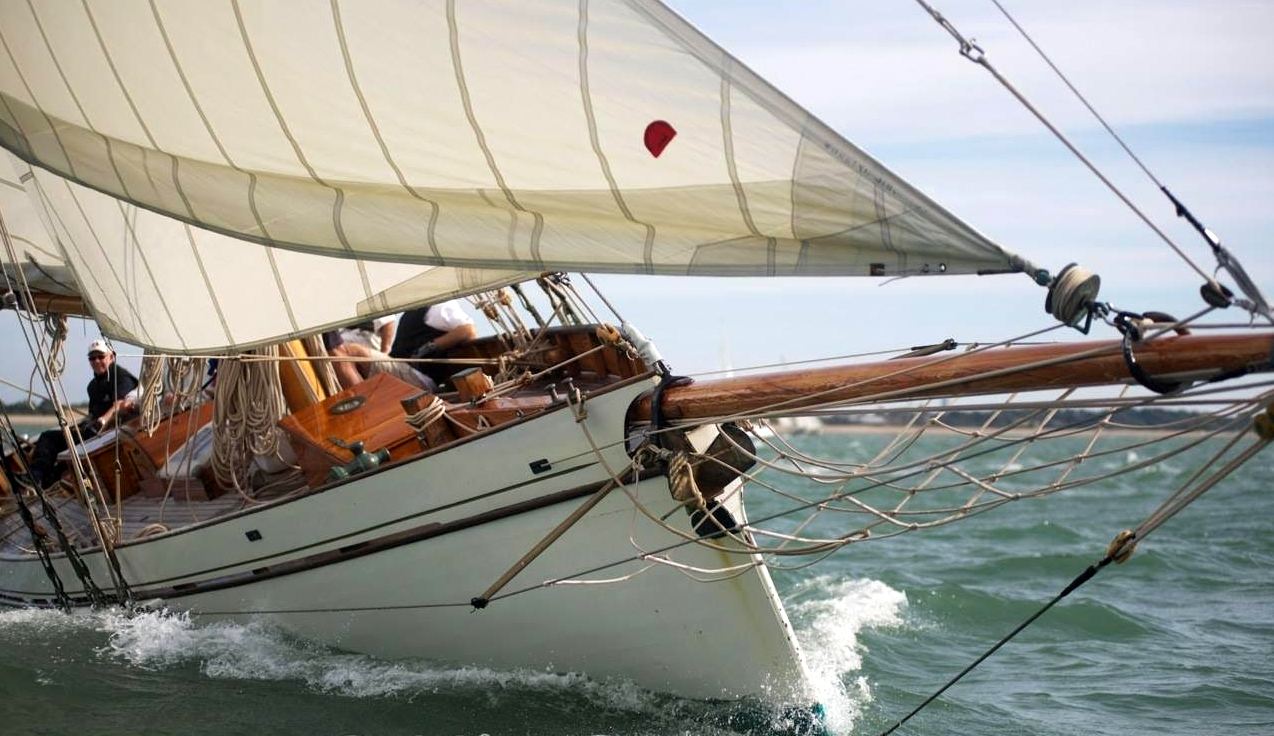 By now the sun was almost on the horizon and on shore the lights of Brigham were coming on. It was an incredible experience. Then it got just a little better. With sheets eased the boat sailed effortlessly, the full length keel keeping it on course without the need to helm. Robin slipped down below and shortly returned with a small hip flask. “Gin,” he said. “Take a drink.” I could see Bobst Group about to cross the finish line. I could see the media boat close behind, but I could barely see anything. I am nothing if not a sentimental person and the very fact that I was sailing on board a boat that I had only read about as a kid, with a man I admired  greatly, was one thing.
Maybe it was the sting of the gin hitting my throat that brought the tears, but looking back I am sure it was just the moment. One of those moments aboard a boat that gets seared into your memory.
I am writing about this now because I recently saw some awesome photos of Suhaili out sailing. The photos were taken by my colleague Nic Compton. Suhaili has been completely restored by Robin and the boat looks amazing. Take a look for yourself and just think about it. This little lapstrake double-ender has sailed all the way around the world. That was 50 years ago, back when the world was flat and the edges sharp. It took enormous courage (I think) to get on board, toss the lines ashore, and head toward the horizon.
Robin did it “for Queen and Country” and 312 days later he and Suhaili returned. Quite an adventure by any measure.
– Brian Hancock, pictures thanks to Nic Compton.

On Board, Criminal Behavior 2