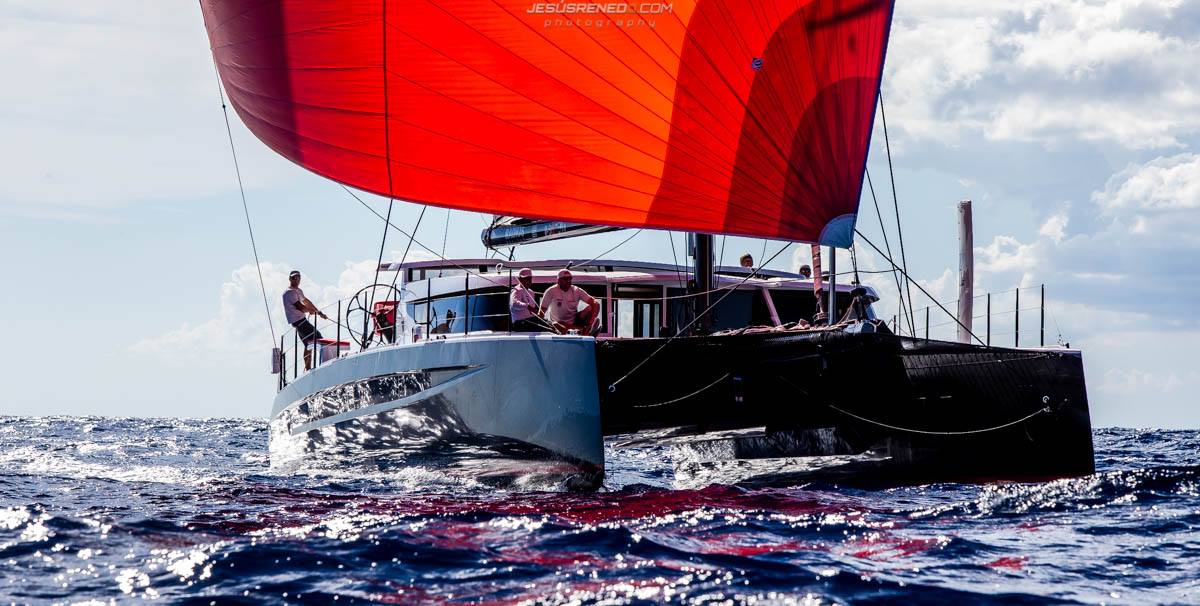 While we’re grateful to have support of awesome sponsors throughout the sport, we’re even more grateful when they have real news instead of just press releases!  Just six months after launch, the first in a new line of Morrelli & Melvin designed, high-performance carbon cruising cats proved her racing prowess, with HH-6601 R-Six winning her first regatta! The six-boat fleet gathered at Port Adriano last week for the inaugural Multihull Cup – a new event designed to provide a fun and competitive regatta platform for 50′ and over performance cruising multis. Other participants included three M&M designed Gunboat 66s: Slim, Coco de Mer, and Outnumbered; the Nigel Irens’ custom 78’ Allegra and a 60′ Bañuls’ MC2 Dragon.

Harry Dunning was named the official rating authority by the Multihull Cup organizers; his complex and impartial rating system takes into account weight, waterline and sail area measurements as well as daggerboard and rudder dimensions. The system sees further adjustment each day based on wind conditions and course length as determined by the race committee.

Racing took place over three gorgeous days, with one race sailed each day. Mostly sunny skies, decent sized wind swell and variable breeze set the tone for an exciting weekend of racing. R-SIX performed strongly each day, finishing third on day one, 12min 34sec behind Allegra and 1min 12sec behind SLIM, third on day two 7min 42sec behind Allegra and 52 sec behind Coco de Mer, and ending the regatta in dominating fashion on day three, taking line honors and finishing 49 sec ahead of Allegra and 5min 55sec ahead of both SLIM and Coco de Mer, who finished within one second of each other. On corrected time, R-SIX placed 1st on day one, 2nd on day two, and 1st on day three.

Aboard were the core crew; the owner and his two permanent crew who’ve been with the boat since it’s arrival in Valencia in June. Four additional crew rounded out the team, including co-designer Gino Morrelli and longtime Anarchist and HH commissioning skipper Chris Bailet. The crew felt their performance throughout the regatta was strong, save for a few tactical and execution errors. Gino surmised that the crew work and tactical calls improved each day, and explained that on day three they seemed to have “found a new gear” and really sailed to their full potential.

The boat itself proved solid, sustaining fewer and less severe breakages than other boats in the fleet. A chafe issue with the Antal line driver on the starboard daggerboard left the board fixed down for much of the race on both day one and day two. Big thanks are owed to rigger Scott, who sailed the regatta as crew on Allegra but worked overtime in the evenings to help address the board issue. Damage reports from the other competitors included a busted hydraulic hose on Allegra, breakages to multiple sails on SLIM, and a busted main halyard on Dragon, among others.
A first place finish amongst a strong fleet of boats that are optimized for performance and well sailed is an obvious testament to the design and build of the HH66. To read Gino’s full race report from each day, head on over to the HH website here, and if you’d like to join in on the mostly uninformed and typically combative banter regarding the event, hit up the Multihull Cup thread in the SA Forums here.

Corona News – over 800 yachts blocked in the Caribbeans

no reward Christophe Launay (www.sealaunary.com) was on hand to catch some memorable shots of poor Thomas Coville after his third attempt at the solo RTW record in three years fell short. Valiant Tom and SodebO were beaten first by a damaged am