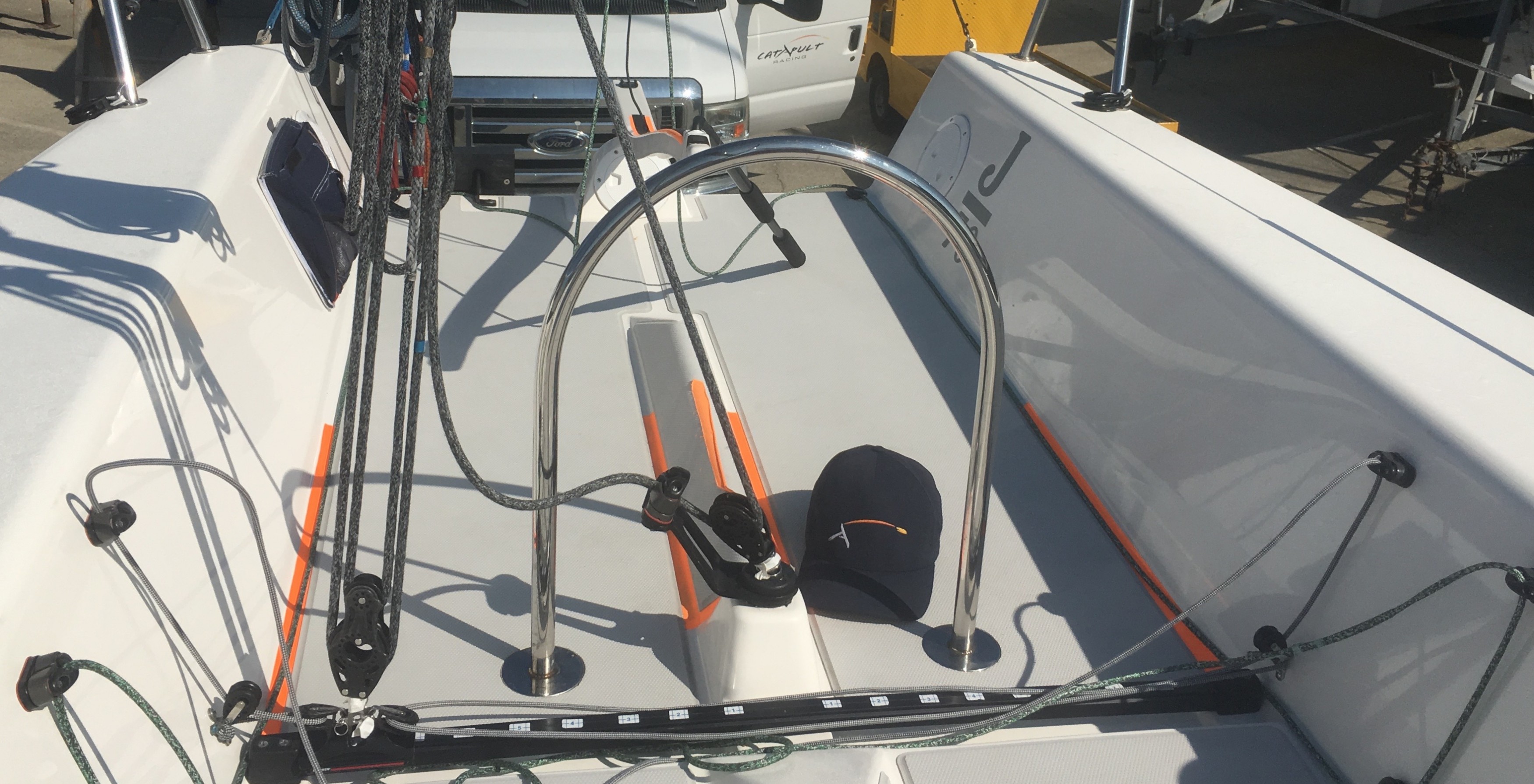 We thought we were going to be focusing on the Etchells Worlds IJ granting the Event Chairman redress for two different UFD scores, but as we were writing that one up, something way better came up for our monthly look at protests and sailors behaving badly.  And it’s a hell of a story.

Julian Fernandez Neckelmann dominated the J/70 Worlds last year with his Flojito and has continued in other big events, and with two of the winningest one-design pros of the past decade as his crew and Ed Adams coaching, Julian ain’t playin’ – he’s in this one for real. But after six races at St. Franny’s Big Boat Series, a much lower-budget team – Joel Ronning’s Catapult – sat tied with Neckelmann in the same water they’ll be racing next week at Worlds.
That’s when Neckelmann – a lawyer, we think – decided he needed to find out more about the stainless hoop you see above in Ronning’s cockpit.  We were told by several people he asked them about it, and several told him they thought it was legal, and even suggested against protesting it.  When Neckelmann saw Catapult tactician John Kostecki on the dock, Neckelmann told him he didn’t think the roll bar was kosher, and Kostecki, ever the communicator, said ‘Protest me.”  Neckelmann did exactly that, and that’s where it gets good.
The Jury asked why Catapult had a non-OEM part on the boat, and Joel calmly explained that bar was installed to assist him from moving from side to side during tacks and gybes.  He also explained that the J/70 rules allow installation of such a device for people with physical disabilities, and that both the plans and photos of the finished part had been signed off by the J/70 Technical Committee and Adminstrator as required by the Class Rules.
At this point, our sources differ on what exactly happened, but a credible one has Neckelmann next asking Ronning, “How disabled are you that you need this bar?”
Ronning then reaches down, unstraps a buckle, pulls his carbon-fiber prosthetic leg off, and slams it on the table in front of god and everyone, shouting “Is this disabled enough for you?”
A differing account says Neckelmann asked why he wasn’t allowed to have the same bar installed on his boat.   Ronning pulled off the leg and slammed it on the table, telling Neckelmann to “Saw off one of your legs and you’ve got it.”
Regardless of which version is true, the whole thing is pretty ridiculous, and sends an awful message to disabled sailors in open classes: Fuck you and your problem.  We certainly know the history that makes top J/70 teams so nervous about cheaters, but handling a protest poorly risks not only pissing off your fleet, but it can earn you new enemies you can’t afford on the course.
We note that Neckelmann has always been a straight talker with us, and was always ethical when we’ve spectated or raced against him.  He told us in an email that he never knew Ronning had any disability until that protest hearing, let alone a carbon-fiber leg; this isn’t that far-fetched given that Ronning is proud of the fact that so few people can tell he has an artificial leg.   Still, we struggle with it, because Neckelmann poached his pros director from the Catapult team.  Bill Hardesty and Willem Van Waay both worked for Ronning on his A-Scow and J/70 for some time and they knew him well;  if Bill and Creature let their boss protest an amputee without telling him about it – well, that’s a great story too. (And speaking of stories, we are hearing about Hardesty’s questionable behavior at Mission Bay Yacht Club a few weeks ago. – ed)
We don’t think Neckelmann is some kind of anti-disabled sailing nutbag, but he’s a fierce competitor, and as he wrote us yesterday, “Some people in good faith and others in bad faith are playing with modifications.  If these moves are legal we want to do them, if they are not, we want nobody else to do them.”  That’s fair.  But protesting a heavy metal bar in a bad place when people told you it was legal…it’s your right, but it’s stupid.
The reality is that Neckelmann’s protest was probably a shot across Ronning’s bow and an attempt to get into the head of a team that can clearly challenge for the world title – a team that already has plenty of bad blood with the reigning world champion.  Top pros play head games because sometimes, they work.  But this one seems to have backfired, and Neckelmann and Hardesty haven’t made any friends with their move; many think they also made their class and the BBS look like shit.
One other thing it did?  It made us pretty excited to watch how steamy this rivalry gets next week in the Berkley Circle.  Nothing fires up interest like a battle before the war.  You can read a full Worlds Preview at the J/70 Facebook Page here.

two sheets to the wind