If anyone ever faced a challenge running a regatta it was the organisers of this year’s China Club Challenge Match in Xiamen China. 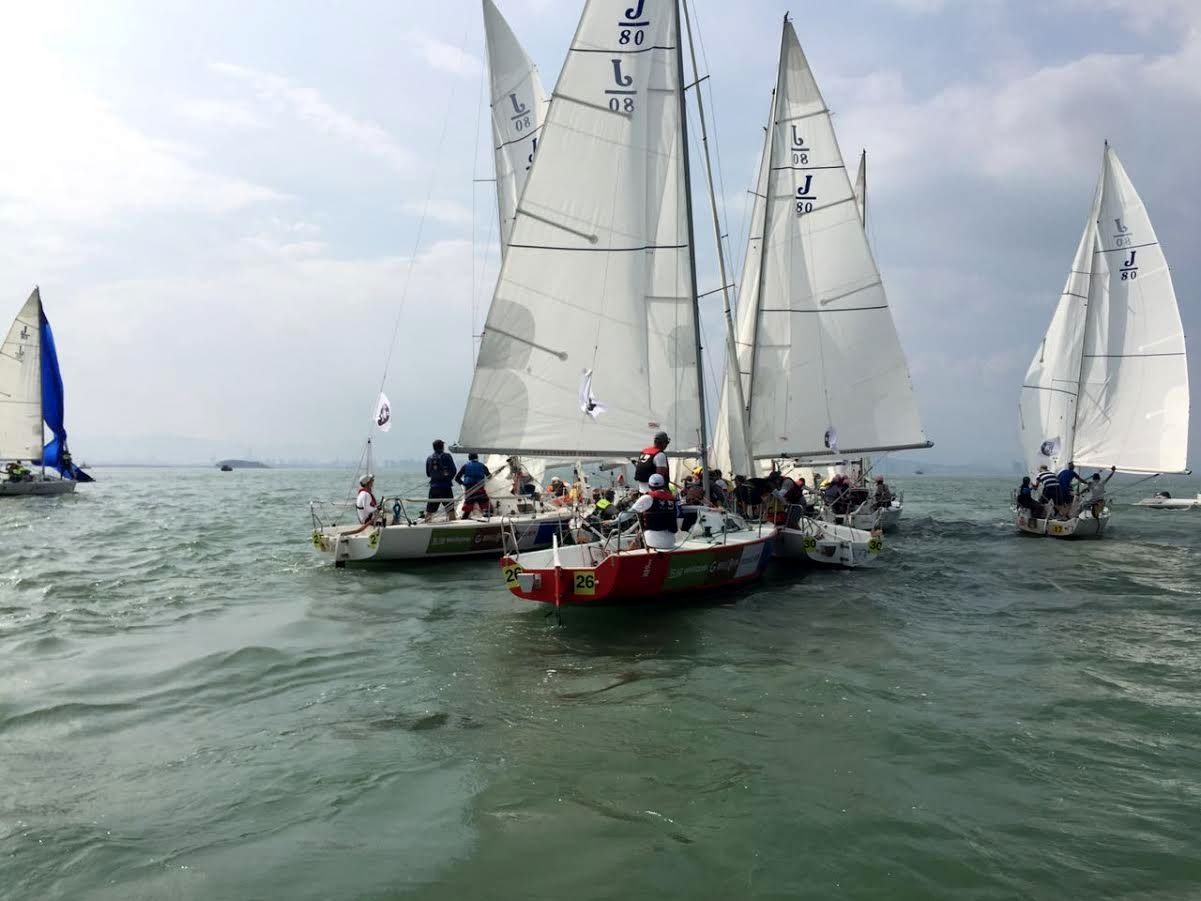 As you will have seen from a recent article just a matter of hours before the practice day Typhoon Meranti descended on the island city. Well descended is perhaps not the correct word, more like fell with a hammer blow. The strongest storm anywhere on earth this year, it devastated, not only the city with clean-up going on as I write and many areas running on generator power or candles but several of the boats due to be used in the regatta were left rig-less, with tattered sails and even one or two sunk at their pontoon berths.
A fantastic effort by the organisers managed to locate – and persuade owners to lend – a further 8 boats to enable the fleet of 30 to compete as one instead of being split into flights.
It wasn’t only the racing boats, this year the J-80, that suffered with umpires having to wait until marks were laid to take over the RIBs for the racing. 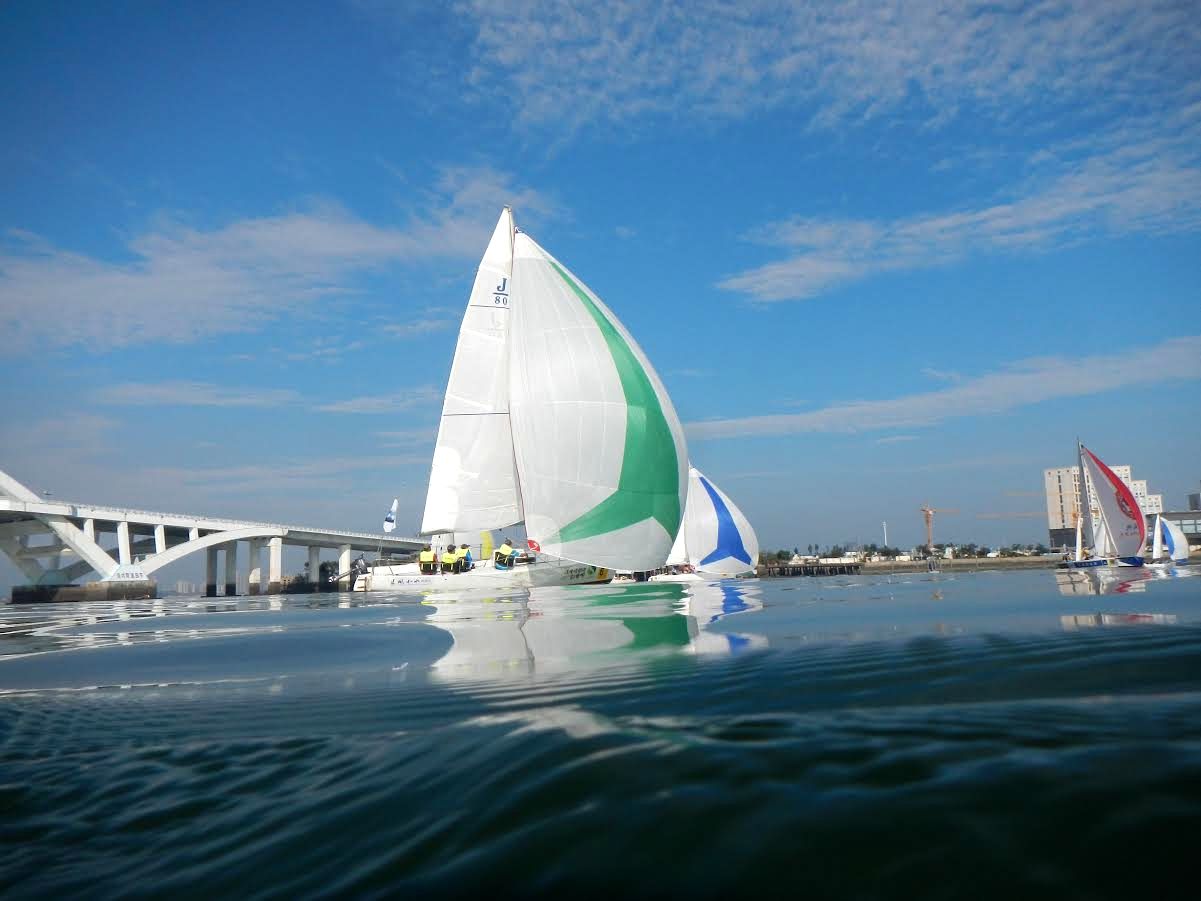 Day 1 saw typical, almost windless, post typhoon weather with Meranti having sucked virtually all the pressure difference out of the atmosphere and with the SI’s amended to show an earliest start of 1300 instead of the intended 1000 it was perhaps a dubious group of sailors and officials that made their way to Wu Yuan Bay. Add to the light winds mid-Autumn spring tides and racing outside in the maid channel was impossible but with an inspired RO decision to race in the bay itself at least the day didn’t end race- less with a race being banked on the less tidal waters just off the marina.
Day two was a little better for wind, but not much. However by cracking on when the opportunity arose 4 races were squeezed out of the light conditions. The lack of wind produced significant bunching at choke points on the course keeping the umpires whistles busy with both red and green& white variety.
Many of these were from the overly enthusiastic production of the prodder at the top mark, with some ‘sticking it out’ halfway between windward and offset mark with the gennaker still firmly down below. This seemed a habit that, even when boats just in front were penalised, some crews couldn’t get out of.
Eventually the wind strengthened and settled in direction so the later races were less of a ‘wind-hunt’.  And so the pattern was maintained on Sunday but eventually the regatta committee managed 7 races enabling them to declare a series.
Like Club Cups of the past, the evening social scene was just as much fun with a highlight being a dinner sponsored by Microlab, the electronics manufacturer involving a Chinese dice game where the prizes were nice Bluetooth sound systems. On our table many won prizes while freely admitting not having the slightest idea just how we were winning. (like a few sailors I know)
The top eight teams from this weekend’s efforts return in early November’ for the match race element of the Club Cup, once again a fully umpired event.
The final night’s prizegiving was excellently won with a gracious hostess, great food, free-beer and a new prize categories. 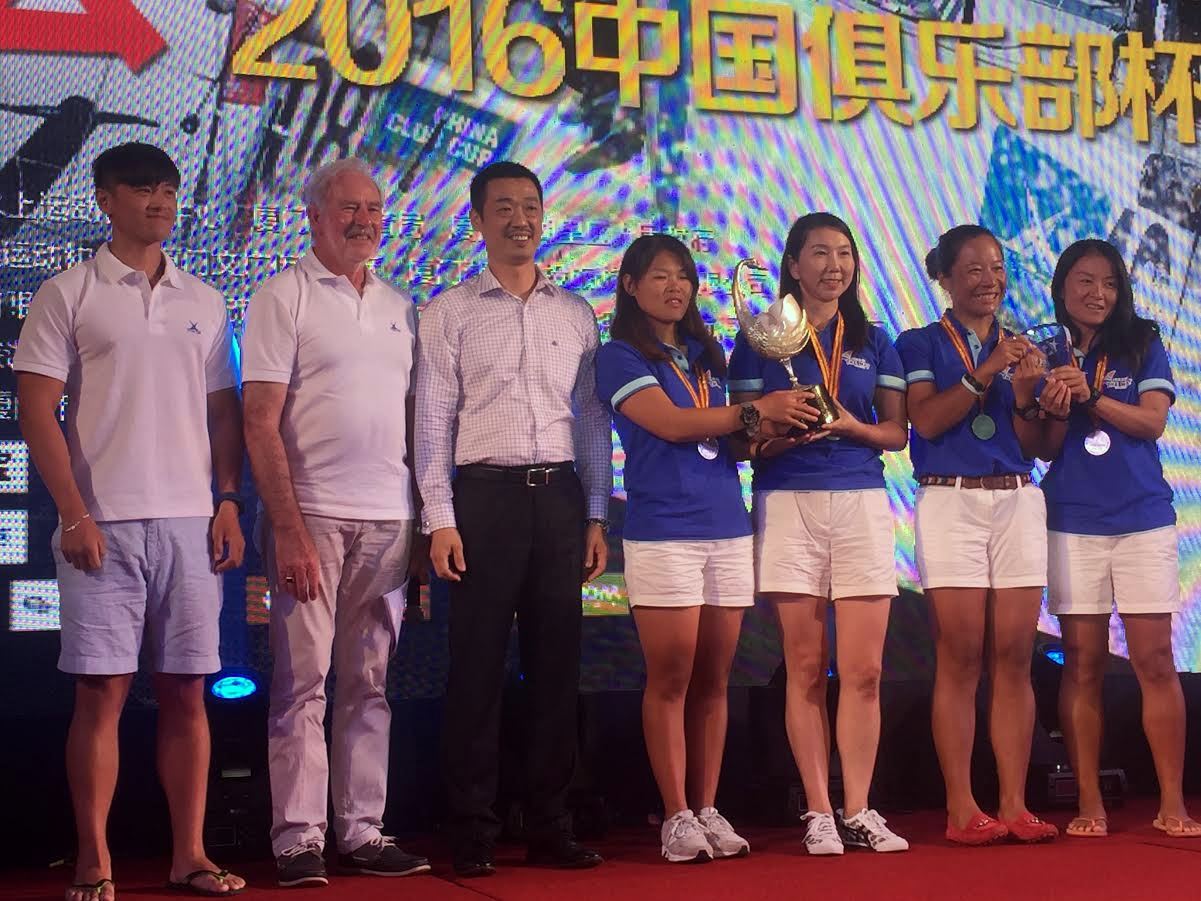 For the first time there was a ladies prize – that’s certainly one way to attract women into our sport – along with separate podiums for pro-sailors and amateur sailors, a clever way to spread the spoils.  The winners of the inaugural Ladies Prize was Luther Female Sailing Team with the amateur podium being 1st; Xiamen University Jetpon Team, 2nd; Yunnan Fuxian Lake Team and 3rd; Whitewave Sailing Center.
Over to the pros, in 3rd place was the Wind & Water Club; 2nd was Sea Blue Team with the podium topped off by J-Boats Racing Team from Xiamen.  At least when the top eight return in 6 weeks time it won’t be into the aftermath of a weather system like that experienced last week.
Shanghai Sailor