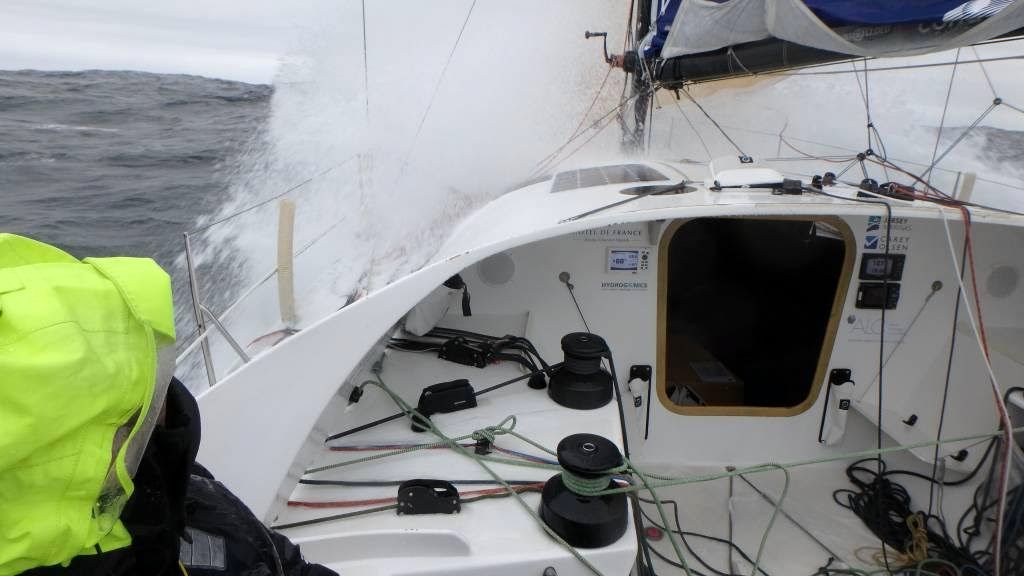 Phil Sharp is crushing it  in the record 30 Class 40 boats on the start line of the Normandy Channel Race, a double-handed 1000nm zigzag endurance adventure starting and ending in Caen.
“Currently we’re screaming down a wave at 20knots, and averaging between 18-19knots, it’s insane, the boat is like a wild animal! It’s seriously windy, rough, and the sky is grey and dull. We didn’t expect this amount of wind as the forecast completely underestimated the force, but it’s definitely an exciting surprise!
“Last night was mad coming around Fastnet in the dark, and the conditions are still massively intense. Since then we’ve had to change sails twice to downsize to better cope with the ever strengthening wind, which uses a huge amount of energy, especially because the sea is so rough as it forces you to work twice as hard.
“At the moment we are reaching at a really fast angle and the boat is just accelerating down waves with serious speed. The motion is awful, it’s really violent, we are being thrown around so much that sleeping is near impossible. We literally haven’t stopped, and the amount of winching is phenomenal, it’s physically exhausting. Under the circumstances we are doing our best to manage our energy, thinking ahead for strategic decisions, which makes things interesting when the weather forecast changes!
“Going forward the forecast has changed for the worse, giving us more upwind through the Scilly Islands and Traffic Separation Scheme (TSS) course. Getting through this cleanly will rely on sound tactics as we will probably have to make multiple tacks, and each tack could be the difference between losing or gaining miles”.

we have lift off

bring in the clowns