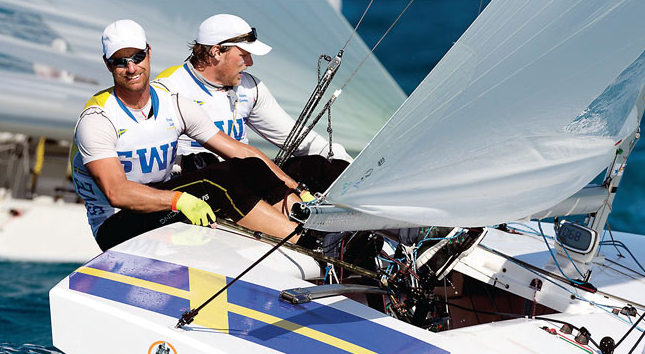 For the past few years the Star Sailors League (SSL) has been attracting some of the biggest names in sailing to compete at some of the fiercest but most friendly grand prix events anywhere. In 2013 Olympic medallists and America’s Cup legends came together to create the League, using a ranking system based on the tennis ATP Tour.
The League has already attracted some of the sport’s greatest talents, including Robert Scheidt, Bruno Prada, Jochen Schümann, Torben and Lars Grael, Mateusz Kusznierewicz, Mark Reynolds, Diego Negri, Xavier Rohart and George Szabo.
Having for too long been the Olympic Finn ‘nearly man’, Lööf grabbed the Star gold medal in the final race in Weymouth. The fast Swede has now joined forces with his Finn and Star nemesis Iain Percy at ArtemisThe climax is the SSL Final which take place in Nassau in the Bahamas at the end of the year. A prize pot of $US200,000 is up for grabs, with $40,000 for the winner.
Just as there are four major Grand Slam events in professional tennis, the long term aim is to bring in four Grand Slams to the SSL. It trialled its first SSL Lake Grand Slam in Switzerland last year, and the first SSL City Grand Slam in Hamburg last May. Each Grand Slam offers a prize pot of $100,000 and a winner’s cheque of $25,000. Read on.
Title inspiration thanks to Nelly.

yeah, that was close