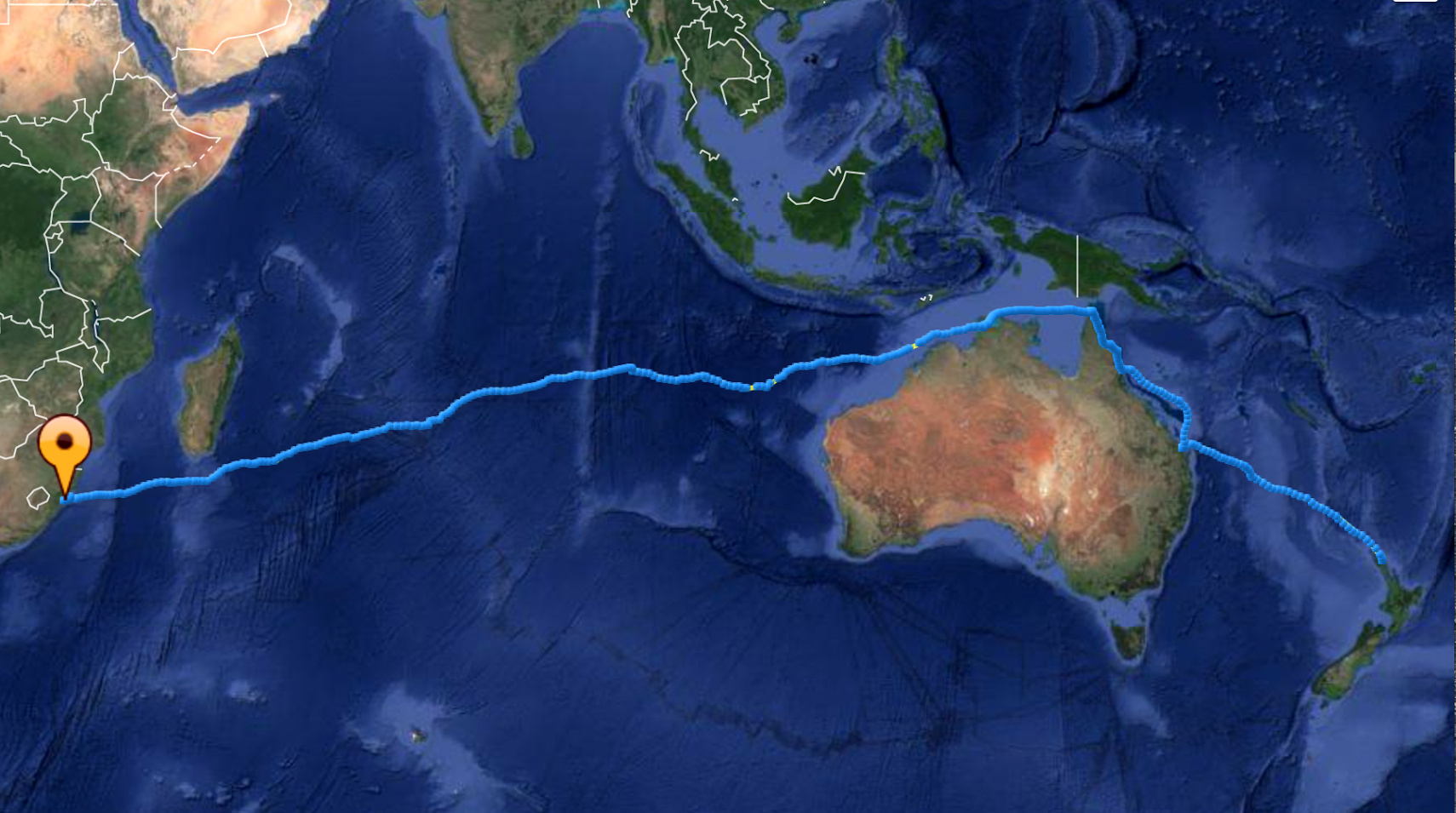 While Mark English and Ian Rogers were on their way to victory in the Pacific Cup on MAS!, MAS!’s old carbon fiber tiller on my Moore 24, GANNET, was crossing the Indian Ocean, 6,000 miles, 100° of longitude, from Darwin, Australia to Durban, South Africa, non-stop. GANNET did not match MAS!’s speed, though at times she did surf down waves at twelve+ knots.
The passage mostly was made in too much wind or too little. Three gales, including a 50 knot one at the end, saw the little boat lie ahull three times. In between we often had less than 5 knots of wind and went slow, even though with the new North G2 set we sailed at or near wind speed.
One problem was ongoing tiller pilot failures. When we left New Zealand in late April we had four tiller pilots. When we reached Durban we had one, and that only because I saved it by using sheet to tiller self-steering for most of the passage. Of the 9,000 miles GANNET covered from New Zealand to South Africa in four months, about 7,000 were done with sheet to tiller steering. This requires some of the mainsail to be set as well as some of the jib. Even a triple reefed main was sometimes too much, and I am going to have a fourth reef sewn in the sail here in Durban.
One wave caught GANNET perfectly and rolled her masthead in the water, bending the Windex to one side and causing the Raymarine wind unit eventually to fall off. This happened in the morning when I was sitting in a Sportaseat in my usual place on the cabin sole. I was well wedged in, but lots of stuff that was not tied down flew around, and there were an unusually long few seconds while GANNET hung there, pressed down by the wave, before it released her and she popped back up.
This is the fourth boat whose masthead I have put in the water. Not a distinction to which I ever aspired.
We have done exactly what we planned to do this year.
GANNET will remain in Durban while I fly back to the Illinois flatlands to spend time with Carol and watch the Cubs win the World Series. I’ll return in January, haul and antifoul, provision and sail on.
Time and chance permitting, America next year, though exactly where or even which coast is not yet certain.
One account I read of the Pacific Cup referred to the “humble Moore 24”. I think not. Small, unquestionably; but is a Stradivarius violin humble just because it is not as big as a double bass? What other forty year old design simultaneously blasts across the Pacific and goes six thousand miles across the Indian Ocean?
The Moore 24 is a masterpiece. – Webb Chiles.