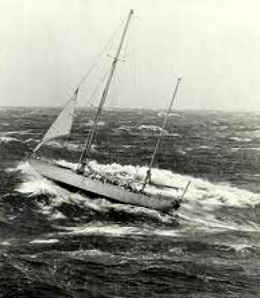 It was 50 years ago this week that Francis Chichester set sail from the south coast of England bound for Cape Horn and a single-handed lap of the planet. It was a voyage that changed sailing history. When Chichester returned to England in May the following year he was given a hero’s welcome and indeed he deserved it. The former aviator was greeted by a crowd estimated to be around a half million people and later he was knighted by the queen who used the same sword that was used honor Francis Drake. His was the first solo circumnavigation that took in the five great capes and his accomplishment inspired a new generation of offshore sailors.

It’s worth noting that prior to Chichester there had already been some extraordinary circumnavigations including the very first solo circumnavigation by Joshua Slocum in 1895, but Chichester was the first to round Cape Horn. Slocum sailed through the Strait of Magellan. In 1932 the American sailor Harry Pidgeon circumnavigated twice single-handed but he went through the Panama Canal. In 1962 the New Zealand sailor Adrian Hayter became the first person to sail around the world in both directions but he too went through the Panama Canal. Indeed almost 20 people had sailed around the world single-handed before Chichester, but his voyage aboard Gypsy Moth was the one that changed things and there was a number of reasons for this.
Chichester was already well known before he set sail and he had plenty of heavy sponsorship but the key was that the media was excited by the prospect of what then was considered an elderly person taking on such a monumental challenge. The BBC did extensive coverage as did the the Sunday Times and The Guardian newspapers. This was no trip done in obscurity; this was a well publicized and well televised trip that was able to capture the imagination of the entire British public. And thankfully so because his trip inspired the Sunday Times Golden Globe Race, the first solo, non-stop circumnavigation race which was won by Robin Knox Johnston. That race in turn inspired the first Whitbread Round the World Race and look where that event stands today. It’s clearly the premier fully crewed offshore ocean race in the world. One has to wonder how long it would have taken for offshore ocean racing, especially the races that lap the planet, to become popular had Sir Francis not had the media coverage that he did have. It would have happened eventually I am sure.
There are a couple of things to take away from Chichester’s voyage. At the time simply sailing alone around the world was considered an enormous accomplishment. These days a solo circumnavigation is regarded as fairly commonplace. Indeed the Australian sailor Jon Sanders became the first person to sail twice, non-stop, solo around the world. When Chichester finished his trip he was 65 years old, considered at the time to be quite old for such an arduous voyage. In 2011 the Japanese sailor Minoru Saito returned from his solo circumnavigation, and at age 77 was the oldest person ever to sail single-handed around the world. To make it more interesting for his eighth (yes you read that correct) eighth circumnavigation Minoru decided to do the trip the “wrong” way. Against the prevailing winds. In fact sailing around the world either alone or with crew has become quite routine. One has to wonder what offshore ocean racing is going to look like 50 years from now.  I probably won’t be here to see it but I am certain it’s going to be quite awesome.
– Brian Hancock.