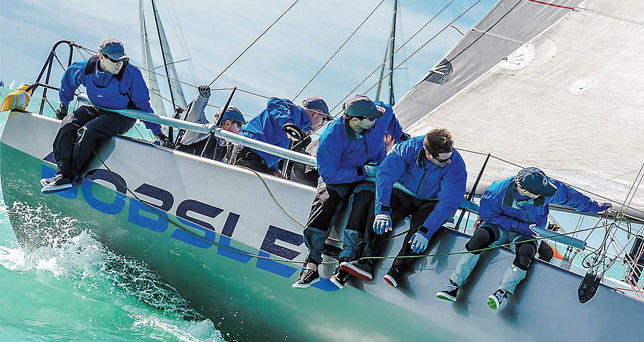 For 30 years racing at the tropical island of Key West has been a midwinter dream and a mainstay on the international calendar: while the rest of the Northern Hemisphere freezes the participants at Quantum Key West Race Week have enjoyed five days of competition in the warm blue-green waters at this ‘southernmost point of the USA’.
Main picture: Great boat and glorious Key West colours… 2016 saw the first class start for the new C&C 30, with Bobsled winning the prize for the best-looking paint scheme. The C&C 30s do seem to be edging ahead in the battle of the modern 30-footers that have appeared over the past three years. We look forward to hearing the reports after their first proper offshore contest…
Within the first decade this event that started as a mostly fun series among casual racers has since seen the level of excellence in both competition and race management increase to where this is now regarded as one of the world’s top international regattas.
Last year’s 29th edition was managed for the first time by the Storm Trysail Club, who introduced some new features to help attract a growing audience of participants among both the serious and the casual handicap racers. These included a Navigator’s class for cruisers and multihulls who wished to race only once a day, and two new club classes to replace PHRF. Those features will return in January 2017, along with racing on three course areas for ORC, IRC and the numerous one-design classes who form the majority of entries. Read on.