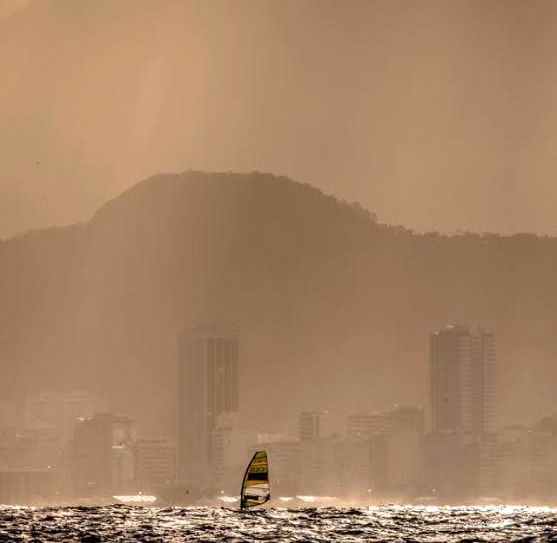 So with most classes at or a few races from their medal races, how has the Olympic Regatta panned out so far.

Gone to plan in a number of classes with Van Rysselberghe (NED) defending his London title and long time campaigner Dempsey (GBR) securing a Silver. Bronze still very much up for grabs with 3 sailors (POL)(FRA)(GRE) within 4 places in the medal race – eyes out the boat there, or should I say eyes off the board.

Giles Scott (GBR) in the Finn, after a start not unlike the guy who kept him out of the Olympics (Ainslie). THE 17th seemed to wake him up and the next 7 races saw him slipping off the podium only once, 17 points back is Zbogar (SLO) with Lilley (AUS) a further 9 points on that. Don’t write off Postma (NED) or Gaspic (CRO) who are both used to being at or near the front of the Finn fleet but barring a slip up Scott should be able to add Olympic Gold to his 4 Finn Gold Cups.

THE other pre-event favourites ‘doing the business’ are Burling & Tuke (NZL) in the 49er with 6 races in (half the event) in pole position with Heil and Ploessel (GER) just 2 points behind keeping them honest. There is then a 15 point gap to the Poles Przybytek & Kolodzinski (glad I typed that and didn’t have to try and say it) Those next 7 teams which include the fancied Outteridge and Jensen (AUS) are covered by just 10 points.

In the Laser Radial the form book is also being replicated with Marit Boumeester (NED) World Sailing ranked number 1 goes into the medal race with an 8 point cushion. Not unassailable with Rindom (DEN) and Murphy (IRL) within striking distance. If you remember Annalise Murphy was the unfortunate sailor who came away from Weymouth with the ‘leather medal’ after and epic medal race off the Nothe, perhaps Rio might supply a medal. Van Ecker (BEL) back in 4th and Tenkanen (FIN) shouldn’t be discounted for a medal chance either.

Sadly (from this author’s point of view) Xu LI Jia’s comeback from 2 years out studying in the UK was too steep a hill to climb. Added to this she was carrying a shoulder injury and 3 DSQ’s certainly didn’t help her cause.

Over in the Lasers the world ranked No 2 Stipanovic (CRO) is 10 points clear with only Burton (AUS) a threat to his Gold Medal – expect some match racing there – but Burton has to be careful as his cross Tasman rival Meech (NZL) could benefit as a result but has to finish 5 places clear of Burton to secure silver. This one could be exciting. World ranked No 1 Buhl (GER) did not even make the medal race.

In the Nacra 17, 4 times world champions and world ranked No 1, Besson & Riou are back down in 7th although they started to fire on all cylinders with 2 bullets on the last day of racing. The top 3 places are filled by Waterhouse and Darmain (AUS), Lange & Saroli (ARG) and Sexton & Groves (GBR) with just 11 points covering the first 6 teams and 3 races to go. Too close to call this one.

Over in the men’s 470, Belcher & Ryan (AUS) haven’t quite yet risen to the top but are just 2 points behind Fantela & Marenic (CRO) but they (the Croatians) are the form team having knocked the Aussie team off their top spot in the world rankings. And the form book continues its accuracy with world ranked No 3, Patience and Grube (GBR) currently lying in bronze medal position.

Early days in this fleet too with just half the scheduled races sailed – all to play for.

Over in the Women’s 470, early leaders Yoshida & Yoshioka (JPN) have been overhauled by Mills & Clark (GBR). The top 10 is full of people in a similar position in the world rankings but in a jumbled order showing how competitive this fleet is/ One surprise is that the NZL pairing of Aleh & Powrie are back in the lowly position of 6th  and that having scored 2 bullets. Having said that, this class is only half way through its quota of races and the difference between 1st and 6th is currently just 6 points – this one is not over yet.

That just leaves the RSX Women, and this could be the most exciting medal race of them all. 9 or the 10 finalists have a mathematical chance of a medal NINE!

The rankers are there but truly mixed up. Ranked 4 is leading, 6th is first, 1st is just 8th anmd so on but most of them are there

Up top is Tartaglini (ITA) but only on countback and with Elfultina (RUS) on level points we should be able to see a match race, or will we? Chen (CHN) who scored bullets in the last 3 races of the series to rocket up the table, Picon (FRA) and Davidovich (ISR) are ALL just 5 points (3 medal race places) behind the two leaders and the next 4 racers all have a chance to snatch a medal if the women ahead of them falter badly – edge of the seat stuff this one. Watch out for some VERY tactical sailing with heads on swivels and wheels going round inside heads.

Overall who is going to top the medal table? GBR? AUS? Perhaps even NED because as Mr Graham Burrell reminded us in his bitch about a previous article that in spite of what Pierre De Coubertin said “The Olympics is (sic) about winning medals”. Of course it is Mr Burrell –  if you are a medal winner! To the other 9,000+ athletes, it is taking part. If there is no competition there is no winner.

I do also not that apart from one class (which still has 5 races to go) Team GBR is on track to maintain its unique record of appearing in every single medal race since the format was adopted. 42 out of 43 isn’t bad.

Still some exciting competition to go and I would just like to finish with a small element of defence of Team USA which has been getting some flack on this site. 4 boats are likely to be in the Medal Race, (three have made it so far – ed). Do not forget the medal race is the equivalent of an athletics final and to qualify for 40% of the Olympic finals in any sport should be no shame. Yet, for US Sailing to state, “After six days of racing, the U.S. Olympic Sailing Team is in the top ten in five of ten classes” is hardly the Gold Standard of achievement. In fact, it is a spin on what many would call a dismal performance. Yes, there are some very good sailors there, but the US Olympic sailing platform clearly is not working.

Yes we always want “our team” to do better and as a Brit I am rather spoilt by the RYA’s sausage factory of success!