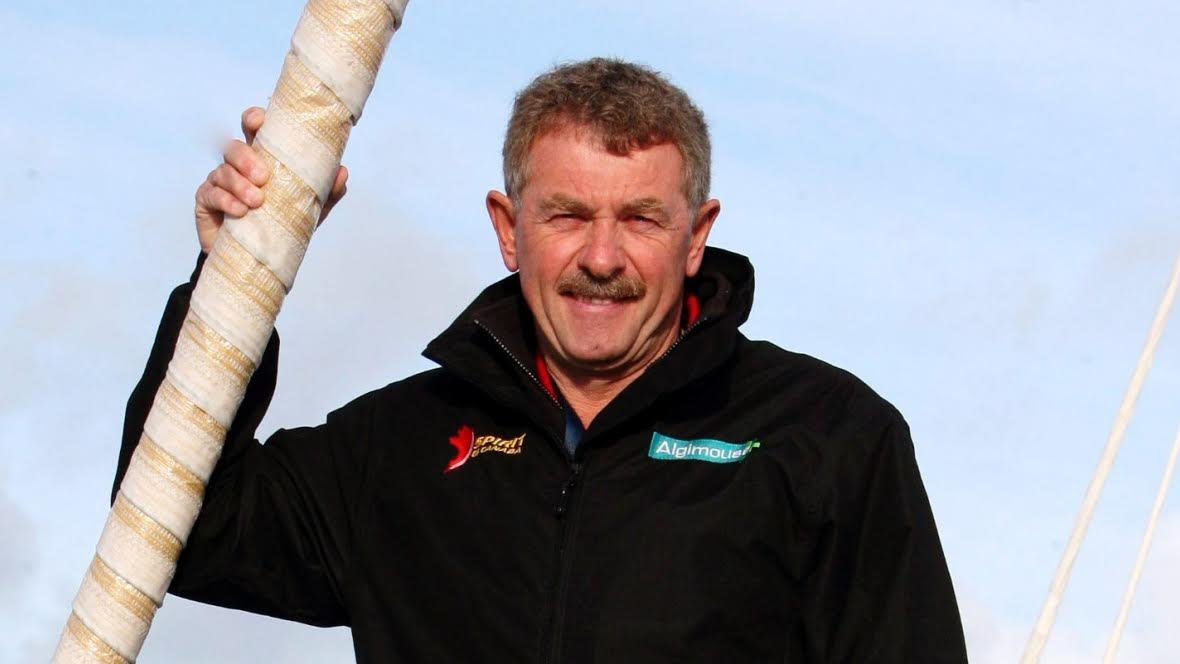 Sailors around the world, especially those from the short-handed sailing community, lost a great friend and sailor when the Canadian solo sailor Derek Hatfield died suddenly this past weekend. Derek was a very close friend of mine and his death is a sudden and tragic loss. I was lucky enough to ghost write a memoir for him and I know about his life as a RCMP (Royal Canadian Mounted Police) before he chucked it all in in search of a career as a solo sailor. I knew of the drug busts that he carried out in the middle of corn fields where deals were going down, but I also knew intimate details of some of his harrowing sailing exploits like the time he pitch-poled at Cape Horn.
So instead of trying to remember everything Derek did and stood for let me relate that one story for you. It will give you a measure of the man.
Derek was participating in the 2001/02 Around Alone aboard his 40-foot boat “Spirit of Canada”. He was approaching Cape Horn in a full gale hand steering because the auto-pilot was not able to keep a straight course. He had been at the helm for almost 24-hours but once abeam of the light on that famous landmark he slipped down below to send me a message that he had rounded the Cape. I was part of the media team for the race and would use his message to update the race website. In the couple of minutes it took to send the message the boat started to careen out of control and before Derek could disengage the auto-pilot the boat took off down the steep side of a cresting Southern Ocean roller. “The boat just keep going down,”
Derek later told me. “The bow buried, the stern came up and just kept on going until the boat was vertical in the water then it fell to the side and was upside down. As we went over I suddenly remembered that I had not clipped back on. The boat landed on top of me and I could hear explosions in the water and knew it was the mast snapping. I was frantic to try and get out from under everything but I was trapped. Suddenly there was a lurch and the boat came upright and scooped me back on board. I was washed back into the cockpit. The whole thing from when I got back on deck after sending that message had not taken more than 30 or 40 seconds.”
Hatfield was abeam of cape Horn in a full-on raging gale without a mast and to make things worse there was a small fire below. His inverter had caught fire and the cabin was full of smoke. He managed to quash the fire and luckily his satcoms were still functioning and he got off a short message that he had capsized, was dismasted, but that he was OK. That was it. Nothing more from the boat for many agonizing hours as we waited for news. There was no way to rig a jury rig but luckily the engine was working and Derek was able to motor slowly into the lee of Isla Deceit, a small island to the east of Cape Horn. He used the lee to straighten things out and to plot a course through the archipelago to Ushuaia in the Beagle Channel.
It would have seemed to any other person that the gig was up and his race was over but Derek was not just any other person and the Around Alone was not just any other race. It was a tight community that banded together when needed. Without going into too many details one of the sponsors of another boat in the race fronted money for a new mast which was built in Argentina and delivered to Ushuaia. Derek did not make it to Bahia where the third leg ended in time for the restart, but he did make it to Newport for the finish and to complete his first of two solo circumnavigations.
We are going to miss him and his soft spoken manner. Few were more generous with their time and encouragement. Derek took the discipline and skills he learned as a RCMP and applied them to offshore ocean racing and the sport is better for it. RIP my friend. You deserve a good long off watch. – Brian Hancock.