youy've never heard of it 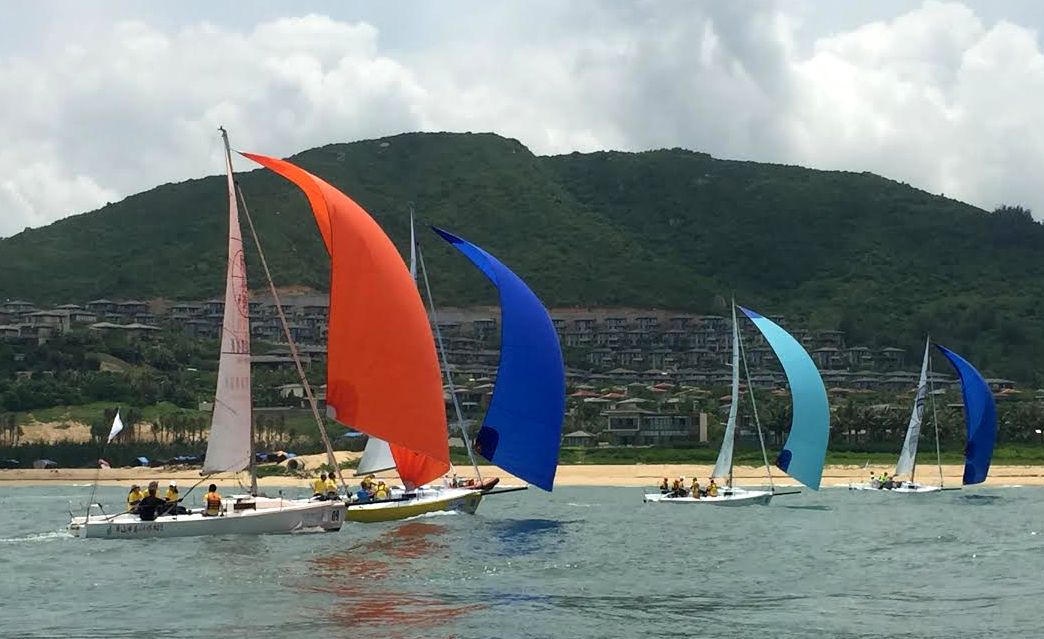 Lingshui is not a venue that will be familiar to many (if any) anarchists, even if they did do rather well at school geography. Probably not even familiar to many Chinese but this past weekend it was the venue for the first ever R&F Bay Regatta sailed in J80s.

The venue is a custom built marina at the mouth of a small river on Hainan surrounded by an upmarket real estate development, the seas are blue, as are the skies and the wind produced a variety from 8 through to 12 knots over the weekend.

Again, for those who are not so hot on their geography, Hainan is China’s tropical island in the south so given that, and the month being July, it was cooking. So being on a RIB that could occasionally charge around creating apparent wind was most welcome

Add to the equation 10 competitive teams a competent and organised RO and a judge team drawn from the UK, Taiwan and China doing their business on the water and you have the recipe for a great event.

A total of 9 races (10 if you include the practice race) produced some close racing with never more than minutes covering 1st to last.

In the end the spoils went to Shen Sheng and his team “Big Boys Sailing” but just a single point behind in second was Team Cnsailing led by Yu Zheng with local team Hainan Luke completing the podium. Spoils worth winning too with 1st slot picking up RMB 40,000. Not quite WMRT territory but worth coming for.

The judges were kept busy, but it has to be said they were mainly busy watching as their presence certainly seemed to keep most sailors ‘honest’ with most penalties coming from ‘early poles’, that being where some boats stuck the bowsprit out while it was still not possible to fly the spinnaker. A far cry from some of the tricks and treats that have gone on at some other regattas.

Apart from one exception, the penalties were taken in full acceptance (they know who they are). A couple of queries “why?” or “why not?” which are totally acceptable with only one team trying to convince the judge they had not seen what they had seen – not smart.

The prizegiving was on a stage erected on the beach and the get together dinner was at a restaurant a short walk away – again relaxed, friendly and a not overburdened by speechifying.

Not the, often witnessed, razzmatazz with the sponsor dominating the event instead of supporting it but a well run regatta complete with prize money.

The event was even streamed live on day 1 by LeTV which had an average of over 16,000 viewers peaking at over 70,000 over the 4 ½ hours of coverage – that’s better than some high profile events in the west.

It is difficult to find a criticism of the event or the organisers so I won’t bother.

Let’s hope the sponsor got enough ROI and feel good from the regatta as this was definitely one worth repeating.
– Shanghai Sailor

blowing up the sunshine