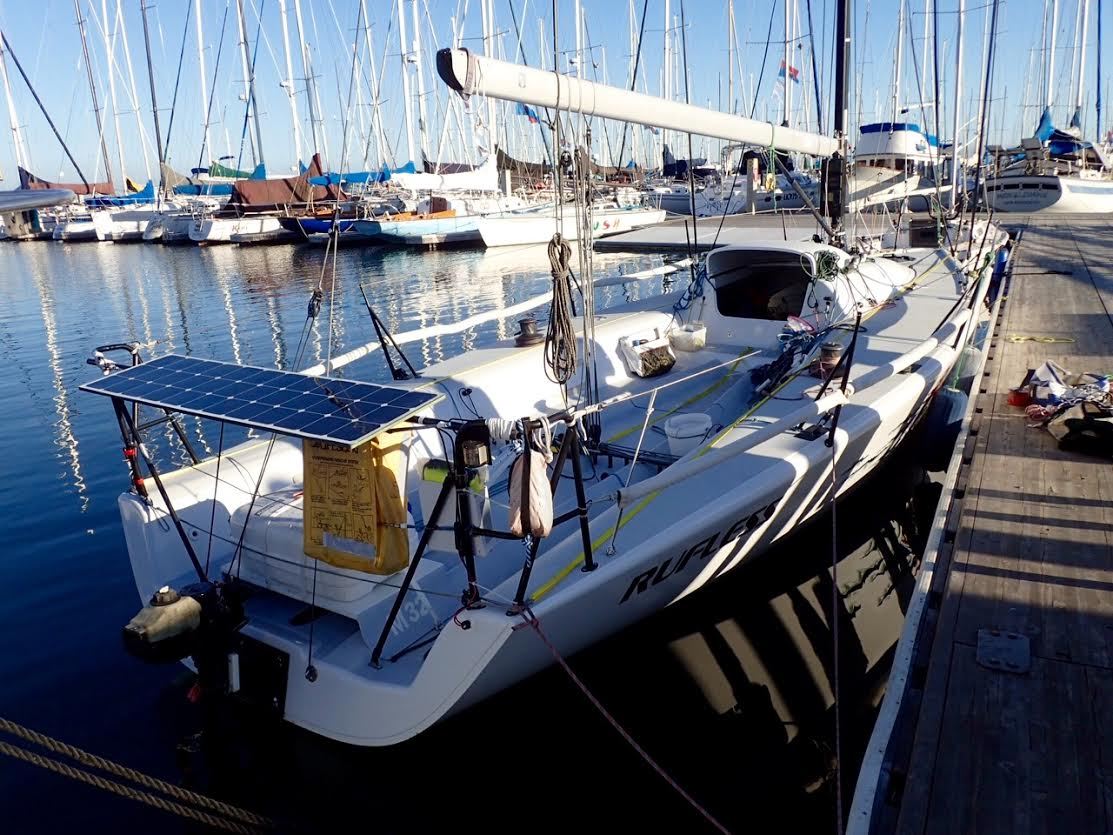 At Sailing Anarchy, we love bucking the conventional norm. A site who’s motto is “where the status quo blows”, we’ve always loved the somewhat quirky Pacific Cup race from San Francisco to Hawai’i.

Lacking the traditional formalities of the more prestigious ‘Transpac’ race, the Pac Cup labels itself as ‘the FUN race to Hawaii’ and is a “run what ya brung” affair built around inclusiveness and participation.

As a result, people bring pretty much anything and everything to the starting line of Pac Cup, which is clearly evidenced by the tiny green Moore 24 Mas! which started in yesterday’s first start and currently leads the fleet overall on corrected time. Built with pride by stoned hippies in Santa Cruz some three and a half decades ago, Mas! is just the latest in a long line of Moore 24’s and other locally built ultralights that have been a staple of the Pac Cup since the race’s inception in 1980.

In the wake of the Moore 24 – still one of the biggest one design fleets in San Francisco Bay – being charged offshore to many Pac Cup and Singlehanded Transpac victories for decades now, we have begun to witness a trend that we absolutely love; taking fast ultralight inshore one-design boats and sailing them balls to the wall in the open ocean. Having just recently watched in awe as Randy Miller and crew absolutely crushed the ‘Race to Alaska’ in a Marstrom 32 catamaran, we were stoked beyond belief to see a different kind of M32 signed up for the Pac Cup.
As recent aficionados of the Melges 32, (like fucking bat-shit crazy for the things! – ed) arguably still the measuring stick for what a fast sportboat should be and what a good one-design boat can and should be, we are watching with bated breath to see what happens when the Melges 32 ‘Rufless’ takes on the Pac Cup in what we believe to be the first Melges 32 to ever tackle a major Category 1 ocean race. Making this particular effort even more interesting and exciting was when we got to know the boat, the owner and the crew of gangsters that will attempt history this week, beginning on Thursday at 1:10 pm PDT.
When we first heard of a Melges 32 being entered in a Hawaii race, our first thoughts were “that’s frickin’ awesome…. right?”, to be quickly followed by “that’s crazy… do they have ANY idea what they’re getting themselves into???”. Turns out, the answer to both questions is a resounding yes. Purchased out of retirement by renowned Bay Area boat builder Rufus Sjoberg, the boat started life as the Melges 30 ‘Muddy Waters’ in San Diego. Brought back up to Rufus’ Quality Care boat shop in Richmond, CA, the boat received the full Rufus treatment in a long and tedious process that spanned more than a year. When he wasn’t busy working on client’s boats, raising his family or jet-setting to exotic locations to work on the likes of Team Alvimedica in the last edition of the Volvo Ocean Race, Sjoberg spent the better part of a year bringing his Melges back to life. First, the Melges 30 spar was scrapped in favor of a 32 rig before custom carbon bulkheads were built in and adapted to fit the 32 rig. The keel trunk was beefed up, custom bunks were built, a dodger and new deck layout fitted on, nav station built in and more to reflect Sjoberg’s blue water ambitions.
From a mothballed and delaminated piece of shit to a fully pimped offshore-spec Melges 32, ‘Rufless’ was born. After hitting the water in 2014, ‘Rufless’ came out swinging in 2015 and proved herself to be a weapon on the race course, handily claiming the 2015 OYRA (offshore yacht racing association) season championship. After two years of extensive sailing and nearly twice that long re-building and maintaining it, Sjoberg has become intimately aware of his boat and equally confident in it.
“You know, everyone thinks we’re gonna die, but the boat is strooooong”, insists crew member Ruben Gabriel. And apparently it’s got wheels, too. Routinely capable of hitting speeds in the mid-20’s and sitting on boat speeds of more than 20 knots sustained, ‘Rufless’ is predicted to put up some big numbers, make that huge numbers in the Pac Cup. After strong coastal northwesterlies foreshadow a fast start, a very northerly Pacific High opens up the possibility of a near straight line course to Hawaii with the potential for some tropical storm or hurricane-reinforced trades upon approach to Hawaii. According to currently forecast weather models and the boat’s impressive speed potential and polars, the computer insists that a crossing of six and a half days is possible. With a custom inventory of fresh Doyle’s, an ultra-fast whip that has been dialed to the nines and a boat chock full of world-class talent and good helmsmen, we’re expecting big things out of this relatively small boat in the Pac Cup.
If they don’t disintegrate at blinding speed, the boys stand a very good chance to be in it to win it on corrected time, reach the barn ahead of most of the fleet and break War Pony’s eight days and change record for sub-40 foot boats. At any rate, it should be fun to watch. Follow along on the tracker here, and stay tuned to the front page and the forum thread for all the Pac Cup dope that you can handle. If the boys have a spare minute while underway and aren’t fully stacked on the windward aft quarter, Clean hopes to get a few updates from avowed Anarchist and Mothie Johnny “nugs” Goldsberry.
I’ll be a few days behind on the pointy end of the Swan 42 ‘Elusive’, hopefully fighting for a division win against that pesky Melges 32 that has to race against a slower fleet of 40-50+ footers… hopefully we’ll send in an update or two.
Fair winds and following seas to everyone sailing to Hawaii this week,
Aloha,
Ronnie Simpson
(Title inspiration thanks to Cypress Hill – ed.)

sailing with a broken wing