No, not just America, the World….! 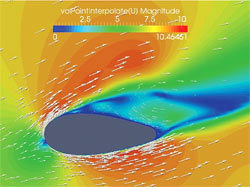 Listening around, the word airfoil comes up from time to time. We hear of airfoil-shaped stanchions. And did someone say recently, airfoil-shaped spinnaker poles… Seriously?
Airfoil components on yachts are nice and may give everyone the feeling that no stone is left unturned, but where you gain the most difference with an airfoil shape is in the rigging, which has real numbers to back it up. The word ‘airfoil’ in Hall Airfoil SCR solid carbon rigging is anything but a buzzword. It represents a quantifiable performance increase.
A year after Hall introduced SCR solid carbon round rigging in 2008 we introduced our Airfoil product. Streamlined rigging significantly reduces drag over round-shaped rigging, a fact known for a long time. Aircraft started using it in the late 1920s and modern sport bi-planes still use it. Tests over the years even showed that some of these aircraft couldn’t take off with round rigging. And 12 Metres have used streamlined rigging since they began racing for the America’s Cup in 1958.
Main picture: No doubt about the drag gains of airfoil rigging over rod. The spike around 1600 AWA (only seen these days when storm-bound) is the rod stalling as the sharp trailing edge now becomes the leading edge; these graphics are from the Auckland Twisted Flow Tunnel and the flow (bottom) is from the University of Michigan. Hall’s clean spreader system (top), seen on the Baltic 108 Win-Win and the tiny SCR rod profile (below)
We knew that Airfoil SCR would bring big reductions in drag. After all, we asked ourselves, how fast could a racing yacht be with a round keel fin? Or an aeroplane with round wings, not to mention even getting off the ground? Read on.