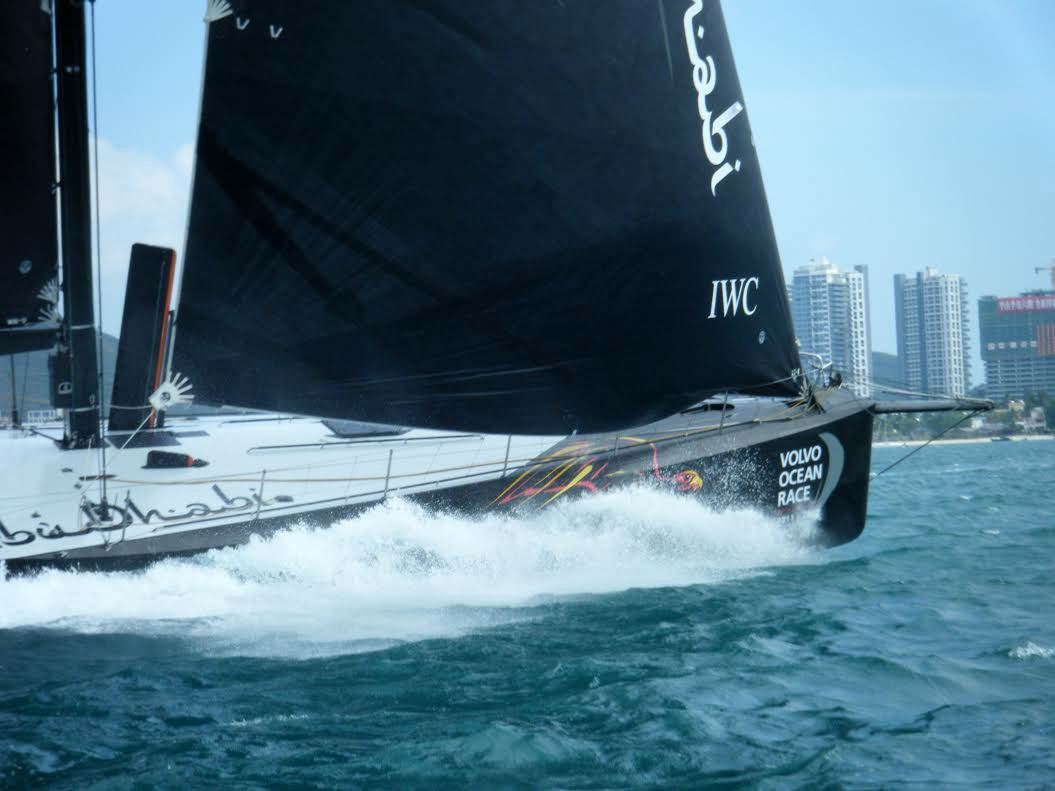 First thing to say about the article about this latest incident between RIB and sailing boat along with the CNN incident, or even the Ben Ainslie incident at the Finn Gold Cup a few years back is they may all fall into the same category but the Spindrift incident is different altogether. Spindrift was a spectator boat – a large one – too that was sailing about, at speed, in the spectator fleet and hit a RIB.

The others were official boats or photographer’s RIB trying to get in to get a good shot, presumably to sell or to satisfy a paying customer.

Secondly I would state I do not intend to judge this particular incident as it is not the only on ethat has happened and it certainly won’t be the last. Yes we need to publicise our sport BUT, and it is a huge but, RIBs should keep out of the way and their drivers need to be constantly aware, they do our sport no favours if they spoil things by getting in the way of competitors.

What do you think would be said if Usain Bolt tripped over a photographer who had knelt down on the inside of the bend on the 200m track for that ‘interesting’ photo opportunity’? And it is not just foiling boats and RIBs on the same piece of water that can cause difficulties and even danger.

I have driven RIBs in close quarters with sailing boats for many years, both as umpire and photo-RIB driver and you head needs to be on a swivel and you need to have practiced just what that individual RIB is capable of. Can you punch your way out of trouble? Can full throttle/full lock spin you out of the way? Can you slam it is reverse without swamping her? I was taught to always have your escape route planned and in this latest incident the RIB appears to be pointed TOWARDS trouble, NOT away from it. (sorry, I said I wouldn’t judge).

The above photo was one of the race occasions where I was able to “park” the RIB for 10-15 seconds as Abu Dhabi blasted past well to windward.

Just because people have a piece of paper that allows them to drive a powerboat the assumption is that they are good enough to “mix it” up close and personal with high speed sailing boats (or large fleets of slower boats) whose ENTIRE focus should be allowed to be the job at hand – ie. racing their sailing boat not watching out for spectator craft – armed with a fancy camera or otherwise that have got too close.

In the mad dash for coverage, the media wants to get in closer and closer, the amateur sailing media – in other words the mainstream media with their tiddly lenses – want to be almost alongside. Take out a pro’ and he has a lens on his camera like a bazooka and uses the camera NOT the RIB to get in close.

Add to this is that the marine photographer IS (or should be) aware and often acts like a spotter (most I have driven for do) because in a high octane situation a boat can ‘sneak up’ on a RIB. This is not, or should not be, a problem with umpire boats as there are generally two heads on swivels but as the Artemis incident showed errors in judgement can happen – no system is perfect.

On a media RIB or an umpire RIB you are closer to other fast moving water borne ‘things’ than any powerboat course trains you to be OR prepares you for. I have seen people jumping on a strange RIB for the first time and headed out laden down with 3 or 4 photographers – which often in itself affects the handling of the boat. The drivers are often volunteers for a once in a lifetime event and even I got my first ‘drive’ when I took over the helm from a driver who obviously knew nothing about sailing boats’ behaviour.

In short a good media RIB driver is a rare animal. They need to be a sailor – aware of what the sailing boat is likely to do (or can do unexpectedly); they need to be a relatively keen photographer themselves to put the photographer in the right place at the right time for the right shot and most importantly they need to be able to drive their RIB automatically to not only get into that right position but instantly move when that right position become the wrong one. Finally they have to be extremely spatially aware to forward guess the track of boats around them and to constantly have their own ‘escape route’ plotted in their mind.

If you have done it right you come ashore about as knackered as the sailors at the end of the day.

I have only got into a “situation” once when hanging low of a leeward mark for some close shots of big boats tramping towards us in the high teens. The second boat in the line decided to come low – we were right on his track – I went to bug out and but marshals had allowed spectator boats to come in too close and I had a 35-40 motor cruiser right where I now wanted to be. Thankfully the skipper of the sailboat (one of the best) spotted our dilemma and went just a touch higher and passed us at about 2-3m with a big grin on his face.  Thankfully it was just the practice race!

It is NOT the easy job that many people seem to think it is. So who should control? Before someone really gets hurt! (I am not discounting the Spindrift amputation but as I said earlier it was not a race course incident)

The organisers certainly have a duty to ensure that people allowed on their race course know what they are doing.

Qualifications? Well a piece of paper would be a start but having experienced people with masters tickets earned in a few weekends thinking they are the next Joshua Slocum and International Judges who have passed the exam yet hardly been on a race boat in their life I think a comprehensive resume or CV is even more relevant.

Without sounding too melodramatic, when is the next photo of a collision going to report a death rather than embarrassment. We need to publicise our sport but more importantly we need to keep it safe. – Shanghai Sailor.

(Title inspiration thanks to the Beastie Boys – ed)