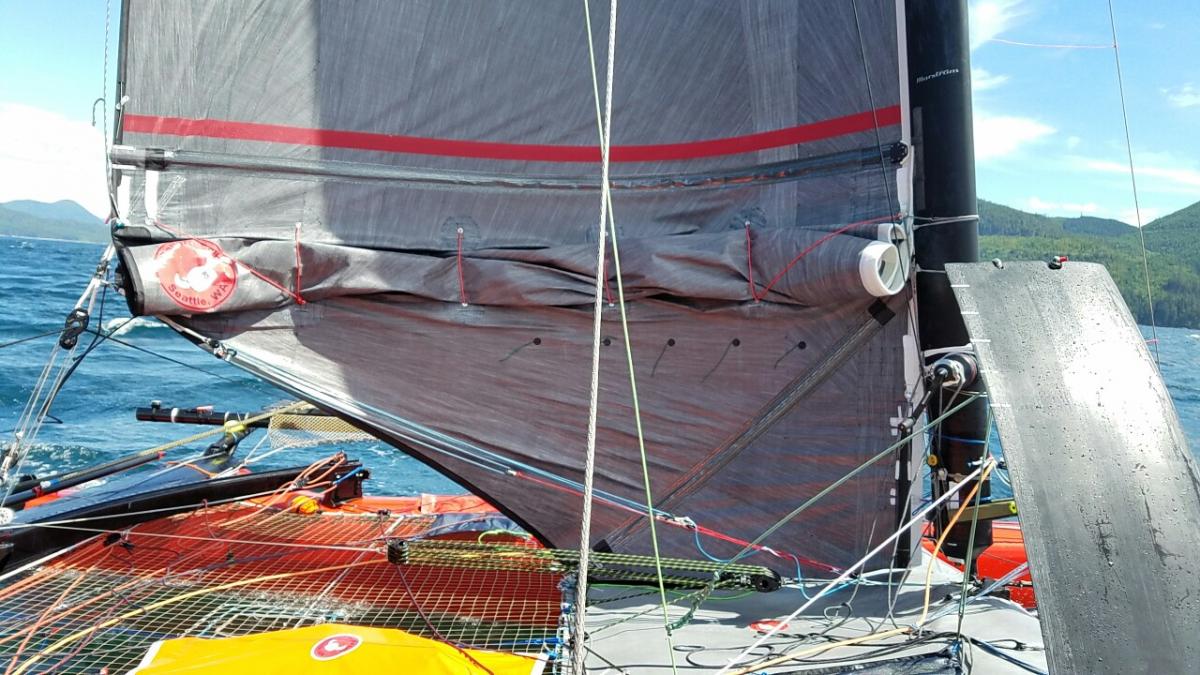 Randy Miller and the small crew of the M32 Mad Dog Racing have won the second edition outright with a blistering time of 3D20h13m, destroying the R2AK record and the rest of the fleet by DAYS!  A huge congrats to the boys, and the above pic (posted by Randy himself in the forums) shows just how much thought Miller put into the race.  It’s a Ballard Sails decksweeping mainsail that keeps its aero-friendly endplate effect even when reefed.

The race continues, and here’s a short excerpt from the latest report from the clever Jake Beattie:

While the R2AK nation slept sound in the knowledge that they would rise in plenty of time to check the tracker and box out a spot in the online queue for the coveted feed of the Ketchikan harbor cam, Team MAD Dog Racing was hurtling through the night on a downwind screamer. 23 knots downwind through the great wide open of Dixon Entrance. Full throttle in the darkest night that the crew had ever seen. No stars, no moon, no lights from an uninhabited shoreline, just black stallion racing into the spray filled darkness.

“We couldn’t tell where the horizon started, it was too dark to know where the boat and the water were.” By the time we all woke up and checked the tracker, then checked it again, they were close. Oh my god close. All over Ketchikan you could hear forks hit plates in a mid bite mind blow that had people breaking into a dead sprint, breakfast left half eaten and steaming on the table so they could get to the finish line on time. You know that sweaty nervous panic you get when you oversleep for a job interview? Same thing happened all over town as folks threw on clothes and danced the dance of people trying to put on pants and move at the same time. One driver clocked the M32 along the waterfront road south of town, his car barely keeping pace in an impromptu race within a race that only he knew he was losing. How are they that fast? Team MAD Dog Racing was within sight of the finish line and they were still sending it, fast. Even the press was surprised, some slipping in to the back of the crowd in the hopes that their competitors wouldn’t notice.

Read on, and click here for the daily video highlights.

you get nothing. good day, sir.