writers on the storm 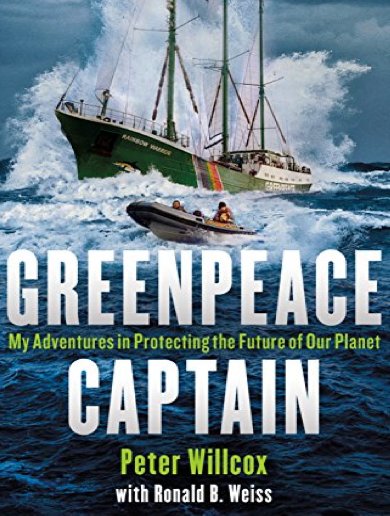 Best known for the excellent and effective Clean Regattas Program, Our longtime friends and partners-in-crime over at Sailors For The Sea keep a good eye on green-ness of the oceans, and just the other day, SFTS’s Hillary Kotoun sent us over an excellent little book review about a sailor’s life in service of not just the sea, but of all of us.  And this bad motherf^&*er sat in a Russian jail for his crime of standing up against the rape of the sea.
Captain Peter Willcox has sailed over 400,000 miles – admirable for any mariner, but his story has even more crazy stories, because he’s logged all of those miles while standing up for the environment – and the humans and animals that depend on a healthy planet.
If your looking for a good summer read, check out his memoir Greenpeace Captain: My Adventures in Protecting the Future of Our Planet. It’s a beautiful, funny, and sometimes-controversial story that show a sailor’s life determined to protect our planet. Whether he is fighting against nuclear power, protecting whales or sitting in a Russian jail – Captain Willcox outlook on life reminds us of the inner pirate all sailors have in their heart! Here are our top quotes from the book:
1. He’s a former America’s Cup sailor
“I continued yacht racing whenever I could, and in 1979 I took some time off from the Clearwater to do a stint with Dennis Conner’s America’s Cup team (the team won the cup in 1980.)”
2. The ties of sailing & environment run deep in his family
“I’m a walking, talking argument for nurture in the nature-versus-nurture debate. I was adopted at the age of thee months by a left-wing, antinuclear, antiwar, socially progressive hardcore-offshore sailing family.”
3. He survived a French sabotage (sadly the boat and 1 crew member did not)
“The inquiry also found that a total of at least thirteen French agents had been involved. Operation Satanique (no translation necessary) was a large and complicated mission. The explosives had been smuggled into New Zealand in a moderate-size sailing yacht. Another French agent had infiltrated the Green Peace office in New Zealand as a volunteer. She had kept the DGSE informed about our timing and plans. She had even used our phones to arrange for the boat and scuba gear used in the attack.”
4. His definition of heaven
“My favorite sound in the world is hearing an engine stop and then hearing the bow wave burble while under sail. Someone once said that the definition of heaven is taking your favorite moment and being able to live in it forever. I’m not saying there is a heaven, and I’m not saying that if there is a heaven I would even be allowed in, but if there is and if I am, that’s the moment I want to be in forever.”
5. He’s got a sense of humor
“Last, I would like to sincerely thank Russian president Vladimir Putin. Without your “two-month, all-expenses-paid vacation in Russia,” this book never would have happened.”
6. He’s not afraid of a little contact
When in the water, wearing a survival suit, trying to stop a Destroyer…. “On the next attempt I let the bow come by so close I could touch it. The bow wave slapped me in the head as she went by, my hand dragging along the gray steel hull of the ship. Once the bow wave passed, it was so quiet I could hear one of the sailors high above me shout: Watch out for the propellers!”
7. Even eco-warrior sailors like to party
“I’ve been in many police stations in many different parts of the world, but when I stepped into the police station at Sète I was completely unprepared for what I saw. There was shouting. Squealing. Stack of pizza boxes. Wine bottles everywhere. Cops and activists taking pictures with each another. In short, I stepped into one hell of a party!”
8. But overall, he really, really loves the ocean
“But I knew it wouldn’t be very long before the sea-less than a mile from our fireplace-would call me back. There’s a long-standing maritime tradition to come to the aid of anyone at sea who is in peril. So when the ocean itself is in trouble, I can’t refuse the call.”
9. And he needs fellow sailors to take action
“Another expression is “We’re all in the same boat.” That’s us. That’s Earth. Everyone’s in the same ecological boat, and we’re sinking our own planet-boat by drilling holes in while ignoring the fact that it’s causing the water to rise faster and faster.”

are we not men?