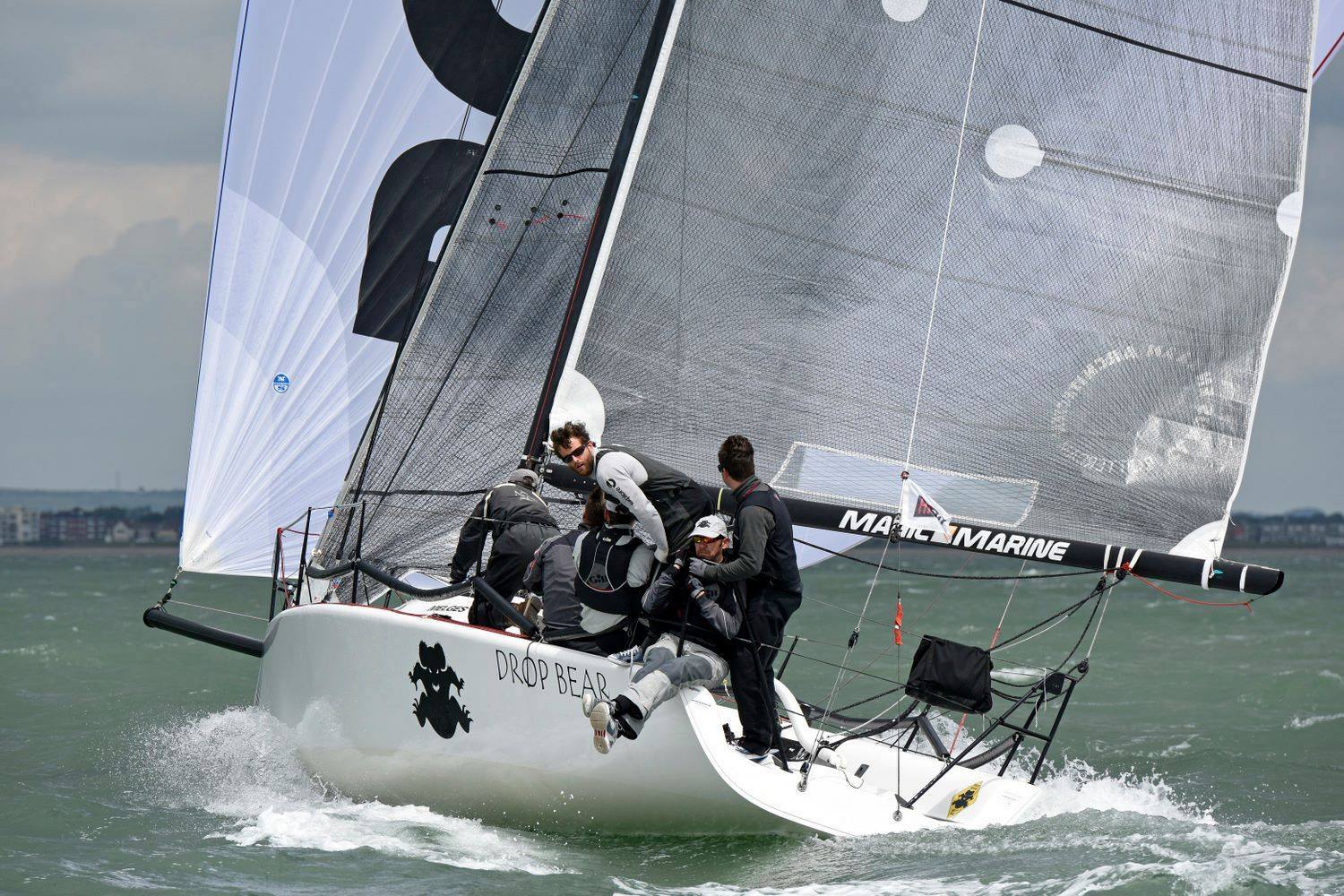 Local Knowledge
The Melges32 Drop Bear raced in the RORC IRC Nationals this past weekend in the newly created HP30 Class. This was the second event for our (new to us) Melges32, the first being a bit of a disaster. The fleet included two Farr280’s (FOMO, Pandemonium) a Farr30 (Pegasus) and a Fareast28 (Shanghai Lil)
Conditions on the Friday were great with a light breeze in the morning building later in the afternoon. The RORC Race Committee did a great job and got 4 windward / leeward races on. Drop Bear had an almost perfect day with bullets in the first 3 races and getting a second in the last race to Lloyd Thornburg’s Farr280 FOMO due to a massive kite blowout. So we were happy with a very solid start to the regatta.
Saturday’s weather was a different story. With some of the heaviest rain we have sailed in the Solent and massive wind shifts, getting a race on and having the motivation to stay out there was a challenge. The plan for the day was 1 W/L and 2 “round the cans”. In the first race Drop Bear was ahead when the race was abandoned due to a large wind shift. Torrential rain followed as did more shifts. The RC managed to get a second race on in the “round the cans” format. The Farr30
Pegasus proved tough to beat with only a short spinnaker leg not enabling the lighter boats rated with larger spinnakers to pull away. With racing abandoned shortly after finishing race two, Malcolm Wootton on Pegasus also won the Tiny Mitchell Trophy for the HP30 Class.
Sunday we all hoped for nicer conditions and with an earlier start, 3 good races. Overnight Drop Bear was first, Pegasus was second and FOMO was in third with each boat still able to win the series. The plan was for two W/L races and another “round the cans” race. Race one proved to be the best race for Drop bear winning by around 3 minutes on corrected with FOMO second. Race two saw a similar result with Pegasus swapping into second. Race3 being “round the cans” again saw the advantage to Pegasus with Drop Bear second.
The Final results saw Drop Bear first, Pegasus second and FOMO third.
Overall the weekend was great fun. Congratulations to all the HP30 competitors (and the other classes) we hope the fleet builds from strength to strength.
The Melges32 is a great boat to sail. The HP30 rules restrict the longer boats to only 6 crew at present so the Melges32 (and Farr30) with 6 is very challenging and there is still a lot more to do to work out how to get the most out of the boat.
Quantum Sails Hamble did a great job re-cutting the 4 year old sails that came with the boat (and reducing size) to make us a little less overpowered and we still seemed to hit our targets.
Anyone looking to get into this class shouldn’t delay. Get in now and help shape the class! It’s great fun and with similar boats it’s really competitive even in IRC.
We obviously think the Melges32 provides the best “bang for the buck” in this class as it’s great fun and entry costs are about a third of new 28-30 footer. But there are plenty of other options and with similar boats it should come down to crew work with each boat having their strengths. On the Melges32 we had only one Cat3 sailor on the boat and Pegasus had none so running costs and being able to compete does not need to be astronomical either.
Next up for the class is the Round the Island Race and then The HP30 and UK Sports Boat Nationals in Plymouth 15-17 July. More details can be found on the HP30 Class Website hp30class.com and our Facebook page @DropBearSailing.
Cheers,
John