to infiniti and beyond! 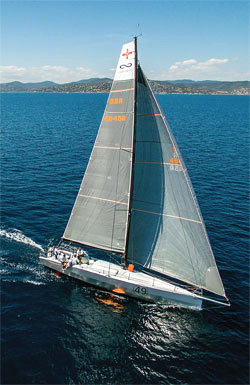 With the sailing world seemingly going foil crazy, stock prices are rising for Dynamic Stability Systems and Infiniti Yachts, chief exponents of the patented DSS foil system. Deploying a lateral foil to leeward that generates lift and piles on righting moment when it is needed, as a single entity DSS represents one of the biggest performance enhancements you can make to a modern yacht. The point is finally coming home, having recently passed from fringe eccentricity to head-slapping ‘why didn’t we think of that years ago?’
The first Infiniti 46R is now sailing in the Med with a full offshore programme ahead of it taking in all of the classic races. The first boat was built in Turkey but production boats will be supplied by McConaghy. With most of the big offshore races bar the Newport-Bermuda (ORR) now run under IRC James Dadd and his rule managers will be watching closely…
Following on from the DSS-equipped Infiniti 36 fast daysailer, the first Infiniti 46R has just completed sea trials in the south of France. The Infiniti 46R has been developed as an offshore/coastal race yacht for the classic 600-miler races such as the Sydney Hobart, Fastnet Race, Middle Sea Race and the Newport-Bermuda. Hull no1, Maverick, will debut shortly at the 2016 Giraglia.
Designed by DSS creator Hugh Welbourn and engineered by Gurit, it is also built using Gurit carbon pre-preg with an M-Foam core. Read on.