Unlike one of our decidedly lesser competitors, we don’t engage in phony glad-handing or gratuitously blow smoke up people’s asses. So when we saw the press releases for Long Beach Race Week, we didn’t think cutting and pasting was worthwhile. Leave to our long-time friend Keith Magnussen to bring you the real dope… 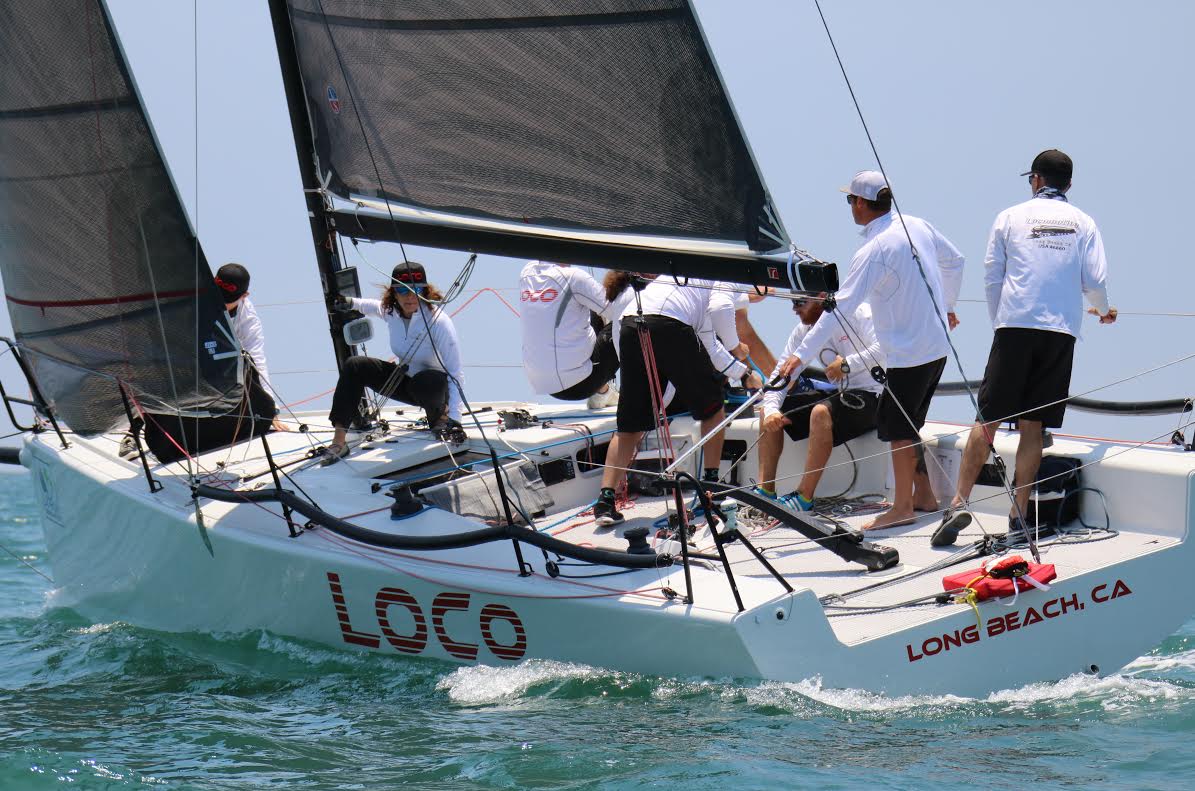 I do not usually skim the forums too much these days but a Long Beach Race Week thread caught my attention.  People were asking some interesting questions, and some were just being annoying.  It made me sit down and do a little re-cap of one of the best regattas on the West Coast.

First of all, to the guy saying it is nothing special and not worth a write up.. you are wrong my friend.  If we want the sport of sailing to get “healthy” again (as you so eloquently put it) then we need to write more, report more and take more responsibility in advertising it (sailing).

So Ullman Sails LBRW was, and always is a huge success for those who attended.  The J-70 fleet came out in force and packed in some of the country’s top teams into a 26 boat fleet.  If you have not raced in the J-70 fleet then do not bash the boat.  It is fun, competitive and offers some tight sailing.  Julian Fernandez’s team “Flojito y Cooperando” came away with the win.  The J-70 World Champion showed the consistency necessary to win over the seven races that comprised the regatta.

Let us give maximum respect to the Schock 35 class who are back in force with seven boat one Design Fleet!  Bob Marcus and his team “Code Blue” won by four points and was crowned the West Coast Champion.  This classic So Cal boat epitomizes the longevity and history of LBRW.

You do not like W/L racing?  Then you could have joined one of the random leg fleets.  The organizers put this fleet out there a few years ago and it has grown significantly.  I did it two years ago on the Santa Cruz 52 and had an epic time racing with my friends.  Bill Durant and his son Dustin are always fun to race with and the random leg course gave us enough time to laugh, sail, make fun of each other and do pretty well.  This year the Medicine Man ran away with it, the crew even admitted to me that it was a bit lopsided but I heard no complaints from anyone on this course, just positivity.  Gator sailed well in the B division and won it outright, showing us all that even the classic boats still have a place out there.  Nice job to them and they won PHRF Boat of the Week.  Ullman Sails donated CFJ or Optimus sails to the boat of the week’s respective Yacht Club Junior Programs.. pretty nice incentive for all racers out there, especially if you are trying to increase the healthiness of the sport.

The West Coast TP52 class showed up (1 boat) and raced in the Fast 50 fleet.  Not a lot to say about all that but I did talk to Pete Heck from Margaretville and he always has a smile on his face so I assume all was good out there.

So, the Sportboat Class that was mentioned in the forum.  I was on the C&C30 Loco and to call this a “true” sportboat class would be a bit of a stretch.  The J-80’s and Melges 20 were a bit underpowered in the light stuff (like us) and the tall rig of the Bolt 37 sort of made the fleet spread out a bit.  It had a rating in the 20’s which seemed a little weird considering its ratings off the wind.  They did win every race and sailed on their own which must have been fun.  We plugged along against the Melges 32 but the little C&C did not have enough omph in the light stuff to keep up.  Well done to the J-80’s and Melges 20 for sticking around. (and we won’t even get into the amazing gift rating of 23 handed to the Bolt 37 – ed.)

Sailing Anarchy’s love affair with the FT-10 might be over but they still come with a One Design class!  Tom Hirsch won the regatta outright but I was witness to some tight finishes and mark rounding’s that made their fleet look fun (while we tried to figure out if being two minutes behind a Melges 32 was enough to correct).

Plenty of other racing happened and here is the real recap, the results.

Facebook and forums have become a place of a lot of negativity and a spot to turn anything and everything into a political agenda.  It is kind of pathetic, in my humble opinion of course, that we cannot see the positive effects and value of such a classic and great regatta.  If you want to make this regatta better then sign up for 2017 and bring your boat.  If you do not want to join in then stay in your home office, troll someone else’s fun and STFU.