it's never not a potential sinking 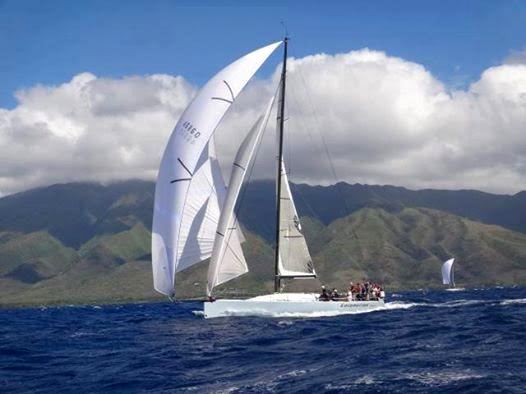 UPDATE: From Dave Millet: I was the broker mentioned in the news piece.  The crew called me by sat phone on Monday evening about 6pm and reported they had struck something very hard and it literally tore the rudder out of the deck and almost out of the boat.  They pumped, bailed and stuffed things in the hole for quite a while but with a giant swizzle stick in the bottom of the boat, 30 knots of winds and messy seas it became impossible.  I coordinated with the coast guard and the helicopter picked them up with no injuries reported.  The crew should be commended for there cool heads and teamwork to do as much as they did.  The captain of the boat – Lynn Silva –  was very competent and was a veteran of many pacific crossings and other deliveries all around the Hawaiian Islands.  She did a great job keeping her crew safe and getting everyone home in one piece.
SAN DIEGO — The Coast Guard rescued three sailors 150 miles west of Los Angeles, after Locomotion, an Andrews 45began taking on water, Monday. At 6:51 p.m., Monday, watchstanders at Coast Guard Sector Los Angeles-Long Beach received a call from the broker of the 45-foot sailing vessel Locomotion, reporting that the rudder had broken, the vessel was taking on water and the three-person crew was unable to keep up with with the flooding. The crew deployed their life raft and activated their EPIRB as a precaution.
A Coast Guard Sector San Diego MH-60 Jayhawk helicopter crew and the Coast Guard Cutter Narwhal were immediately launched to assist. Due to the distance from shore, a Coast Guard Air Station Sacramento HC-130 Hercules aircraft was also launched to provide additional radio communications and oversight of the rescue.
The Jayhawk crew arrived on scene at approximately 10:30 p.m., and safely hoisted all three sailors; a 41 year-old man, 56 year-old man and 61 year-old female. They were transported to San Diego and arrived at 11 p.m., with no medical concerns. Locomotion had recently been purchased and was en route from Hawaii to Newport Beach, California.
Click here to watch the night video rescue.