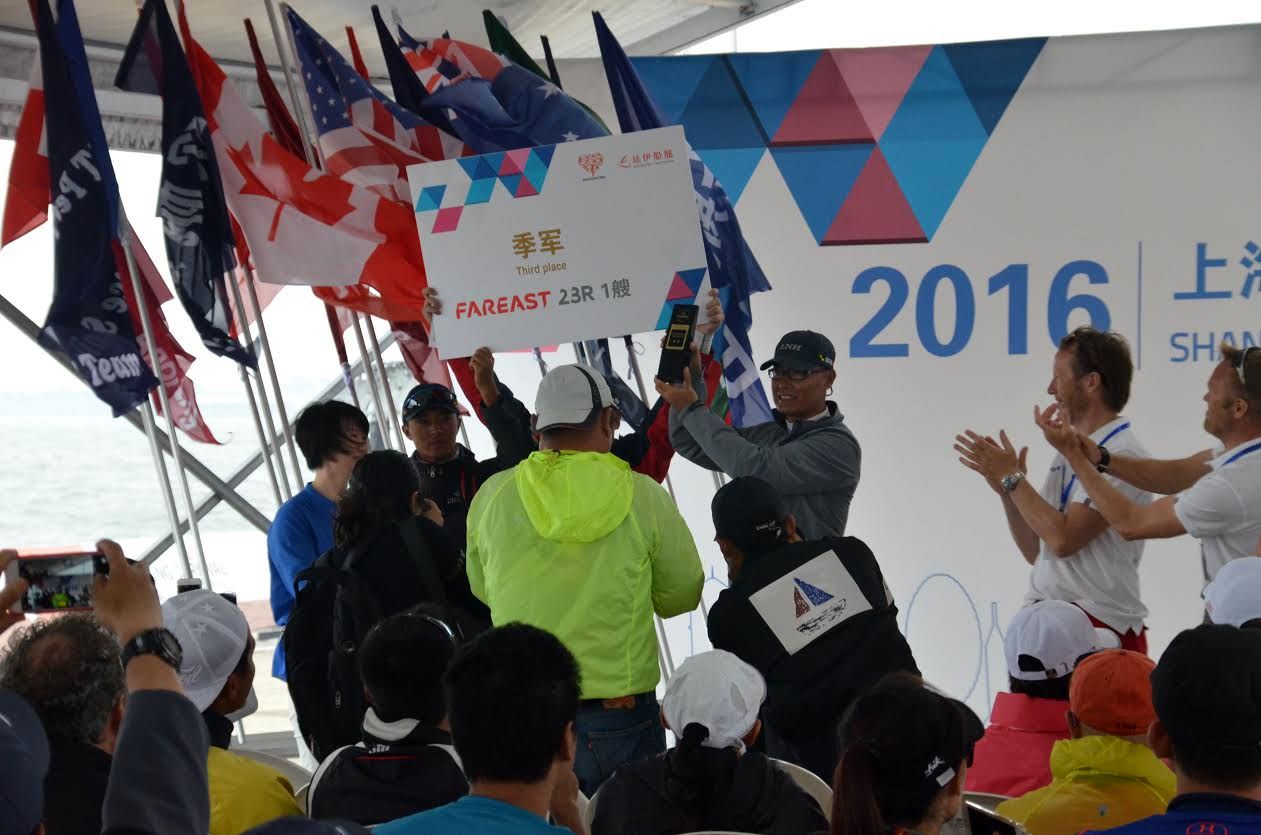 Most of you know that Team Anarchy went to China to sail in the FarEast 23R International Regatta. We really dug the event, but finished a disappointing 5th out of 28, and of that 28, most were Chinese and it has to be said that they were some of the most unnecessarily aggressive, rule breaking, screaming douchey sailors I’ve sailed against. Totally unprepared for their antics, we got screwed nicely by a number of them throughout the week,  as did, we’re sure, many of the other competitors. But whatever, that’s just the way it is.
One of the boats we were in the hunt for third place (and the prize of a FarEast 23R) going into the last day was a Chinese boat and Alistair Murray on Team Ronstan. They put together a 1-4 on the final day to our 10-3, the Chinese boat melted, and it looked like Ronstan locked up third. But it was not to be.

We hinted at the Far East Yachts International Regatta producing one of the strangest “redress” incidents we have ever seen. Well, there have been developments which just make the case even more ludicrous. To set the scene, there were some key entries in the NoR and SI’s. Firstly that the rules of the regatta would be as “defined” by the RRS 2013-2016.

Secondly that “Jury committee would be appointed and its decision is final” and thirdly that “On water jury would apply”. And as we all know, on the water judging effectively takes the ‘room’ out onto the water. With that in mind, in the final race, Boat 4 was called to do a penalty which they duly did.

All boats carried a GPS tracker and Boat 4 is clearly seen doing said penalty. When the fleet came ashore Boat 4 claimed the judges call (which according to the NoR AND SIs was final) was wrong and a redress hearing was held – a redress hearing which the NoR and SI’s clearly stated was inappropriate and outside the regatta rules. (see ‘secondly’ above)

Boat 4 was subsequently awarded average points (5.4) which elevated them above Team Ronstan (3rd) into 3rd spot overall by just 0.6 of a point. At the prizegiving we had not long finished congratulating them when the bombshell arrived about 5 minutes before the actual prizes were being given out. Results.

One of our party went to find the redress application on the official notice board as detailed in the race documents – nothing. But was the result of the hearing there – nothing, both in contravention of the race documents. Not a big deal you might think except that 3rd spot earned them – Boat 4 that is – a Far East 23R as a prize.

But it gets better. Team Ronstan, having protested, had the right to a hearing and be represented at that hearing. The communication they received back from the race officer after a long delay (perhaps hoping they would go away) stated they took the matter seriously – but obviously not seriously enough to read the RRS rule book or their own NoR – as now not only had they broken the rules regarding redress they had also broken the rules regarding the rights of a protestor to be informed of a protest hearing AND attend that hearing.

They included in their response a trace of the GPS to justify the “redress” (which in reality was impossible because of the clauses in the NoR & Sis) which showed the boat in question, boat 4, doing their turn – kind of difficult when the NoR denied that right in any case.

Sadly for the Race Officer Mr Jiang, who apparently works for Far East Yachts (and we understand the tactician of Boat 4 used to), – forgot that in the top right hand corner of the GPS video was the live positions of the boats concerned.

Boat 4 went into the penalty turn in 8th place and came out of the penalty turn in – you’ve guessed – 8th place and went on to finish 10th in the race. They were awarded (you could call it gifted perhaps), 5 places redress for an action that cost them zero places on the racetrack. That was just enough (coincidentally) to push Team Ronstan out of the money and Team Anarchy down to 5th. No big deal for ourselves, but it must stick hard in Ronstan’s throat to be pushed off the podium by such a complete disregard (or at best, ignorance) of the rules.

Did the ‘committee’ even validate the redress request? Well we will never know as, conveniently perhaps, they have lost the relevant form requesting redress but as the first action of any hearing is to make sure things are valid then to simply look back at the NoR to see that “jury decision is final” would have brought the any such hearing to a rapid conclusion.

The situation has been run past 5 or 6 rules experts including an umpire and a couple of International Judges and they all agree the action of the race committee is completely wrong and the original race AND regatta scores should be reinstated.

If you care to dig deeper the ‘redress rule’ even states that to apply for redress a boat’s score should have been made “significantly worse”. That doesn’t exactly balance with a boat doing a penalty turn while losing NO places at the time and being GIVEN a 5 point discount. THE Redress Rule actually states the boats position must have been made “significantly” worse but in this case the definition is academic.

Of course we are not suggesting that the fact the Race Officer Mr Jiang works for the organisers, Far East Yachts, and the tactician of Boat 4 used to work there also had any influence on their actions – perish the thought!

The organisers have had every opportunity to re-visit their actions, read the rule book AND their own race documents. Had they bothered to do so – and of course understood what they were reading – they would have clearly seen they were in error and amended their decision. This would also have given them, Far East Yachts AND Chinese sailing a very good image regarding (ultimately) doing things right. Instead all they have managed to do is to leave a nasty smell hanging in the air.

They have chosen to ignore the relevant rules to award redress where no redress was allowed both in terms of the regatta regulations or, and more importantly, the Racing Rules of Sailing and then award a level of redress way out of proportion to any loss which could be imagined or proved.

In fact, perhaps they need to go back to the dictionary and look up the word redress itself – “to remedy or set right”. The first bit of the RRS actually states under the heading ‘Terminology’ that “Other words and terms are used in the sense ordinarily understood in nautical or general use”. So no back door for them there either. Take some time to actually read the Racing Rules of Sailing and count up just how many of them they broke – around 10 or so by our reckoning!

It doesn’t matter so much to Team Anarchy (other than in principal)  – we weren’t in the money anyway but not right is not right and this was dead wrong!