Actually they can, but Dick Aubrecht, who is the Vice Chair of Moog, owns a Farr 11s has found a way to do it better. He bought the boat specifically as a family and friends science project. He just wanted to mess around the canting keel systems. This is the result after several years of work. As we understand it, the system is unbelievably smooth as compared to the stock system that came with the boat. Enjoy. 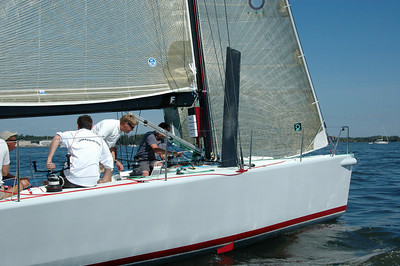 A racing yacht is an unlikely place to find one of the world’s most advanced hydraulic servo valves. Traditionally used to synchronize motion in large industrial machines in steel plants and automotive presses, the Moog Axis Control Valve (ACV) is an intelligent closed-loop motion control device that closes the control loop right in the valve and offers some of most advanced functionality for critical machinery. But this may be the first time Moog know-how has been applied to win races on the high seas.
An Innovative Advantage
Inspiration and innovation led Dr. Dick Aubrecht—Moog’s Vice President Strategy & Technology and an experienced practicing engineer and sailboat racer—to install an ACV on the “Veloce,” his 11-meter, 2,500-kilogram Farr 11S sailboat. Aubrecht has worked for Moog since 1969 and been an avid sailboat racer for at least as long. Aubrecht had always admired the 22+ meter boats that compete in the Volvo Ocean Race, among the first vessels to employ a “canting” keel. This type of ballast moves laterally to keep a sailboat’s mast and hull at the best angle relative to the water’s surface during a race.
Like the Volvo racers, the Farr 11S boats have a hydraulically actuated canting keel. The angular movement of Veloce’s keel is 45 degrees to both port and starboard. All sailboats “heel” due to the force of the wind on the sails. A traditional, or non-canting keel, remains in a fixed vertical position to resist waves and water, and maintain the boat’s stability. A captain with a traditional keel will deploy the crew at times to the windward side of the boat to add “righting moment.” With the canting keel to provide “righting moment” with much less total weight, Veloce can increase its speed by 20 to 100 percent compared to a conventional yacht of the same size.
Taking a New Tack
Aubrecht saw the advantages of the canting keel as well as the possibility to improve its operation, increase safety and enable him to focus on the race. The initial control system for Veloce’s canting keel was open-loop using a solenoid valve, which the captain controlled with on-off switches. Without feedback, it was challenging to know exactly the keel’s position. The user interface for controlling the keel consisted of two buttons, which simply switched the directional solenoid valve, and didn’t incorporate a visual indication of the actual keel position. Read on.