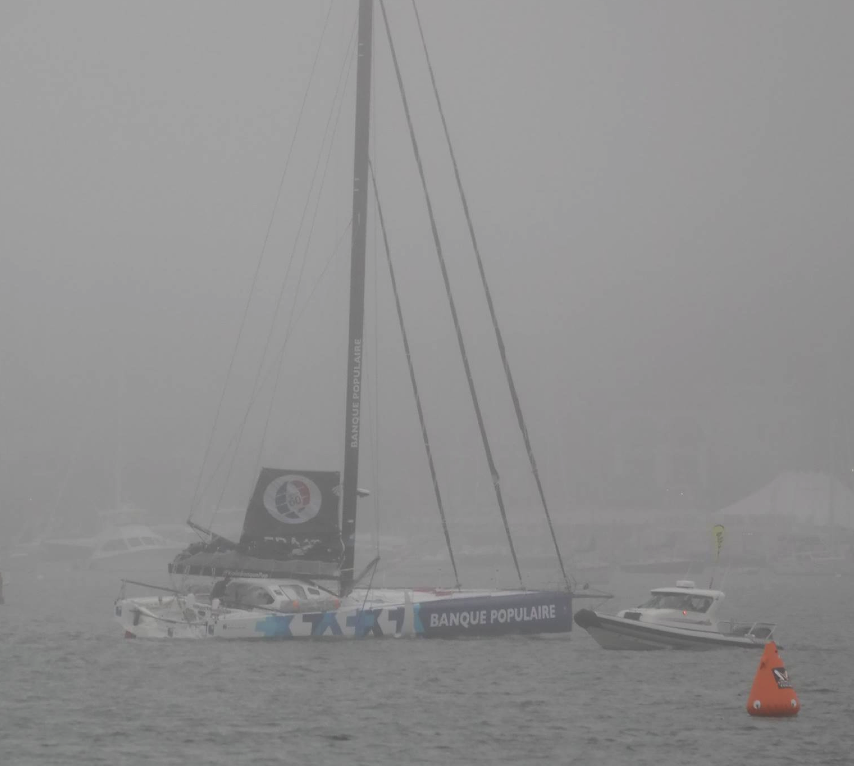 Damage to the 15-boat fleet killed the media-friendly Newport to NY “Prologue” race for the NY-Vendee program last week, but when we were down on Friday, everyone looked ready for the long haul to Europe.
Fast forward 36 hours, and debris and UFOs have taken out a third of the fleet in just a couple hundred miles – the pic to the right is Banque Populaire headed back to shore after destroying a foil.  Just 8 of 14 starters remain on the course, and that doesn’t include at least one boat whose whale strike prevented them from even making it to the line.  That’s the attrition rate for a full RTW race, and right now the skippers and designers have to be stressing about the biggest race of their careers in just a few short months.  Is there any way to prevent the problem?  Is it more whales, quieter foils, or increased speeds that have turned the fairly reliable IMOCA into boats with an 50/50 chance of finishing even a short Atlantic crossing?  Does anyone have a solution besides slowing the hell down?
The next SA Podcast tackles this subject head on, and much much more, including the OSM push and where it’s going, the recent sacking of both the longtime Managing Director of the Vendee Globe and its Race Director Denis Horeau, and the controversy over media crew.  Look for it this week.
Track the race here, and discuss the craziness here.