rollin' with the new

Not many people put together consistent winning programs together like Peter Morton, and here he gives us a little peek into what is surely the most dynamic new fleet. Yep, he won. 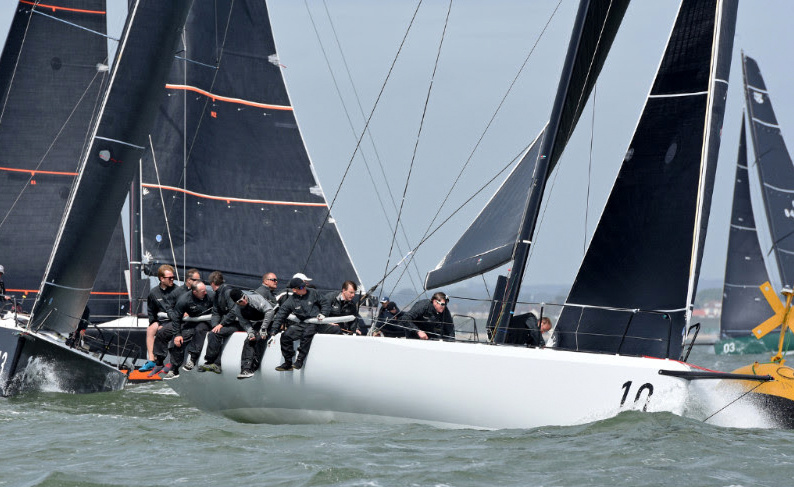 The Fast 40 class literally burst onto the scene in the Solent this year, following on from the idea that Rob Greenhalgh had to try and get similar boats racing as a fleet. Rob initially thought there would be 5 or 6 boats but it looks like the fleet will expand to 12 or 13 in the next month or so.
The fleet is made up of one new Kerr 40 +s (with two more arriving in the next couple of weeks), 2 Carkeek 40 Mk2s including mine, 4 GP42’s (two Botin and Carkeek, one Farr ex Near Miss and a Reichel Pugh), a HH 42 and a couple of the original Kerr 40’s, one of which has been turbocharged. Also in the fleet is Otra Vez the Ker 43.
The racing has been very close so far with the GP42’s and the newer Fast 40 designs being very similar in speed and performance profile. It’s been pretty difficult to see any difference in boat speed amongst most of the boats that are at the upper level of the rating band (1.27 IRC) Otra Vez is a bit of a different animal and has a significant edge upwind in so much as she has the ability to go high or fast and is certainly difficult to pass once she gets into the lead. She is nearly 2 tons heavier and much bigger, and probably would have won the Vice Admiral’s Cup pretty easily had she not had two OCS’s on the last day. Bill Coates tells me there is not much tide in Texas and we had 1.1 knots of tide taking us over the line at the start!
It is really good to see this new class developing in the UK and the move away from IRC lead mines will certainly bring some excitement back into the racing here. Rob Greenhalgh together with Stuart Childerley, the fleet PRO and Andrew Yates the Class Measurer have done a really good job in managing the Class and there is certainly plenty of smiles on the Owners faces.
Last week, the VAC was the first of the 5 series to make up the championship for this year, with the Nationals later in September counting double points there is still plenty to play for.
Best,
Morty

photo of the year?