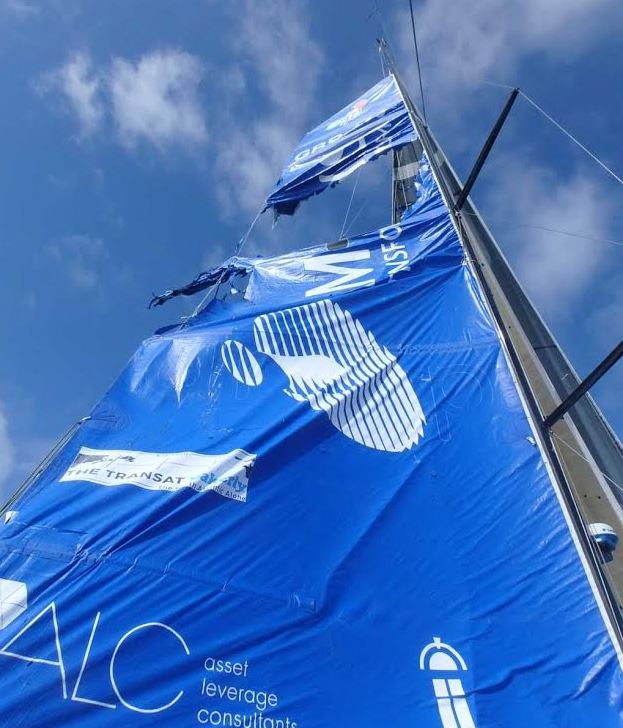 Phil Sharp is racing an unbelievable story in The Transat bakerly. Not only has he suffered zero power for 60% of the race, forcing him to sail blind, race with no comms, and eat dry dehydrated food with a faulty desalinator, he’s also had various sails shred, the worst being the main. As Phil was trying to reef in 30+knots a tear formed at the leach ripping away from the sail. He was about to get back into 1st place again before this happened. After spending hours trying to make a repair, there simply were not the resources on board to make the fix, having made several other repair jobs on ripped sails. Phil has managed to climb the mast and tie the sail up, allowing him to get what pressure, if any, out of the lower part of the sail.
“Here she is right now – next to useless! I climbed the mast to lash it at the 2nd spreaders so i could try and use the lower section a bit. Every little helps! The top half is stuck, so that’s just added decoration…It’s been a fast night at over 10 knots with the spinnaker! So nice to have a half decent sail up for a change, seems really fast after spending a week going upwind! Carac has been flying in from the south… was hoping their might be a fight on but with a 70nm lead, doesn’t look likely… also not a lot of weapons in your cabinet if your flying several large shredded bags from your mast in place of a useful sail…”
Currently fixed for 3rd place, Phil is due to arrive on Saturday.

resourceful or crazy? how about both?