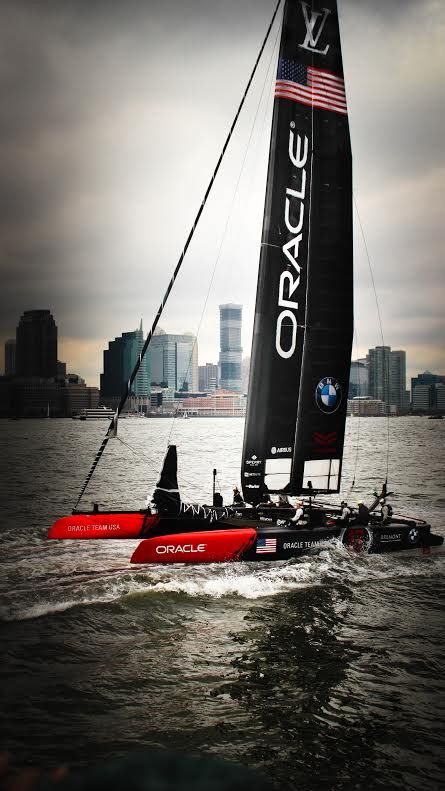 I emerged from the subway and breathed in the crisp fresh air coming in from the Southeast. I looked up and saw the Freedom Tower disappear into the thick overcast roof above. As I walked along Fulton Street I veered to the side to avoid a puddle that was leftover from nearly two weeks of rain.

The weather forecast called for more rain but against all odds, Mother Nature stayed her hand so we could all stay dry as we ushered in the return of the America’s Cup after nearly a century of silence. The last time the race was hosted in New York Harbor was in 1920 and back then, without even the advent of spinnakers, the fastest boats topped out at just about 15 knots.

I wonder what those sailors would say if they could see the AC45’S suspended in mid air barreling down the Hudson at 40+ knots!

I was admittedly one of the ones who initially opposed the adoption of foiling multi-hulls into the America’s Cup. “It’s too outlandish!” I complained. “It just doesn’t do justice to the spirit of the race.”

I remember making these very remarks to my father while we watched the race a few years ago. I expected to receive a hearty agreement from him but to my surprise he rebuked me and said, “I think it actually keeps the spirit of the race.” “What do you mean?” I asked in befuddlement. “Well,” he began, “the America’s Cup was always the race where sailmakers and boat designers debuted the latest and greatest technology. Nothing but the fastest rigs of the day duking it out for the most prestigious prize in sailing. So, I think they would actually be doing a disservice to the legacy of the race to ignore the fastest rigs that we have today just because most people sail monohulls.” Hashtag mind blown. Thanks Dad.

As I approached the Esplanade I could hear the hustle and bustle coming from the mass of people coalescing at the Brookfield Place Plaza, the site of the America’s Cup Race Village, right next to the North Cove Marina. It was exciting to see such a high profile sailing event being hosted at a marina where my family and I have stayed numerous times on our Beneteau 42.3, the Sea Rose. I made my way into the plaza and was astounded at the turnout!

I walked a full mile down the Esplanade and not once was I able to easily take a picture. Tens of thousands of people pressed up against the rail, stood on top of benches, and even climbed trees to get a better view of the AC45’s flying down the Hudson. I had to stand on my tippy toes and reach my camera above my head to get any decent shots!

I overheard dozens of conversations of people explaining sailing to their friends. I saw Snap stories being updated and Instagram filters being applied. I saw Facebook news feeds being barraged with pictures and Twitters with hashtags. Sailing had the social mediaverse blowin’ up! “This is what we need!” I thought to myself. Sailing needs to be real again, accessible to the average person at least once in a while.

In a playful nod to Donald Trump’s campaign slogan, the phrase, “Let’s make sailing cool again!” has been buzzing around the younger generations of sailors. Of course however, it’s not at all that sailing isn’t cool anymore, is it?

The crowd of wide-eyed spectators pressed against the rail of the Esplanade earlier today was testimony to that. With the advent of foiling multi-hulls and other advances in technology, sailing is cooler than ever! But somehow the sailing community has reached this unfortunate place where the mainstream audience sees it as this elitist, arms-crossed kind of thing. Undoubtedly sailing will always be less accessible to the mainstream because of geographic and financial barriers, but that doesn’t mean its image has to suffer because of it.

So what can we do? How can the sailing community attract more interest from the rest of the world? Well I think the America’s Cup has taken major strides! By creating a running circuit that travels around the world to major cities, people are getting to experience first hand how cool our sport is.

The exposure on social media is invaluable. It’s helping to bridge the gap between the sailing and the people. The raw experience of the events is being documented and shared in a way that people can relate to and can get excited about. Everything from the expressions of shock as the AC45’s fly past the Esplanade mere feet from the rail, to the DJ’s blasting music, to the Toast Vodka tent, to the various conversations explaining racing works in sailing, it was being posted and shared and liked.

So I think we can officially say that sailing is indeed cool enough for New York! After the incredible turnout this weekend, I’m hoping that more big events will come to New York Harbor and to other places that are hungry for more sailing. We’re on the upswing. Sailing is making a big splash in the mainstream media. Let’s keep sailing hard, snapping pictures, and having fun. – Anarchist Francis.
Title inspiration thanks to Fear.

look who woke up

drink for a cause