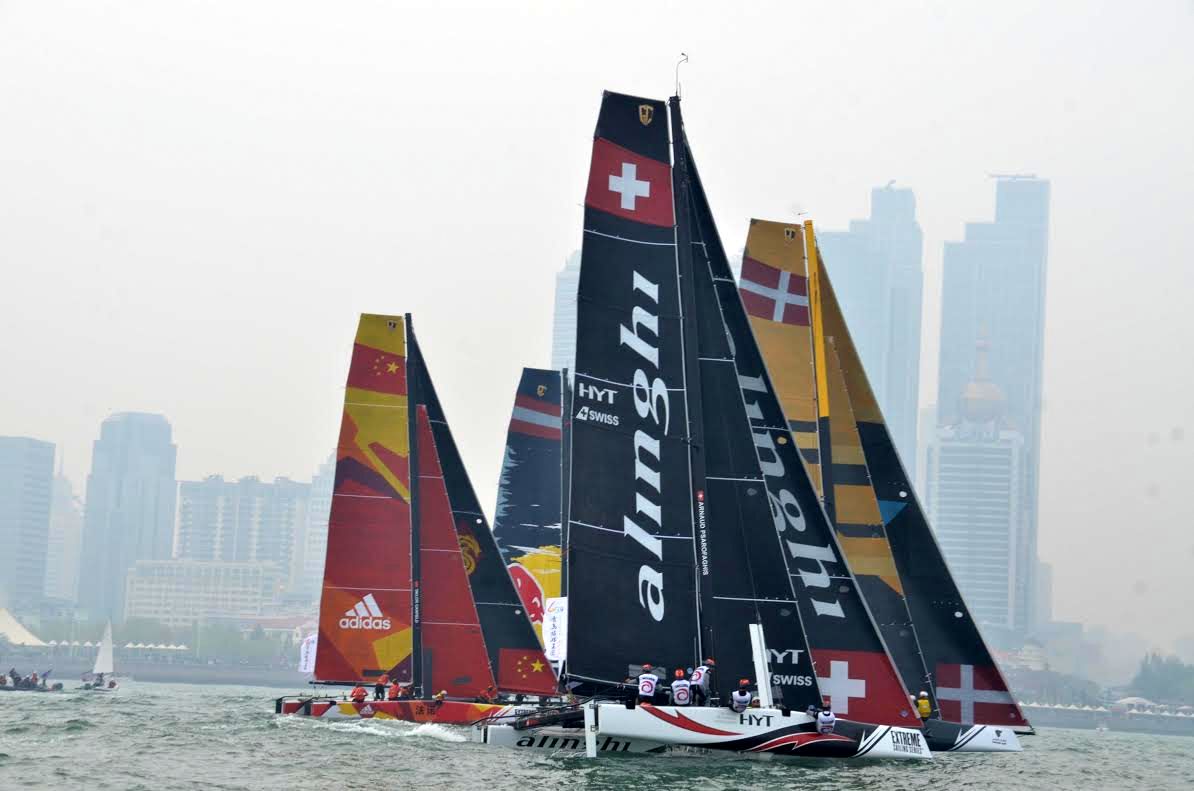 I know most of us have heard the old excuse “there is usually more wind than this at this time of year”. That was being heard round Qingdao after 3 days of the Extreme Sailing Series event as the only foiling likely to be done if nothing changed was the wrapping of the Sunday roast. Of course those with memories that stretch back a couple of years to the Red Bull / Alinghi crash already knew that there was indeed often more wind in Qingdao in May.
That didn’t stop the racing being intense, close and challenging. One of the problems with the new Extreme Series boats is the narrow chord of both the daggerboards and rudders making low speed maneuverability somewhat difficult and when you have a start line which is not over endowed with length and boats that handle like a bus at low speeds, things can get interesting.
Racing was close too, with teams seeming to take it in turns to either gain a race victory or come last and Day 3 ended with Alinghi holding the narrowest of leads from Oman Air.
Things appeared to be better as we looked out from breakfast on the final day with one local journalist getting excited by the fluttering bunting outside the hotel. I tried to explain the Bernoulli effect of air being squeezed between two buildings but it was clearly beyond them BUT on getting down to the dock there did appear to be more breeze, or was it just wishful thinking.
I am happy to be able to report that the birds did indeed fly but along with the wind came the fog and the shots are far too grey to be usable so you will just have to trust me, they did get up on their foils, all be it briefly. In fact the fog that made photography difficult eventually shut down racing for the day with viz eventually falling to 50m or so.
Ironically, once the sailing was done and dusted in came the rain, the wind and the visibility – oh how mother nature likes to tease us sometimes. This morning saw white horses with enough wind to require a reef – sod’s law indeed.
Alinghi topped the leaderboard with 187 points, Oman Air followed with 181 and the podium completed with Red Bull on 166. Should we be surprised that those teams with experience once again float to the top?
The teams seemed to enjoy it, OC Sport were happy, the jetties round the race course were lined with people and it appears Qingdao wants the show back next year so all the boxes ticked – except lots of flying.
Ah well, there’s always next year.
Shanghai Sailor

flowers by the door