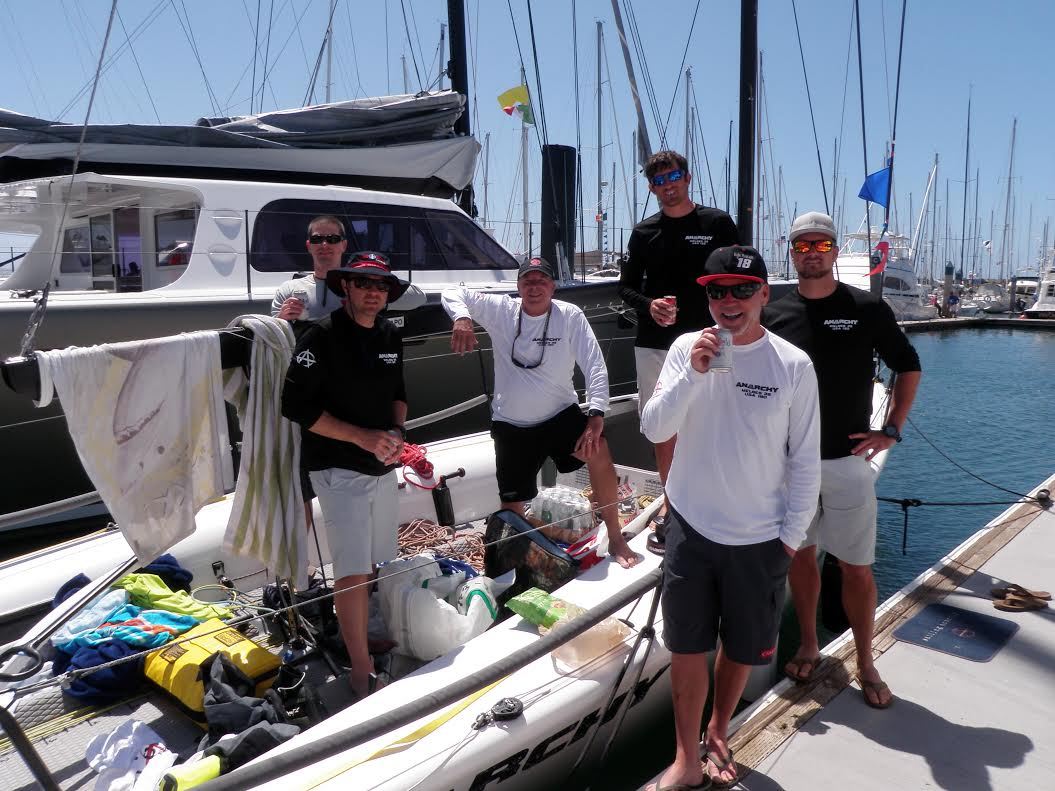 Sunday April 24, the 25 second shitbox, (Anarchy), in haste to get back to San Diego, left Ensenada before a large front was due to approach. 50 K offshore and 20 K inshore was forecast, and was was due to come in in the afternoon from the northwest. A bit incautious, but we wanted to get the boat home. The fallback was we could always run back if it got too bad. Sure we could. Melges 32 and all.
Anarchy had just taken second overall monohull in the windy iconic Newport to Ensenada, Mexico race, and inside the boat was a place you didn’t want to go. However, that’s where Paige Johnston was when Keith Lorence, on deck, spotted what looked like a Panga fishing about a mile away. Keith couldn’t tell what it was and knocked on the deck to roust Paige. Keith thought it was either a fishing Panga or a weather buoy.
Paige came up. looked out as we got closer, and declared, “it’s a sinking boat, with people hanging off it”. As we approached, we could see two wet cold men hanging off the bow of an obviously sinking power boat poking up about 6 feet out of the water. They had life jackets on and backpacks in hand, and were waving madly and blowing an air horn. Didn’t need to as we were heading straight for them. As we sailed up to them, Keith asked “how’s the water?”. Cold was the quick response!
It was obvious we needed to get them off, so we tossed a line so they could pull closer. It was lumpy, bumpy and windy, and we had a hard time keeping the 25 second shitbox from getting bashed by the future ex-powerboat. They tossed their backpacks and shoes over to us, and while Paige fended off, they jumped aboard. As we separated, they expressed their genuine thanks. They had been in the water for 45 minuets already and were wet and very cold, so we put a blanket over them and asked if they would like a cold beer. Yes, was an immediate answer, and then the story came out.
They were bringing the owners boat (he was one of the two) down to Ensenada from San Diego when they hit something, holing the bottom of the boat. The water overcame the bilge pumps and they had just enough time to call the Mexican navy, who said they would be there in 30 min or less. They also called their friends they were going to meet in Ensenada who also said they would rush up. The sinking happened about 25 miles north of Ensenada 5 miles offshore at around 4:15 PM. They were in for a long night or swim. We stuck close to the wreck so the navy. or friends could find us.
A lone passing J-30 passing 1 mile inside us spotted us circling and came for a closer look in case we might have lost someone. As they approached, they said they saw no bodies downwind, and then noticed the bow sticking 6 feet out of the water. We pointed to the two men in our cockpit and said they were all. The J-30 yelled “god bless” and took off for points North.
While talking we found that they were from Stanwood, Wa. A town about 40 miles North from where I lived. We found a lot to talk about till we spotted their friends Panga coming. We laid down fenders and directed the pick up in such a was as not to damage Anarchy, told them to toss their bags into the panga, and directed them to jump when the timing was right.
All done, we re-called the Mexican navy to inform them of the rescue, to no avail, and then to notify the fleet of returning boats of the hazard, with Lat Lon and conditions, so to prevent some returning boat from hitting it.
It was a pure stroke of luck that Keith happened to look that way and be curious, or they might still be swimming. For once, seeing Anarchy was a lifesaver.
Paige is third from the right in the post-race Anarchy crew photo. Keith was apparently getting ready to save lives! A thread has been started.

started from the bottom