save of a lifetime

Clean Report
With three breezy and extremely lumpy (outside) days of racing, 2016 Sperry Charleston Race Week will be remembered mostly for disasters averted, and the biggest was the rescue of Orlando-based J/88 crew Patrick Daniel, whose heart stopped in the middle of Sunday’s first race.  We remember when the Van Liews, Draftz, the Coast Guard, and Doctor Stephen Shapiro from Roper St. Francis hospital created the CRW Safety Plan years ago, and now they’d get to put it into action.  Spoiler alert for those who haven’t yet seen my 5-minute video interview with Doc – A pulseless, breathless Daniel was breathing and talking by the time they got to the dock to transfer him to an ambulance. 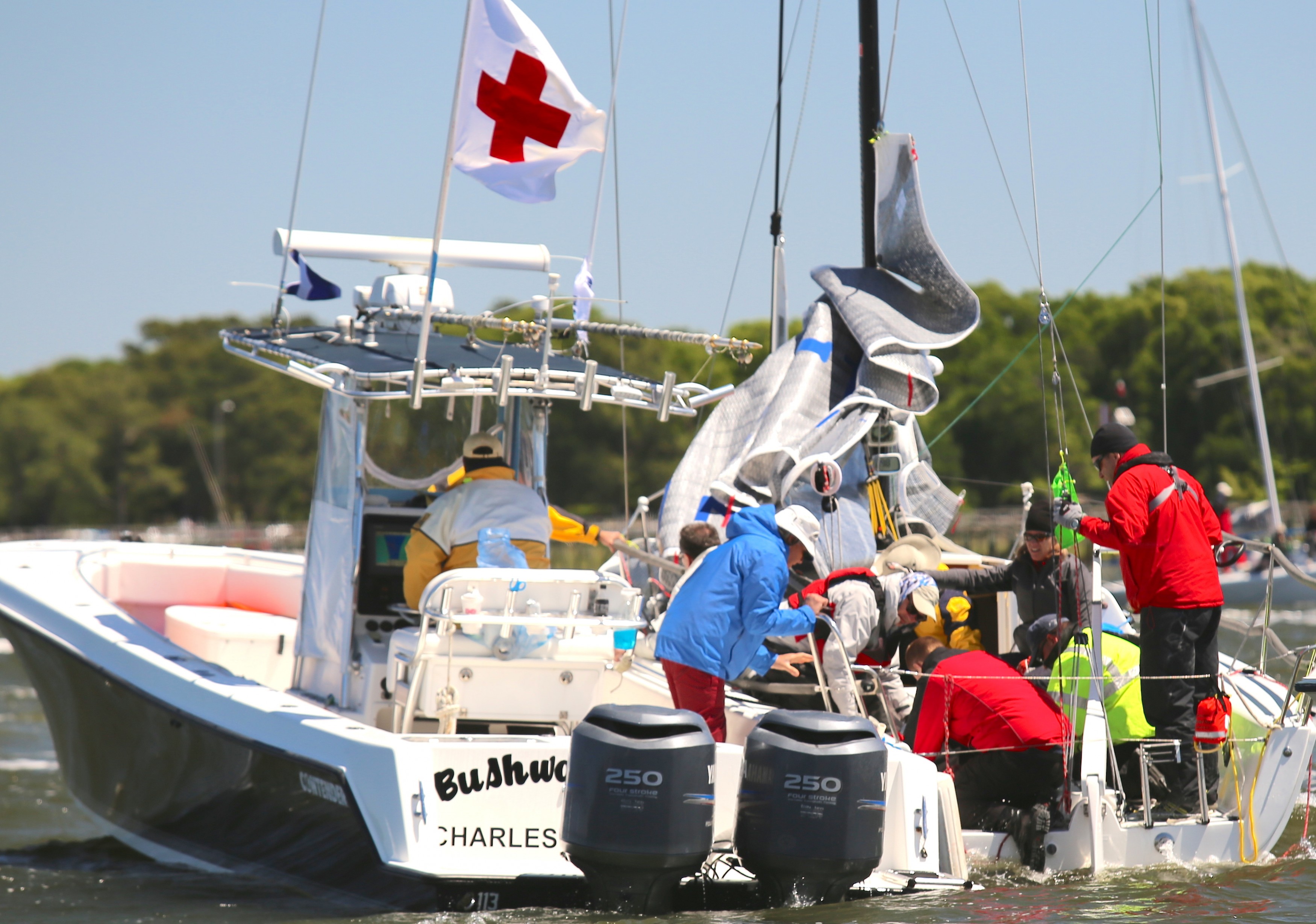 Mer and I were just a couple hundred feet away when it all went down, and we immediately motored over to stand by for assistance, but it was apparent that the first responder – and then Doc – had things well under control.  The crew had CPR already started inside the 3 minutes it took the rescue boat to get alongside, and the AED was on Daniel’s chest maybe 2 minutes later almost before the sails were completely down.
With a sharp uptick in racing fatalities over the past few years, it’s a delight to not only hear a story about a sailor escaping death, but to watch it all happen in real time.  It’s also a vindication of the hard and seemingly thankless hours that organizers spend on developing and reviewing safety plans.  Most importantly perhaps, even with a perfect performance from the crew, the EMT, the boat drivers, and the doc, there’s always something to learn – and everyone knows that had the fleet been on their intended offshore course, the outcome would likely have been much more tragic.
Draftz awarded Doc Shapiro the Jubilee Cup Perpetual for sportsmanship while the crowd gave him a massive ovation.  It was well deserved.
While it paled in comparison to the potential tragedy averted on the Wando River, the weather was pretty tragic for those looking to race sausages in 6 offshore fleets on a single course outside the Charleston jetties.  All offshore racing was shut down on Friday thanks to massive, and most of Saturday was lost offshore thanks to a nasty injury on the RC boat and no easy way to transfer to a medical boat in the big waves.  When conditions continued to rage outside on Sunday morning, CRW boss Randy Draftz dug into his bag of tricks with a long morning of calls to Port Captains and Coast Guard Commanders, and had the Wando River closed down to traffic so the fleet could move under the bridge and get some racing in.
Like pretty much all regattas in the US, handicap windward/leeward racing has been falling off pretty continuously for the better part of the last decade at Charleston, even as inshore one-designs have made it the biggest regatta on the continent.  Giving those six fleets a 3-race day in gorgeous Charleston conditions may have saved the format for another few years.  Given the millions and millions of dollars that the event generates for the area, we’d try to push the local shipping orgs for a permanent Course 4 under the bridge to allow another 50 or 75 one-designs into the harbor or even some handicap fleets if the demand is still there, but then again we care more about enjoying Charleston and sleeping past 6 AM than we do about having obstruction-free race course.
There are literally dozens of videos and hundreds of photos (including some nice work from the back-on-the-water Meredith Block) along with news from all over the place over on CRW’s Facebook Page.  And of course, there is a thread.