don't call it a comeback

Everyone remembers the basics of what happened on San Francisco Bay. Oracle Team USA was down 1-8. The Kiwis needed just more win. Then Oracle somehow beat back the odds. It’s been called the greatest comeback in the history of sport.
But was it? 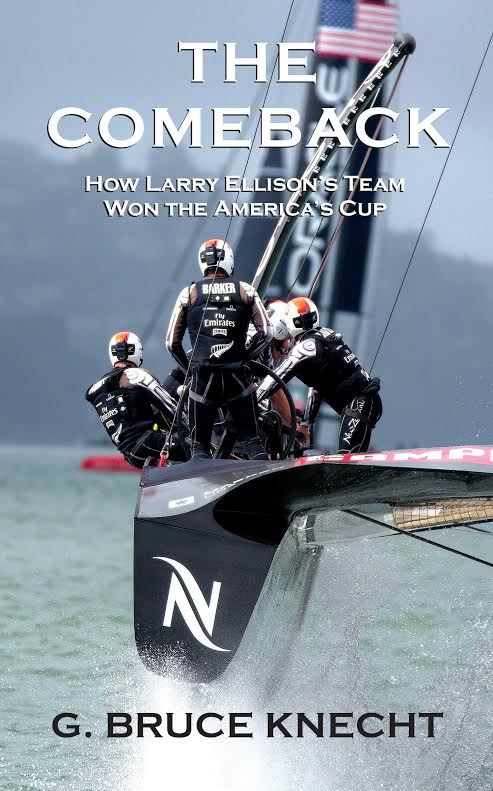 G. Bruce Knecht, a former Wall Street Journal reporter and the author of The Proving Ground: The Inside Story of the 1998 Sydney to Hobart Race, set out to investigate how Oracle turned things around and, most particularly, the source of that extra horsepower that seemed to come out from nowhere during the final races.
The book that resulted—THE COMEBACK: How Larry Ellison’s Team Won the America’s Cup–is a page-turning narrative that takes readers deep inside the story. The book’s biggest revelation: Oracle developed a technique for pumping its massive wing. It was astonishingly effective. But it violated the rules.
Pumping is not the only reason Oracle won. THE COMEBACK–which is available as a Kindle Single and in paperback, also describes the superhuman personal efforts that kicked in once the team had nothing to lose. “Oracle’s reincarnation was born,” Knecht writes, “of not just never-say-die determination and unspoken prohibitions on finger pointing and naysaying but also of an almost reckless willingness to accept risk.”
We have for two excerpts. In the first, Knecht explains what he did when he learned that Oracle had been pumping its wing throughout the final races. The second excerpt describes what’s happened since the last race.
Title thanks to LL Cool J.