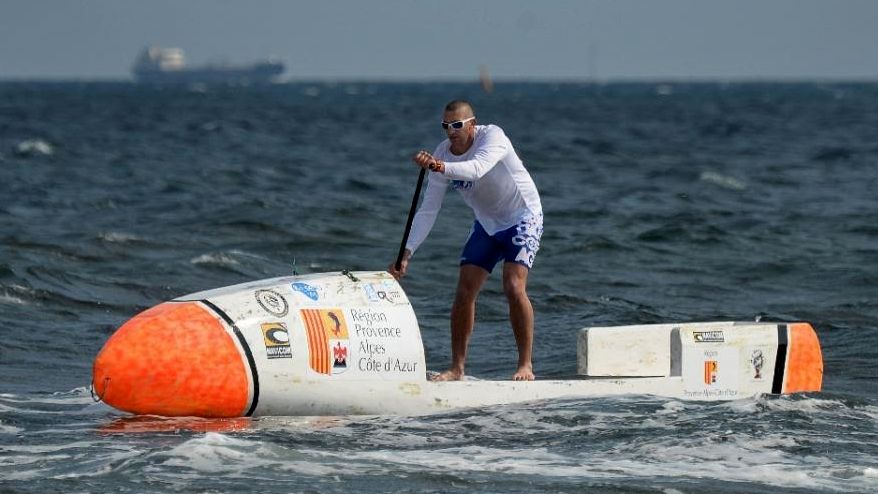 You gotta love the French. If there is someone pushing the edges of sport you know it’s going to be a frenchman, or frenchlady for that matter. A couple of months ago it was Volvo Ocean Race winner Frank Cammas foiling his Nacra 20 catamaran around Cape Horn. Before that there have been any number of extraordinary nautical feats carried out by someone French. But the latest exploit by a Frenchman just about takes the cake. This past Sunday Nicolas Jarossay set off on a 3,000-mile (5,000 kilometer) odyssey to become the first person to cross the Atlantic solo – on a stand-up paddleboard.

Jarossay is a former firefighter and by many accounts an endurance sports fanatic so a stand-up jaunt across the pond is probably right up his alley. He left from Praia, a region in the south of the island of Santiago in the Cape Verdes, and is heading for the French Caribbean island of Martinique. His paddleboard has of course been modified from the usual boards you see knocking around your local harbor. It has been extended to 23 feet long long (7 meters) and in order for Jarossay to be completely self-sufficient he has added a tiny cabin to his board. The cabin is just over six feet in length and when he is laying down there will be around 18 inches breathing space above him. He also shares the compartment with his food, most freeze dried, and all the other bits of equipment that he will need for a successful crossing. He plans to get all his power from solar panels. After a bad experience with a guide vessel that accompanied him on a previous trip he decided to do this voyage without one. Apparently he got into an argument with the crew of the guide vessel and they ditched mid-ocean and took off.
I admire anyone who has the guts to undertake such a crossing. The North Atlantic is a big place and there are plenty of rough conditions that he could encounter along the way say nothing of constant exposure to the tropical sun. Say what you like, and I am sure many people will say he is point-blank crazy, but I think we need more people like Jarossay. We need people who are not afraid to push the boundaries to show the rest of us just what’s possible if we put our mind to it. If he is successful he should hit the shores of beautiful Martinique in around two months time. – Brian Hancock.

Dollars and (no) Sense

what did he say?