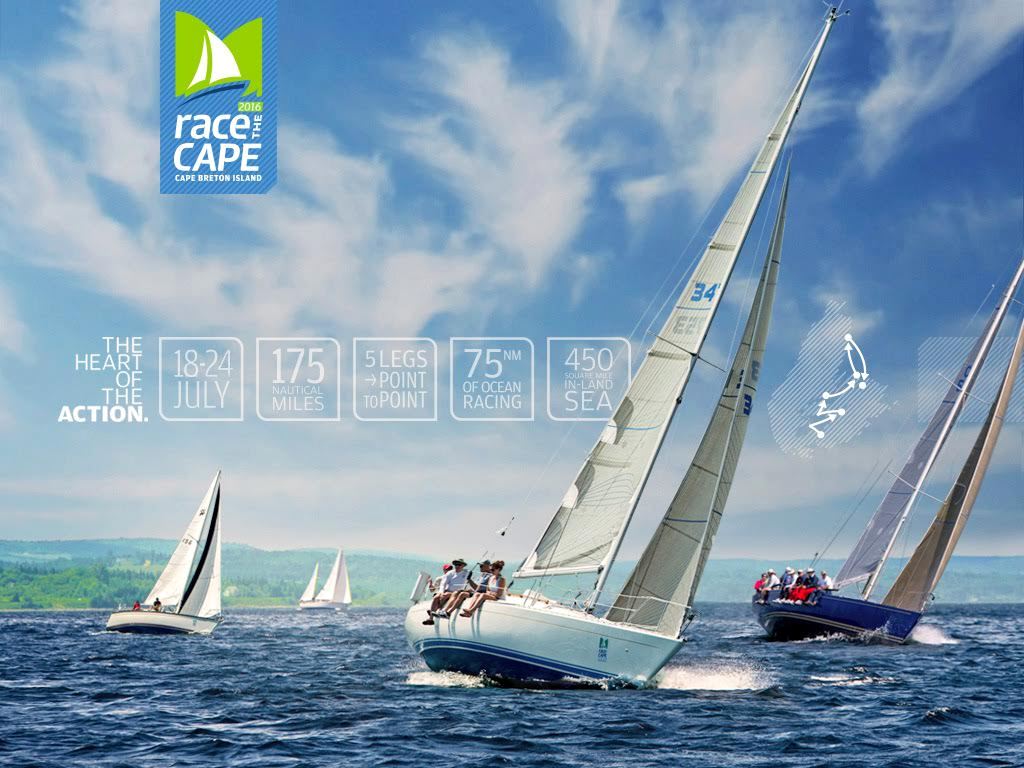 Looking for a distinctive nautical challenge this summer? Want to embark on an adventure that will test your sailing abilities, at times, moment by moment?  From July 18th – 24th experience an exhilarating odyssey through one of sailing’s best kept secrets, the Bras d’Or Lakes and coastal Cape Breton Island: Race the Cape!

“The style of Race the Cape is what appealed to us,” says skipper Colin Mann. From just outside Lunenburg, NS, he and his crew from the J/92 Poohsticks, took home the top prize at Race the Cape in 2015. Mann says they were looking for a new challenge.

“We’d raced the same boat for twenty years and we wanted to try something different to celebrate that,” says Mann. “And none of us had sailed the Bras d’Or Lakes before.”

By style, Mann is referencing the five distinct point-to-point races that make up Race the Cape 2016. Long races, up to 40 nautical miles, changing conditions and new destinations each evening. Sailing in both inland sea and rugged coastal waters, the journey starts at the St.Peter’s Canal, continuing into East Bay, then Baddeck, Sydney, up to the Highlands in Ingonish, ending in North Sydney.

Mann says what surprised him was the extent of the Bras d’Or Lakes — and its variability.

“Part of what makes it challenging and interesting, in a good way, is the range of conditions,” says Mann. “At times there’s completely flat water, very little wind. Then you find little zephyrs and you try to catch enough of those to get a lead.” Then, he says, minutes later, it’s a different story. “Wind can hit at 25 knots and we need to change gears a lot.”

It’s the fourth year for the sailing regatta, covering 175 nautical miles. The high calibre competition sees upwards of 40 boats vying for the finish line each day of the race with prizes awarded at the evening banquets.

Dr. John Kirkpatrick with his C&C 37+ Flashpoint is another seasoned sailor. He was pleased the leg into the Highlands was added in 2015 and is back for 2016 — and acknowledges the hard-work of the committee and volunteers.

“They’re excellently organized races,” says Kirkpatrick. “Everything from help docking the boats to the volunteer’s high energy and warmth, and the sponsors, each community goes all out.”

This moment from last year stands out for him. “Leaving Ingonish the winds were just right for a downwind spinnaker start,” says Kirkpatrick. “And with all the boats fairly close together, it made for an exciting moment, both for those of us on the water and those watching from the shoreline.”

Registrations have been strong, with, to date, three boats now coming up from the USA (ranging from the J/24 Mutinous Dogs out of Texas to the 48’ Hans Christian Offshore Explorer 4750 Sea Dog from New Jersey …who let the dogs out?) to join the mostly Canadian fleet.

So if the daredevil in you seeks a race that will shake things up, immerse you in stunning beauty and yet is supported by down-home hospitality, get your registration in for Race the Cape now. July 18th – 24th — don’t miss out. Spread your sails and jump into the heart of the action.