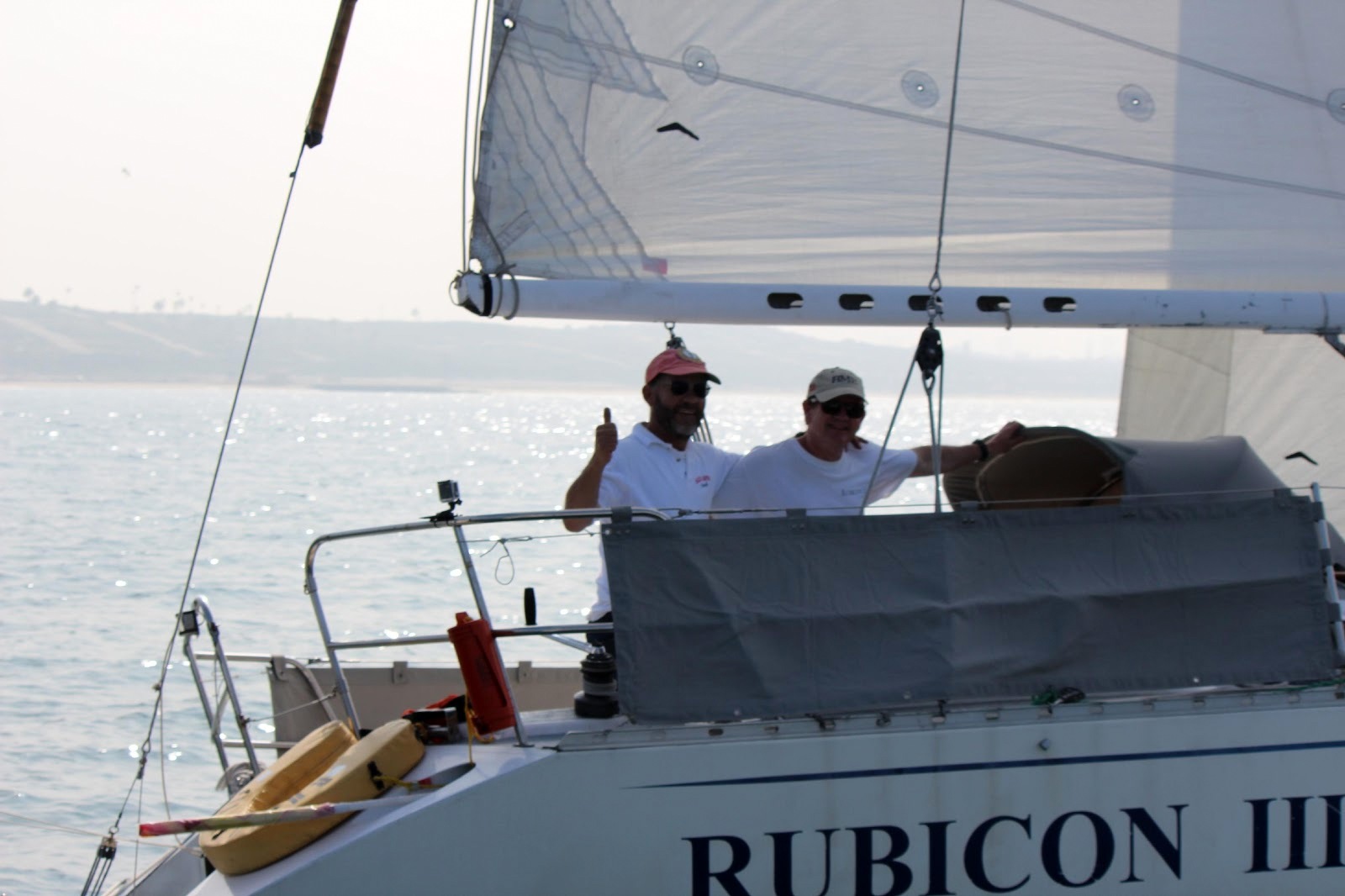 An eclectic band of short-handers wishing to test their mettle by sailing deep into Mexican waters come together bi-annually for this 600nm PSSA event. The race is downwind from Marina del Rey to Guadalupe Island (GI), located 100 nm off Baja California, then  returns  bashing 300 miles upwind into the prevailing Nor-westerly’s. GI is infamous for it’s abundant sport fish, gnarly weather, and home of the Great White Shark.

Winners have ranged over the years from a tiny Ranger 23 up to a Spencer 62, which holds the best elapsed time of  3 days 16 hours and 4 minutes in 2010 (hey Chris, return the trophy bud).
This year participation was thin, but sprit high.  We had singlehanders on an Express 27 (No name) and a Pacific Seacraft 31 (Pavlova).  The double handers included a Seawind 1000 catamaran (Island Time) an IOR vintage Contessa 33 (Rubicon III) and a Sun Fast 37 (Can2).
The pre-race consensus by the PSSA brain trust was that the veteran team on Rubicon would lead the light wind procession out of Santa Monica Bay, and the additional 6’ of waterline on Can2 would propel this experienced crew to an easy victory once in the prevailing offshore breeze.  No one wanted to predict how the Catamaran would perform, which held the speed potential for a line honors victory.
Friday 3/18/2016

On the start-line Rubicon aggressively protected her weather quarter from a barging Can2 and so began the 600 mile match race. The fetch out of Santa Monica Bay was fast as was the passage to the West End of Catalina. Can2 lead this leg with a mile clear advantage.  She had not reached escape velocity however and felt the clutches of the West End hole and slipped behind Rubicon as the fleet headed out into the open waters of the Pacific.

At the 0600hr  check-in Rubicon  lead by a few miles as the wind continued to clock to the Nor-west.  We also learned that the Express 27 was returning to the barn with self steering issues. At first light Rubicon hoisted the asymmetrical spinnaker on the removable carbon fiber C SPRIT  bowsprit.  The boat just came to life and covered the next 250 miles in record time.  Co-Skipper Chris Laubach said “Flying the spinnaker from the C SPRIT made the helming a joy with finger tip control. Much more fun than poling out the spinnaker and fighting roundups with each passing swell”.

Rubicon held off a lead challenge by the Catamaran “Island Time” and kept ahead of the larger Can2 for the entire run down to GI in 15-20 knots of wind.  Can2 came into sight as we approached the Island and a gybing duel ensued. Can2 took the lead then suffered a nasty spinnaker wrap as Rubicon squeezed through on the inside to round the Southern islet first.

Skipper Jamie bellowed a friendly offer for dinner and a cold beer as it grew dark and both boats wallowed in the island wind-shadow.  Can2 cleared the shadow a couple of hours ahead.  When Rubicon finally caught the breeze they set off configured with a small working jib, two reefs and wind vane. The C SPRIT was unclipped and stowed below to eliminate windage. The slow climb back uphill to the finish off the East End of Catalina began with an advantage to Can2 and in the building breeze it appeared she would have her way.
Monday 3/21/16

Next morning the crew on Rubicon was cheered by the news that overnight they had climbed back level with Can2. We tucked in our third reef and hunkered down during the next 24 hours as it blew, then it blew and blew some more as the half gale raged.  The Rubicon crew remained cabin bound, occasionally scanning the horizon for shipping but mostly drinking coffee and reading Kindles as neither the sails or windvane required adjustment. The Contessa powered along on an even keel as she surged back towards the US waters.

Meanwhile self steerage issues forced the multihull Island Time into Ensenada soon after clearing GI, and single hander Pavlova heaved-to for some respite from the raging weather.
Tuesday 3/22/16

The coup de grâce of the GI race is that it finishes in the waters of SoCal which are famous for being fickle and light.  This year however the forecast was for a full gale of Nor-westerly’s accompanied by 15’ seas as the boats approached the finish.  Rubicon retained a narrow lead during this period with Can2 having some seaward advantage. Things were shaping up for a close finish.

At 1800hrs Rubicon was 12 miles downwind of the finish and Can2 appeared on the horizon just 3 miles away. The lead was slashed to less than 1 mile as a scramble of sail changes and covering tacks ensued.   Can2 looked like she was gaining an edge as night fell and it seemed nothing could prevent the larger boat from snatching a line honor victory.  That is until the wind entirely shut down only 8 miles from the finish and both boats were becalmed for hours in the wind-less after seas.

Eventually Rubicon broke free of the calms and went on to win the bragging rights as first boat home in the wee hours of the morning.

At the time of writing the remaining single hander Pavlova is still toughing out the conditions and has 60 more miles to complete the course. Thanks go to Commodore, Stokes and Communications Director, Spear for keeping a close watch on participants.

australian sailing and the sand people