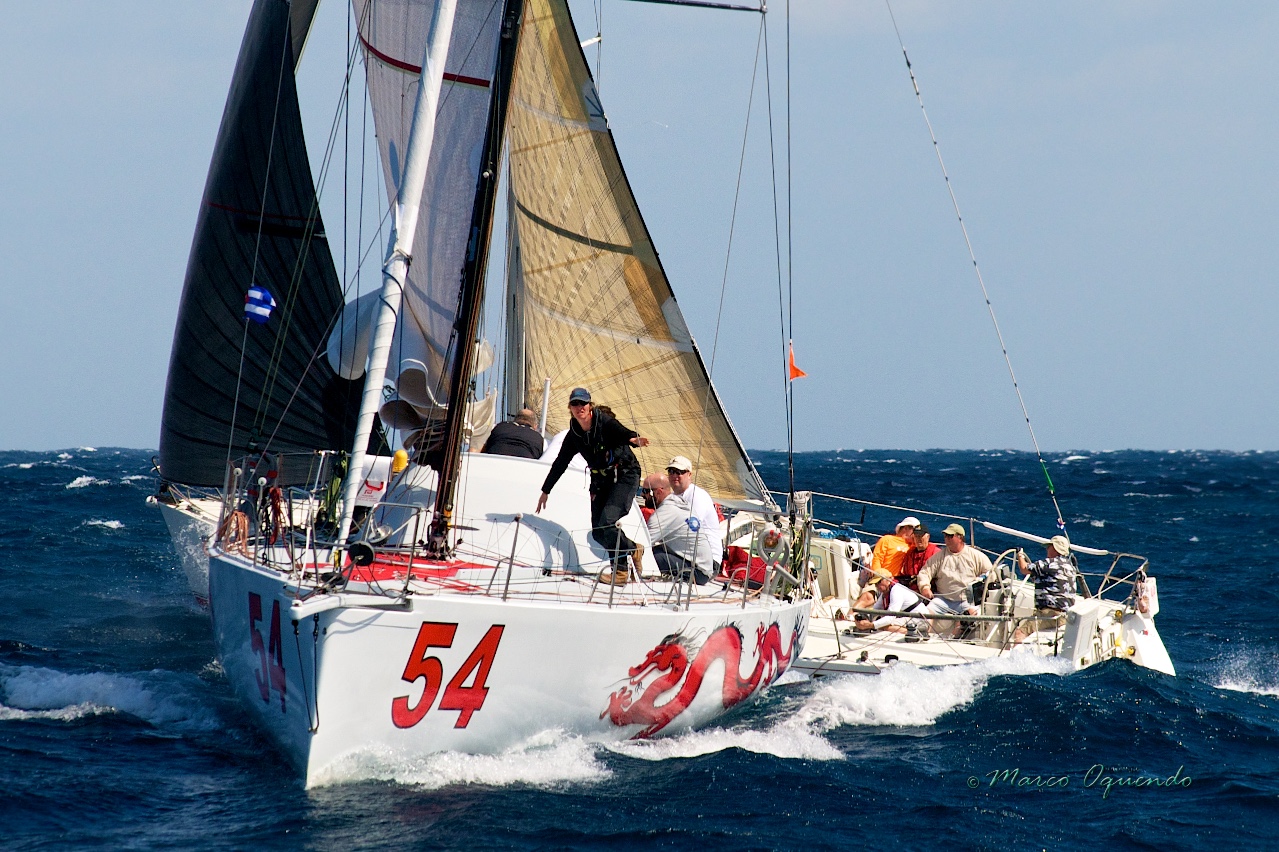 Michael Hennessey goes Latino with another great report, this time from Cuba, after his Class and overall victory in the first-ever Miami to Havana Race.
Photos from Marco Oquendo/SORC with full gallery on Facebook.
Apologies for the late update.  The complete lack of internet or phone service in Cuba got my head into a space where I was not really paying attention to modern conveniences, and the attitude persisted once back in the States.
First and foremost, kudos to Chris Woolsey and the gang at SORC. It is difficult to put together a first class event with participants from around the United States in the best of circumstances, and doing it in this situation had its own unique set of challenges. But from start to finish, this was a really great event.  It helped that the destination promoted itself, but that and SORC’s reputation only meant there were entrants. Everything else came from the effort and commitment of Chris and his team. 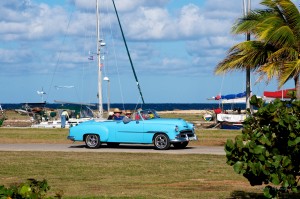 I had prepped the boat in Charleston in late February, and then my all-star crew of Merf Owen and Ashley Perrin did the delivery to Miami on February 4.  They took advantage of the comfortable and romantic amenities aboard to get engaged on the trip, another first for the mighty Dragon.  Then Kyle Hubley and I joined up with the boat down in Miami.
The party and Skipper’s meeting at Coral Reef Yacht Club was a great time, with a slick and fast check-in followed by what seemed like a never-ending open bar pouring cuba libres and mojitos all the rum you could drink.  A great band and a skipper’s meeting that was notable for its limited time spent on bureaucracy and the rousing speech given by Commodore Jose Miguel Diaz Escrich, who clearly has picked up some rhetorical technique from Fidel.  The rest of the event was a great chance to catch up with various folks from all over the place who had come in for this race. 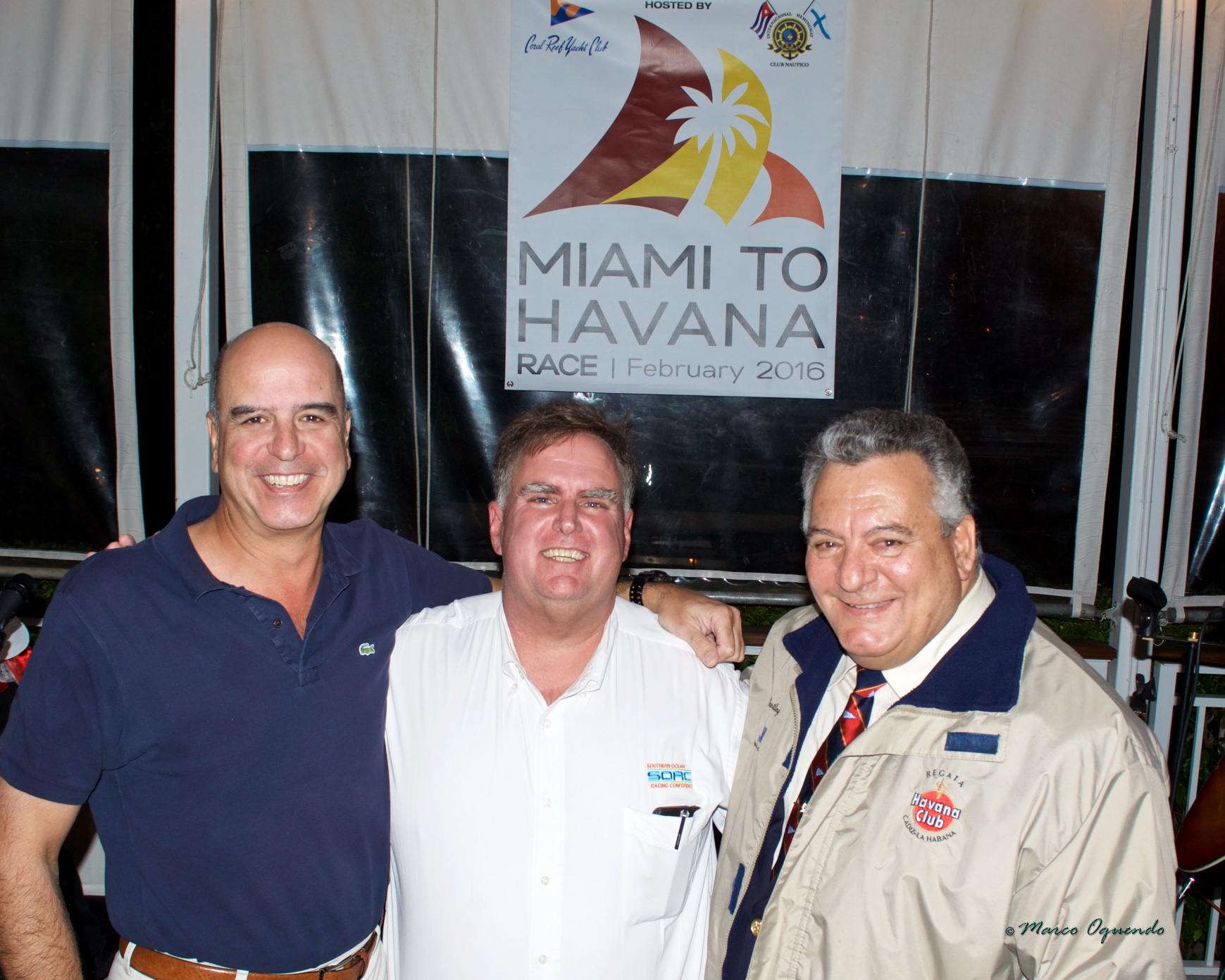 Race day saw us headed out early for a start that needed to be out to the south of the channel to take into account the draft of some of the boats.  Dawn had brought something that looked like 10 knot south westerlies, but that pretty quickly evolved into 5 knot north westerlies.  We went off the line under kite, VMG running.  Most of the leader pack through a quick gybe in to get off shore, where we chose to take it as far as we could to the west and benefited as the boats struggled a bit in what seemed like more current further out.  When they came back in, we had some gains on our Class 40 competitors but were struggling to shake the Santa Cruz 52 and the J111 and J120s that were in our division.  That cat and mouse game continued all the way down to the upper end of Islamorada as the wind gradually picked up into the teens and settled in for a near reach under Code 5 in westerlies.  Those conditions allowed us to pull away from the non Class 40s, but also allowed Amhas and Long Bow to pull forward for what was evolving into a drag race between us.  Long Bow turns out (no surprise) to be really fast in those conditions. 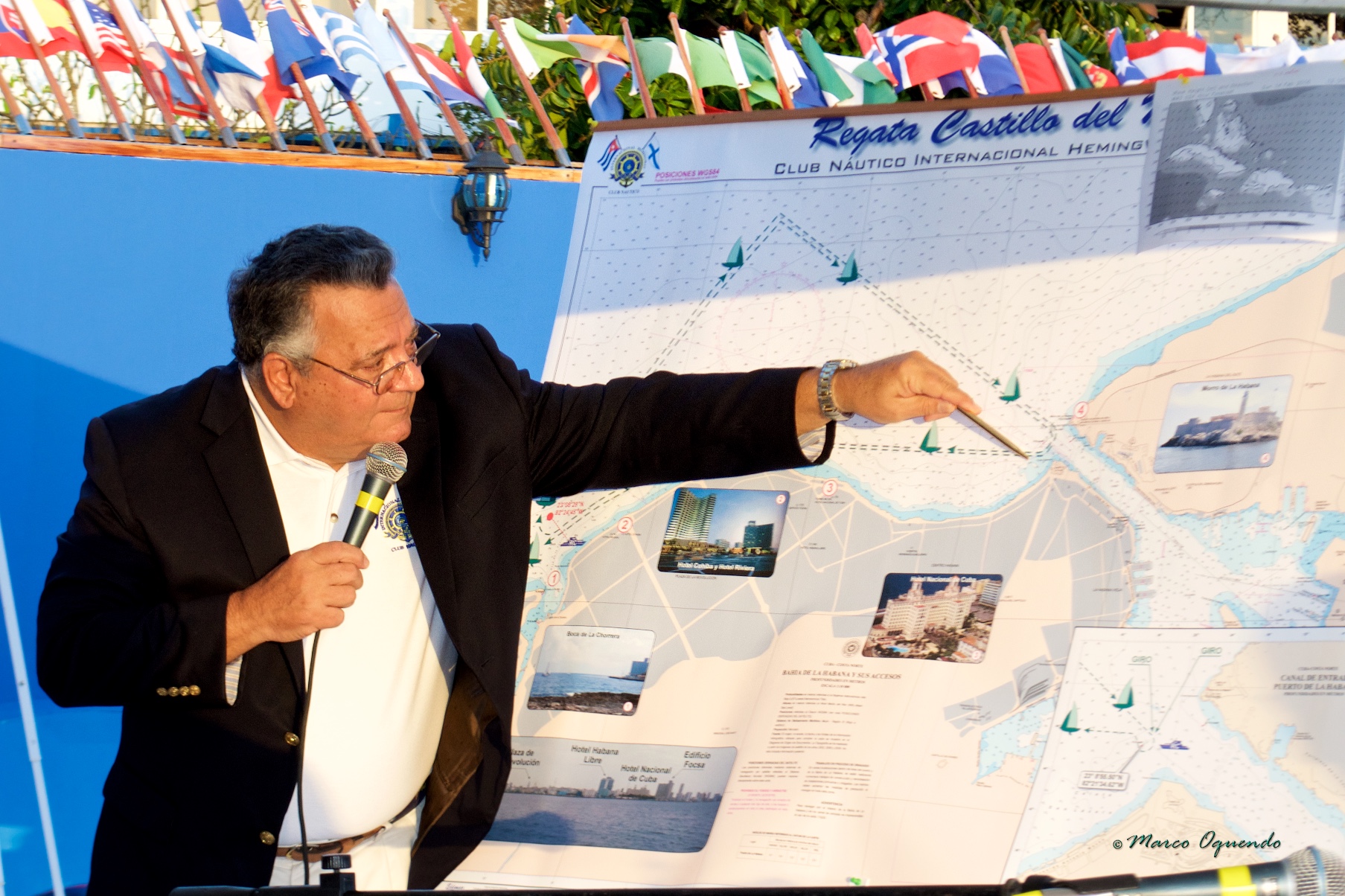 Routing from the Wednesday morning files suggested a near rhumb line race, with a departure from the reef somewhere between Islamorada and just below Key Largo.  Virtually all of the fleet seemed to follow that course, with the distinction of Decision to committed to the most easterly course.  Meanwhile, we pulled the 1800 hour files down and re-ran the routing.  The westerlies we were experiencing were forecast to back, making the rhumb line route much less attractive. It looked like it was going to play out well for Decision who could use it to get east in a hurry and then Gybe on the lift for a straight shot at Havana, but the rest of the fleet was going to be spending a lot of time gybing to the rum and all of it in the Stream with its adverse current.  We chose instead to use the lift to continue the follow the reef line us it curved to the southwest, maintaining maximum reaching speed and minimizing current.
That plan took us to well to the south of Key West, where Ashley called the layline from 57 miles out.  Even a mile less and we would have been gybing, and a mile more would have been wasted.  That last leg was a fantastic run under the A2 at 145 to 150 TWA in 12 to 17 knots.  We had some set to the east from the Gulf Stream as well as much as 2 knots of adverse, and the conditions of wind against tide did not help with the wave state that much.  But even with that, we did get enough wind driven wave action that we could get some lazy surfing during the run and kept up our average speeds. 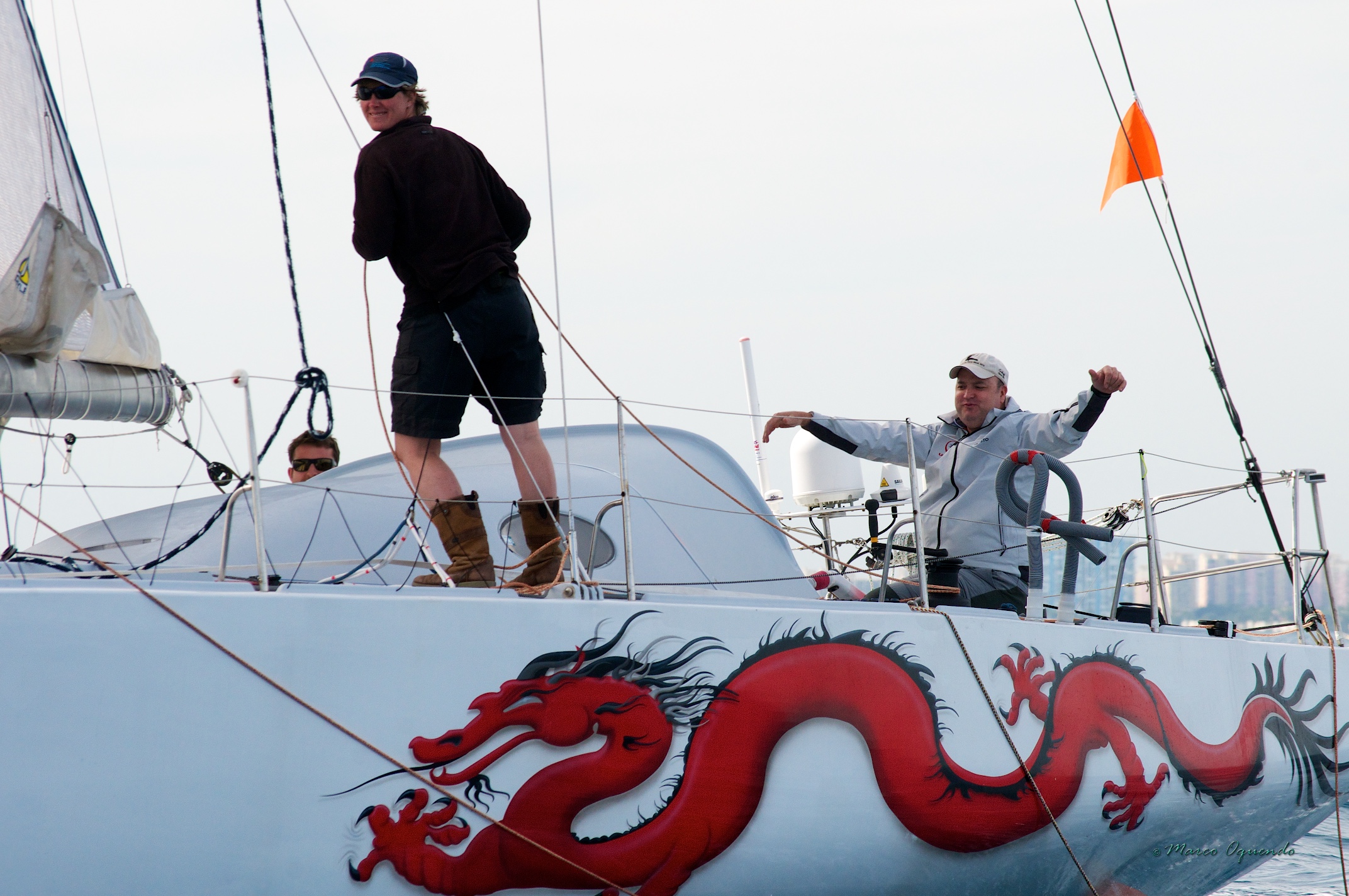 We had not checked the tracker during this race, and as we came up on the coast we were worried about the lack of any other sails on the horizon.  It was pretty clear that we were either going to be animals or assholes given the complete lack of any other boats.  The finish was a straightforward thing complicated only by a hostile lee shore that was just below the government mark where we took our own finish time. Once we got things stowed it was a well marked channel through the reef, with both day and night markers to line up on.  That took us into the manmade lagoon that is Marina Hemingway.  The combination of Customs, Immigration, Health, Vet and god knows what else were very easy to get through other than a lot of signatures.  They were polite and efficient, and the only thing they did that was unusual was to seal our satcomms with tape to prevent us from using them while on island.  Then to the dock, an interview with Clean and tidy up.  The hardest part was getting a taxi from the local hotel to a neighborhood closer to Havana where we had a Casa lined up through Air BnB.
Cuba is a time machine.  The cars are a good metaphor for the island, a rolling museum that is kept going through necessity, ingenuity, and a great deal of pride.   The buildings are a mix of worn but proud colonial architecture along side the American influenced Art Deco work of the early 20th century and some surprisingly well done modernist design of the 1950s.  There are more recent buildings from the time of Soviet patronage which are pretty much what you would expect, low quality and poor design.  In many respects the pre-revolutionary building are in better physical shape than anything that came after.   But the combination of cars and buildings create a mood that is unique, one where you don’t have to stretch very hard at all to imagine yourself back 60 years.  The topper is a complete lack of advertising.  Not a single poster, billboard, commercial, or other form of media pushing you to buy or consume anything.  Coming from a world where we are encouraged to consume by messages on every available surface, this was perhaps the most subtle but also the most pervasive difference.  It makes all sorts of sense when you think about it in the context of a communist society with limited resources, but it was very unexpected. 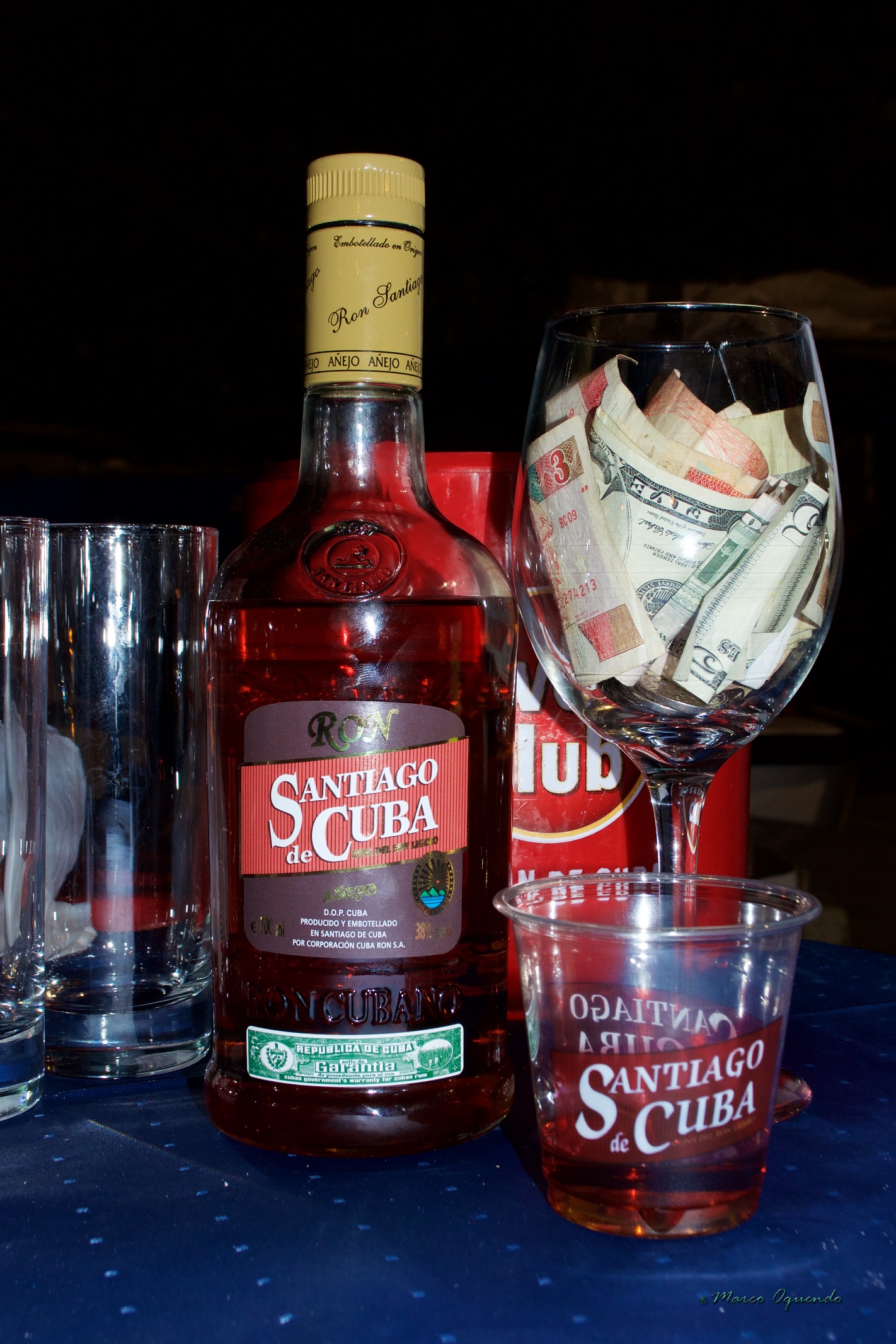 All of the people we met are happy, positive and looking forward to the changes that are in motion.  The Caribbean Communism created by Castro is still evident everywhere. The vast majority of people still have jobs provided by the State, where the government official makes the same money as the driver that they are provided.  They still use ration cards, where each person is able to go to their local bodega (and only their local bodega) to buy food and clothing.  Anything else has to be purchased using the CUC currency meant for foreigners.  They don’t have much, but they have enough.  And it is notable that we did not see a single homeless person, a single beggar or other person that did not look like they were at least cared for in some way.
In some respects, its interesting to compare Cuba and Puerto Rico when trying to judge the impact of the Revolution.  Two island states, with economies that struggle with similarly limited resources and options.  One has worked under the umbrella of the USA and unfettered capitalism for the past 60 years, and the other has been led by Castro with initially Soviet patronage and then some help from Venezuela in the past couple of decades.  Is Cuba really any worse off than Puerto Rico?  In many respects, they are better off.  Less abject poverty, far less debt and a far less precarious future.
The job system, and lack of ownership has created a culture that lacks ambition, but the desire for more had lead to a robust black market economy that has now been given legitimacy by Raul Castro.  Only in the past two years have they been able to own their own homes, and to start businesses.  Those that forego a state job to run a Casa, or the private restaurants known as Paladars or their own taxi service end up paying taxes to the State, somewhere in the range of 50%.  Which, when I think about it is about the same amount I pay in Federal, State and Local taxes.  Those allowances are driving a strong current of change.  There are signs all over Havana of grass roots efforts to renovate homes and buildings, along side what are clearly state sponsored efforts on bigger hotel projects.
It will be interesting to how Cuba navigates this evolution from Communism to a hybrid economy, and how thawing relationships with the USA impacts them.  One thing is for sure… there will be change and as a result some of the things that make it unique will vanish.  You should get there soon.
An epic awards party and pig roast on Sunday night ensured that we headed back on Monday with sore heads and bad stomachs, enjoying a 35-knot bash uphill to Fort Lauderdale.  Wind against Stream made it wet and uncomfortable but quick, and we pulled into the Cut just after dawn only to be hit by a ferocious front that saw sustained winds in the 50’s and rain so hard that we could not see more than 50 feet.  Which is probably a good thing, since apparently a tornado touched down just to the north of us, and then another one to the south of us.
We saw Ashley and Merf off, got the boat cleaned up, fixed our fuel system and oil sender, and caught up on sleep.  We shortly shove off for what will hopefully be a 35 hour trip up to Charleston, and then back to the real world.
Viva Cuba!