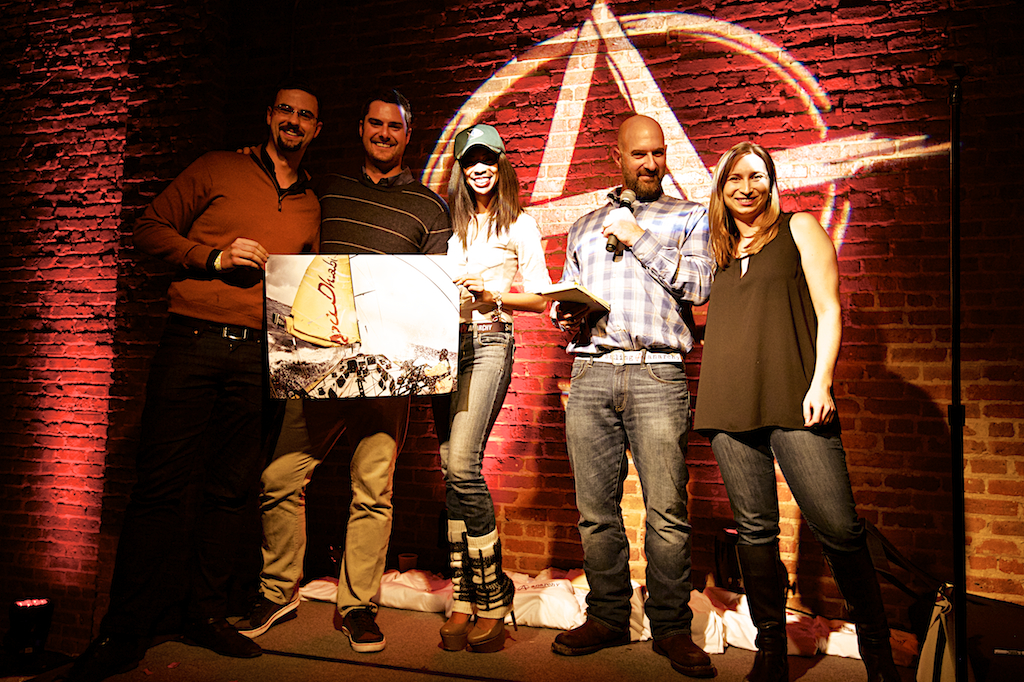 A YUUUUGE thank you to the more than 300 of you who attended the 9th Winter Anarchy drunk-a-thon at the Bottom Lounge last weekend, and to the dozens of volunteers, sponsors, and of course Morgan Kinney for putting it all together.  We’re proud of the roughly $7000 you all raised for the Skin Cancer Foundation, and we’re even prouder that we found a way to help an important cause a little bit while having a good time with great people and giving away some creative and awesome prizes.  We’ll have important news for the 10th Anniversary of Winter Anarchy in the next few weeks; whether you’re a sponsor or a partygoer, you most definitely will not want to miss it.
There are still a few Special Edition 2016 Winter Anarchy tees left; if you pick one up before Monday, Morgan will throw in a new SA alloy buckle belt with it.  All profits go to Skin Cancer Foundation.
Show Off
Key West and Chicago’s Strictly Sail show were the industry’s ‘must attend’ winter events for years.  The boat show, though, wishes it only contracted by the third that Race Week did over the same period of time.  Plagued by America’s general move away from boat shows and an expensive show at logistically difficult Navy Pier, Chicago’s big event moved last year away from downtown, becoming the tiny third wheel in the ironically named ‘Chicago Boat, RV, and Strictly Sail Show‘ at the huge McCormick Place convention center.
The sailboat industry was, quite literally, a side show, and few vendors had any optimism at all about making any kind of money there.  It remains a convenient spot for many industry workers to work out deals and check in with far-flung friends, but with fewer exhibitors than ever, there aren’t many out-of-towners coming in anymore.
For locals, it’s another story; a great excuse to break up the coldest part of the winter with a few drinks and a peek at the few interesting things there; the full J line up, relatively new dinghies from Melges and RS, and a few bits of hardware and software scattered around.  Area Yacht Clubs were looking for members and promoting their races, while a few MCSA university teams showed up to find supporters and recruit sailors.  But the show was dominated by the ACWS Chicago booth that was loaded with the baubles and trinkets to suck almost any sailor in.  VR goggles with the full AC45 onboard experience loaded in, a one-on-one match race game complete with carbon wheels, and even a long line to take your selfie with the real America’s Cup, which somehow managed to look gaudy even against the backdrop of a tiki bar set on a fake beach under a plastic palm tree to the sound of a live Jimmy Buffet impersonator.
Don Wilson’s ACWS organizing group included a diverse mix of volunteers doing their best to spread the message, and heavily discounted tickets seemed to be selling at a brisk pace.  It’s a very different place from Newport, but the pride amongst many local sailors that an America’s Cup(ish) event was coming to town reminded me of Rhode Islanders just before the Volvo.  Will the windy city turn out 130,000 fans for the ACWS like Newport did for Brad Read’s Volvo?  Not a chance.  But if the weather doesn’t make a complete mockery of the silly two-day format again, the event could easily hit her smaller targets and be considered a home run by AC teams, hospitality sponsors, and the City.  There’s also another reason to go: It could be the last time anything like it sees freshwater.  Alternatively, it could be the pioneer event that opened Chicago to inshore racing’s upper echelons.  It’s no secret that Wilson has big aspirations in the sport, and both his passion for racing and his bank balance are both off the charts.  That’s a potent combination that’s brought the billionaire commodities trading genius plenty of success on Melges 24s, Farr 40s, and match racing boats, and last week Wilson helmed his M32 cat to victory in Bermuda against three pro helmsmen.  Could we see a Chicago America’s Cup team some time in the next decade?  Sure.  And you can say you knew them way back in 2016.
My trademark Mr. Clean shaky cam footage of the boat show is below.
Spreader-level overview of the show
Lightning Round look at new stuff
Should you make plans for the ACWS-Chicago?

mentored Ryan Breymaier talks about how hard they beat on Open 60s in the Southern Ocean, what the next Vendee might hold for the good ship Neutrogena,