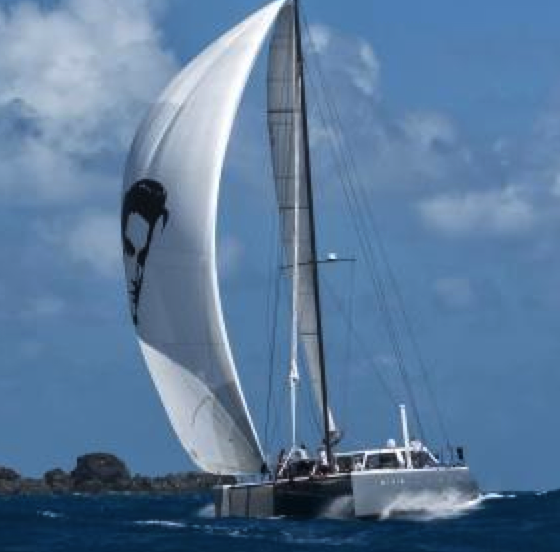 2-time Melges 32 World Champ Jason Carroll doesn’t do things by halves, and he poured a small fortune in upgrades into the well-worn Gunboat 62 Elvis over the winter in preparation for an active 2016.  Ryan Breymaier took the Navigator’s award last week guiding the big cat from Lauderdale to Key West.  Here’s RMB’s first (of many) high-speed reports from 2016:
The forecast was for northerly 15 knots at the start and easterly at the finish, which would have meant short-gybing all the way from Lauderdale in order to avoid the worst of the Gulf Stream current; not the forecast we were looking for, considering that Elvis has been modified with 4 meters more rig, a longer boom and a longer bowsprit in order to power the boat up and fix persistent lee helm.
The end result of the mods is that the boat has 50% more mainsail and 55% more downwind sail, with a roller-furled, tight-luff gennaker replacing a spinnaker in a sock. We were afraid that we would not have quite enough power in the VMG conditions with a tight-luff sail and would have bad gybing angles resulting in about a thousand gybes down the course.
The boat also has bigger winches to deal with the sailplan, a real traveller and hydraulic mainsheet (instead of a bridle mainsheet to the transom corners), and the secret weapon; tillers which allow steering from outside instead of the wheel inside just aft of the mast – which is ideal for communications and comfort, but not at all for feel.
Start day dawned exactly as predicted with a nice northerly. We happily got our favored pin end and headed offshore on port with the big A3 pulling nicely.  We even lifted a hull as we crossed the line! Regardless of the adverse stream, there was more wind offshore and we wanted to avoid the wind shadow that is often found near the Miami skyline.  This was an immediate split from our main competition, the newly launched Arethusa, 60 feet of Nigel Irens-designed Gunboat. They outweigh Elvis by around 8000 pounds, but have a big mast and the soft luffed full-size kite which we feared would be our undoing.
As Arethusa (and most of the fleet) headed inshore, we made a couple of short gybes and stayed in the pressure offshore, especially in light of the approaching transition zone which we could see in the cloudline ahead.  Sure enough, we ran into the clouds and were rewarded with an earlier than expected easterly shift and pressure.  We started to soak, but not too much in order to keep the speed advantage given by luffing slightly with our tight luffed sail.  Elvis loves this; we were sailing between 2 and 5 knots faster than the breeze at 130 TWA.
After a little while the northerly tried to reassert itself so we went back inshore to consolidate and cemented about a 4 mile lead.
We had been watching the radar further down the course, where there was plenty of squall and rain activity.  This is classic KW race behavior, with the northerly on the north side of the keys fighting against the easterly breeze offshore.  As the squall line  showed itself to be just South of the lower keys, tactician Anthony Kotoun and I agreed to gybe back inshore in order to get into it as late as possible.
We were rewarded with a huge northerly shift as we got to the beach with the TWD going from 75 to 350 in the space of about 5 minutes.  We were on starboard so we just bore away and found ourselves headed SW in the perfect direction down the rhumb line, but directly into the squalls.
As we came into the first rain the breeze came up quickly and we eased sheets to stay on course and peeled to our Screecher/FRO, and one of those spectacular runs you hope for came together; 30 knots of boatspeed at the peak, with about an hour around 25.  Awesome crew work from the Elvis crew through 3 headsail changes and reef in and out allowed us to stay at full speed, putting a further 8 miles on our competition.  That’s when we decided to do some monohull hunting, looking for Wizard and Spookie, who had started half an hour ahead of us.
As we finished the last 25 miles of the race we realized that Wizard had the VMG edge on us (to be expected as they are 70 feet or so and very well-sailed) and that we were just slightly faster than Spookie who we passed in the channel heading up to Key Weird.
Unfortunately for the more awake amongst the crew, we arrived a couple hours after last call and so had to content ourselves with a big lunch and even bigger evening the next day.
I am definitely looking forward to getting to the Heineken regatta where there promises to be a big Gunboat fleet to line up against, as well as the awesome dock parties which I am confident we can also win, especially given all the training the boat’s built-in rum pump has given us all!  The Elvis team are a great crew; sailing regularly with the same core team shows in the quality of teamwork on the water. It’s also been a lot of fun for me to reunite with some guys I haven’t sailed with since college 13 years ago – a great way to start the 2016 racing year.
Ryan out.