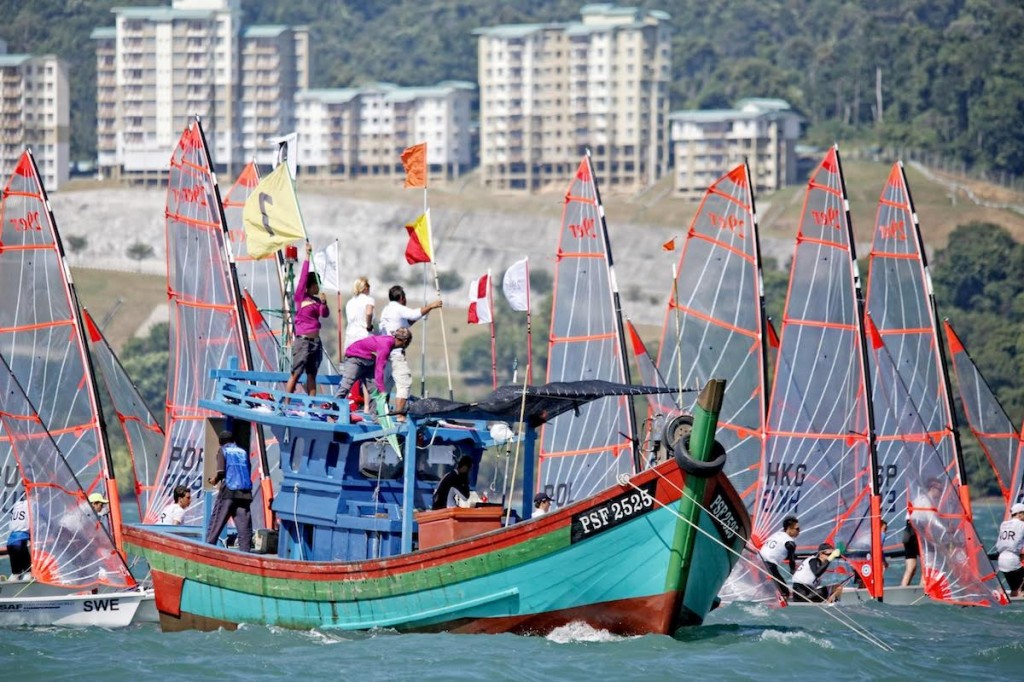 As we reach around the half way stage of the 2015 World Sailing Youth World Championships let’s forget the politics for a while and concentrate on the actual event itself, the over 400 kids who are here to compete in – to coin a much overused cliché – champagne sailing conditions except here they truly are.

Ironically the event was expected to be a light weather event yet every single day so far has seen had breezes in the high teens with one day showing gusts to 25 knots and yesterday, originally planned as a lay day but with the SL16s having to play catch up due to delays on the arrival of equipment, one course was still operational with enough breeze to put a couple of these potent little cats over in race one. Both boats recovered and headed for the finish with cruelly the finish line closing just seconds before the final boat reached there.

Nine World Championship titles up for grabs and despite talk about the whole event being demeaned by the absence of two sailors there are at least 7 classes where the result will be totally unaffected.

Sanctions that have been bandied about on blog and websites all the way up to cancellation really will do nothing to bring the two extra sailors to the event now and do nothing more than spoil it for the 400+ youngsters that are here. That’s not to say there are answers to be given but not – in my view – during the event. Let’s just let the kids that are here have their say for the next few days, it is their regatta after all.

Day one saw a hold on shore while the spring tide returned enough water to the slipway to allow everyone to get waterborne. It is only when you are physically at an event like this with the most distant class, the Lasers appearing as dots on the horizon that you start to realise the size of the task in running such an event. As mentioned The SL16 stayed on shore due to a slight hold up on the arrival of some of the equipment but from there on everything appeared to go smoothly with the event and the protest room trade has seen a relatively small amount of trade.  has been delayed as some small parts have been delayed in shipping –something else that will no doubt be laid at the door of World Sailing.

But all the rest hit the water with a haste and obvious enthusiasm as soon as the AP on shore was lowered with the conditions proving too much for at least one 420 crew which returned to the slip in under an hour but like the title says it was ‘pumping’.

Some sailors went for a swim but the smiles being worn by the majority as they came ashore spelled a good day on the water.

And that set the pattern for the regatta with winds which at sometimes hit gusts of 25 knots, those teams which had banged the ‘light crews’ corner too much found the conditions a challenge. 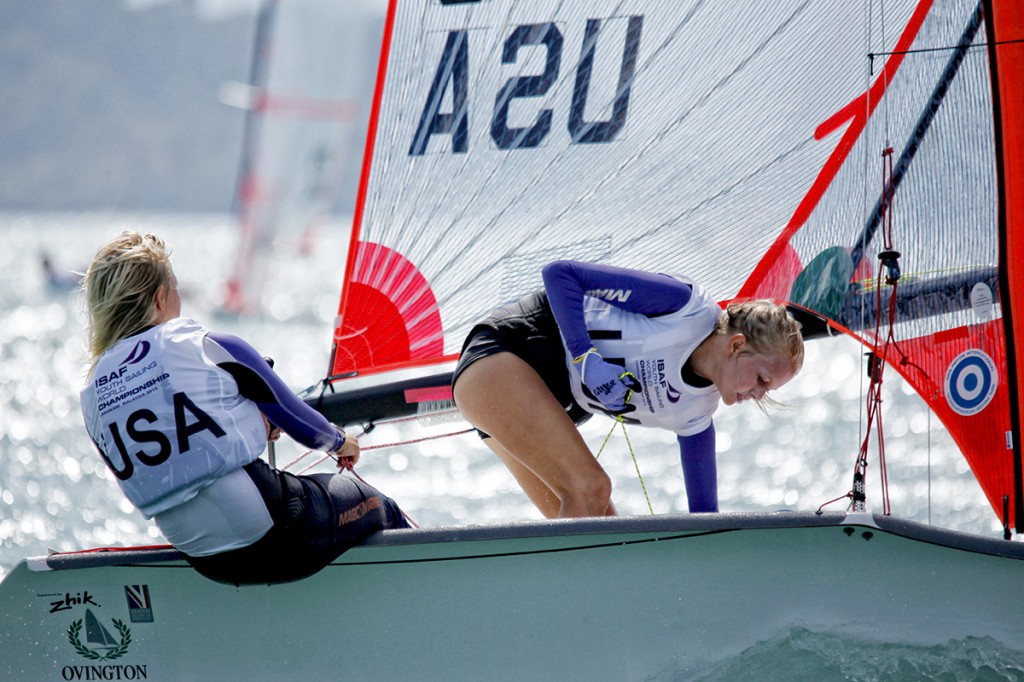 The two fleets of SL16s, like all classes provided equipment had conditions imposed where they had to sail with fixed rig settings as to change these would have given the morning fleet a much longer time than the afternoon fleet with the difference deemed unfair.

It seemed to make little difference to the two teams at the top of the respective fleets with the Australian duo of Connor and Renouf in the blue fleet discarding a 3rd to post a score of 7 from 8 races. This was only bettered by the French coupling of Flament & Dorange discarding a fifth place for a similar scoreline of 9 points from 10 races.

There were a number of other classes where crews were starting to stretch away with othes equally close. In the Laser Radial Boys Alistair Young of Australia heads the leaderboard on 9 points after scoring bullets in half the races he has sailed opening up a gap on 2nd placed Oskari Muhonen (FIN) on 18. No such gap exists in the Girls fleet with Erdi (HUN) and Kwasna (POL) locked together on 12 points with two wins apiece.

Over in the 420s the Boys from the USA, Will Logue and Bram Brakman are proving consistency is a little more important than a bullet or two in starting to open a gap between themselves and the pairing of Brodie & Smith (AUS) with the gap standing at 5 points while in the girls fleet, Jerwood & Smith (AUS) and Szmit & Dzik (POL) have similar sets of results to each other with just a 2 point advantage to the Aussies.

Over in the 29er Boys with 5 bullets counting in theior score you would expect that, after 10 races Jackson Keon and Nick Johnson (NZL) would be running away with their event but their score of 31 is only 5 lower than that of Thomas Mathisen and Mads Mathisen (DEN). One good/bad race could change all that in a blink. Over in the Girls Carla Carrassco and Marta Carrassco (ESP) lead on 34 points but just 4 points behind them are two crews, Kronlof & Hokka (FIN) and Stewart and Stewart (NZL) with (DEN) and (POL) also within 10 points of the leaders – no room for error at the top of this one.

In the RS:X Boys Titouan Le Bosq (FRA) is starting to stretch away with 22 points from 9 races leaving his nearest rival, Francisco Saubidet Birknet 8 points adrift. Over in the Girls the situation is a lot closer with Stefania Elfutina (RUS) holding the narrowest of leads over Xian Ting Huang(CHN) 15 plays 16.

The final trophy up for grabs is the Nations Cup with the Antipodeans in the box seat. First 5 nations being AUS: 212 Points; NZL: 195 Points; USA: 175 Points; FRA: 160 Points; and GBR 147 Points. Still a fair bit of sailing left in this regatta and unless there is a dramatic change in the weather there is lots more action still to come. Pics by Christophe Launay with tons more shots here.