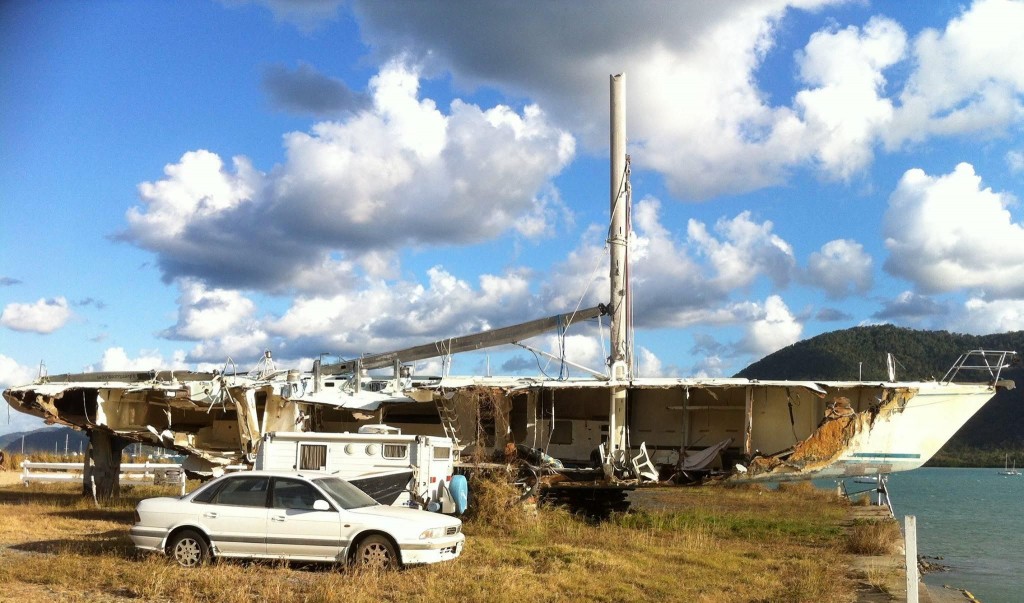 I was trolling Facebook and stumbled upon some terrible photos of a boat I knew well. The Card, a Farr maxi built for the 1989/90 Whitbread Round the World Race. According to a brief report the boat broke free of her moorings and drifted onto the rocks of Whitsunday Island. The damage was done before the boat could be salvaged.

The project to build The Card was started by Skip Novak in 1988. Skip had a rich businessman interested in entering a boat in the upcoming Whitbread and it was decided that they would build the boat at Goetz Marine near my house in Rhode Island. There were two other Farr boats being built at the time; Steinlager, the eventual winner of the race with Peter Blake in charge, and Fisher and Peykel which Grant Dalton skippered. All three were ketches. Somewhere along the way the rich businessman gave up on the idea. F&P however, continues on as a charter boat. The thing looks pretty good here – too bad they aren’t flying the mizzen!

I heard that his wife owned race horses and I am betting he could not afford both. In any case the project was picked up by the Swede Roger Nilson who had managed to secure sponsorship from MasterCard. Skip and I were out and we both eventually teamed up with Fazisi, the Soviet Union entry in the race.

Many will remember the incident that happened at the start of the leg in Auckland, New Zealand. The Card took a bit of a flyer and sailed out of the zone that had been cleared of spectator traffic. They were in among a very dense spectator fleet when a puff hit. The boat heeled and the mizzen mast on The Card snagged the mast of a moored yacht. The anchor held, The Card kept sailing, and the mizzen came crashing down. The Card came fifth in that race and I was never sure what happened to the boat.

It’s kind of like old friends. You lose track of them and only hear about them again when they die. So many people sailed on this great boat that seeing her like this feel like a sad death to many.