at the end of the day

Brian Hancock takes you around the horn. Click on the graphic below for something else good… 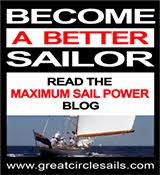 I have been lucky enough to round Cape Horn twice under sail. The first time was in a full gale and we actually ended up capsizing right at Cape Horn. We were about a quarter mile off the famous landmark when the helmsman turned the wheel the wrong way and over we went. It’s a long story. The second time; light headwinds… Cape Horn has been a huge part of my life from when I was a kid reading all the stories about famous sailors getting pounded by gale force winds to the whole lure of Tierra del Fuego, the land of fire and the voyage of Darwin aboard the HMS Beagle.

So it was interesting to read that the French sailor Frank Cammas is going to attempt to round Cape Horn, foiling, on a Nacra 20 catamaran. Wow, an undertaking as extraordinary and ambitious in its audacity that it could only have been thought up by a Frenchman. Cammas is no stranger to the worldwide sailing community. As skipper of Groupama he won the 2011/12 Volvo Ocean Race and on the massive Trimaran Groupama 3 he set a new Jules Verne record for the fastest non-stop circumnavigation. Those are just two of the many victories that Cammas has on his resume. But this trip will be different. This will require, skill, luck and most of all, patience.

A number of years ago I spent some time cruising Tierra del Fuego. It’s stunning territory and contrary to what you would think it’s not always blowing a gale. In fact it’s often flat calm or there are very light winds. Cammas and his crew mate Johannes Wiebel will just need to be very patient and pick a weather window that allows them to successfully make the trip. They will start from Ushuaia in southern Argentina and sail through the strait that separates Isla Picton from Isla Navarino. Once past those islands it’s a straight shot to Cape Horn, a total distance of around 100 miles. The tricky thing is going to be finding enough wind to keep them going in the wind shadow of Isla Navarino and hoping that once they are clear of the mountains that the wind is not blowing too hard. Isla Navarino stands at almost 4,000 feet above the Beagle Channel. I know this for sure because I have stood atop the mountain. It casts a very long wind shadow.

The plan is for the crew to actually make landfall on Cape Horn and pay a visit to the lighthouse keeper, something that is on my bucket list. I heard that you can actually buy a postcard there and mail it from there. Pretty cool. So it’s going to be interesting to watch how they make out. There, are the bottom of the world in a teacup sized boat will be one Frenchman trying to set a new world record, while far to the north his fellow Frenchmen will also be waiting for a weather window to set off to try and break the Jules Verne record. Currently both Spindrift Racing and IDEC are on stand-by for the perfect weather conditions to sling them down to the equator.

I guess at the end of the day it’s all about ambition and patience if you want to set records and break barriers.