there will be a new champion 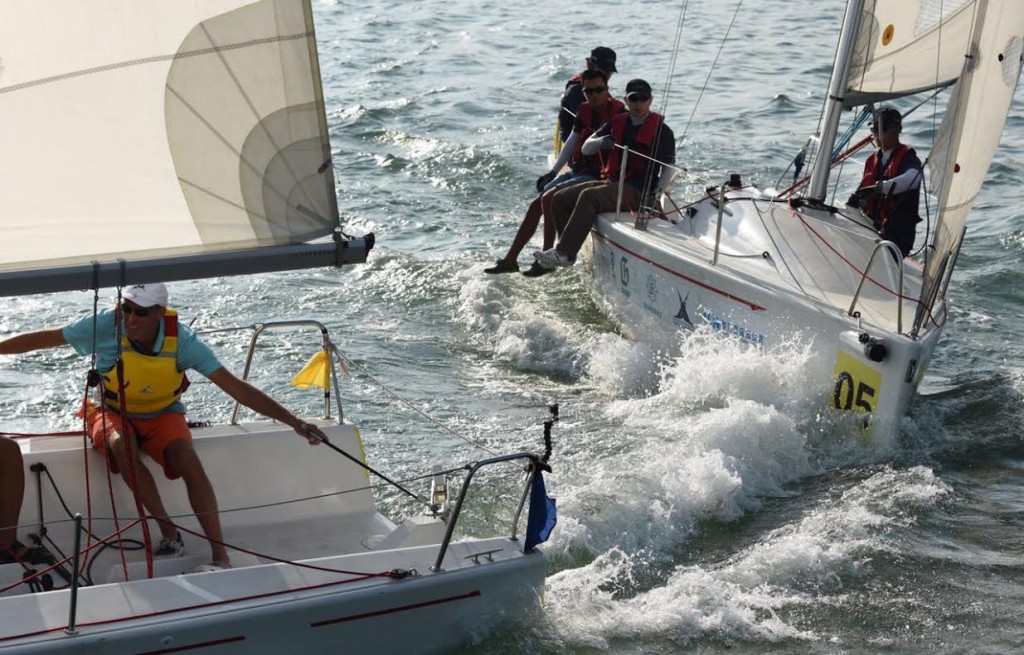 There are not many events where beforehand such a statement can be made but with the 11th China Club Challenge Match the finals held in Wu Yuan Wan (Wu Yuan Bay) that was the only certainty. The format normally leads, not to a champion,n but the right to challenge last year’s champ, the ‘Defender’. Sadly the team who won the ‘Club Cup’ as it is often called in China having lost their sponsors couldn’t attend.

That did not, however, take away from the quality of much of the racing and a heady schedule lay in store for the race officials with 16 teams entered having qualified through the fleet racing element a few weeks before. A late withdrawal by two Shanghai teams eased the pressure a little – perhaps they felt the heat in the ‘kitchen’ was going to be a bit much for them.

Although there were sailors from 6 or 7 different countries, all teams primarily do their sailing in Greater China making this truly a regatta that develops and helps improve standards in our sport in China and right from the get go it was busy out there on the water.

The umpires were led by IU’s John Rountree and Wayne Boberg from New Zealand, who can both count a few America’s Cups in their long and varied umpire logs assisted by two local aspiring umpires Sam and Al. They were kept pretty busy with flags of every colour flying mainly the yellow and red Yankees but a fair share of blues and yellows as well and although the predominant colour from the umpire boat was green the day also saw 3 blacks. 3 blacks sounds a lot but a number of the competitors showed their inexperience by not remembering a 2nd penalty had to be done as soon as possible.

A long day on the water for the officials with 21 races across 11 flights with a wind that wasn’t always quite as cooperative as everyone would have hoped.

Day two started with similar conditions – in other words no wind – and after a sizable hold on land the first of the competitors headed out to do battle. As one would expect, the day was overall somewhat more combative than day 1, not only because the sailors were a higher standard but the previous day had sharpened their mettle – the Club Cup is, after all the only match racing event in China anything like this size or standard.

A couple of further teams withdrawals, perhaps knowing their limits gave a couple of byes along the way but the expected teams then faced off in Day 3’s final and petite final. 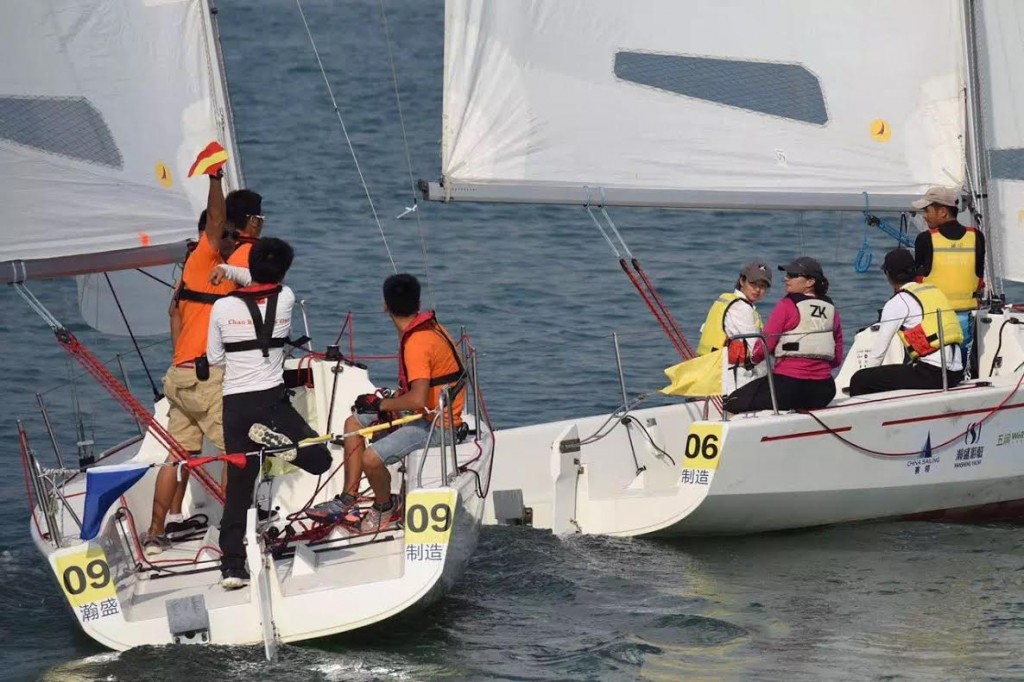 The form team, Hero Racing from Hong Kong had it pretty much their own way showing what sailing with a familiar team and in multiple events (talent helps as well of course) hardly missed a beat from their first race of the event until they crossed the finish line in the final with a 3-1 advantage. The only exception being when following their opponents round the bow of the committee boat they failed to remember that is wasn’t being held on station by thrusters and that rope at the front was indeed attached to an anchor. Of course hooking the anchor line was no more than embarrassing until they had to fend off on the boat itself. This of course added a “penalty blue!” to their woes. A mark of this team that, once free of the anchor line and carrying a penalty, they still sailed the course, did their penalty and recorded, what was to the best of my recollection, their only defeat of the whole regatta.

The day on the water was followed with a prize giving on the dock, back to the hotel for a quick shower with the event concluding with the sort of excellent social evening and event dinner with free flow beer the Club Cup is almost as equally well known for – in fact the bar was drunk dry.

So a few wounds being licked, one or two complaints of having a ‘slow boat’ (that’s why they swap them every other race) but strangely those complaining of a slow boat also had a transom flag matching the one flying from the umpire boat – an upwind gybe or a downwind tack makes any boat slow.

So, just 11 months before competitors are back in Xiamen for the elimination round  for the 12th China Club Challenge Match and as I was told by a number of competitors they were going to do better next year they better get out there practicing because every year the standard just gets better and better – it’s in my diary already.