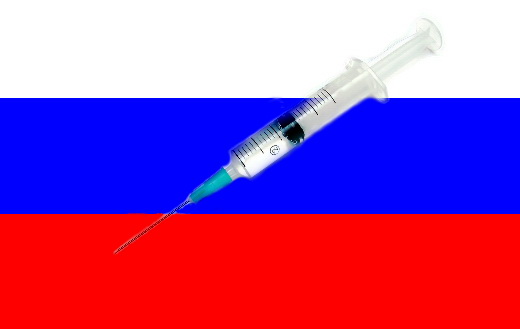 Russia’s recent sporting exploits include allegedly fixing the bid along with FIFA for the 2018 World Cup and using the Sochi Olympics to divert attention from an armed buildup that would turn into an invasion and annexation of a sovereign neighbor, so it shouldn’t surprise anyone to learn that the Russian government has run a huge state-sponsored doping scheme for its Olympic athletes.  But even the most jaded Russophobe might still be shocked at just how big and pervasive the program was.

The doping scheme was uncovered by a German TV report almost a year ago, and in the meantime,  WADA – the independent agency charged with investigating and preventing doping in the Olympics and many other high-profile events – spent a small fortune investigating the charges. This morning, they released their over-300 page report, and it’s nasty.

The New York Times wrote that “Members of Russia’s secret service intimidated workers at a drug-testing lab to cover up top athletes’ positive results.”  FSB agents “impersonated lab engineers during the Winter Olympics in Sochi last year.” A lab once destroyed more than 1,400 samples to keep them from the investigation.  “Athletes adopted false identities to avoid unexpected testing. Some paid to make doping violations disappear. Others bribed the antidoping authorities to ensure favorable results, and top sports officials routinely submitted bogus urine samples for athletes who were doping.”

The report implicates athletes, coaches, trainers, doctors, and the Russian institutions and government agencies that helped engineer and fund the program, and we’re still reading to find out whether it was as big and unethical as the Soviet and East German programs of the 60s and 70s that are credited with creating modern blood doping.  Interpol is starting criminal investigations, WADA discredited Russia’s national testing lab, the IAAF are discussing Russia’s punishment while everyone’s trying to figure out who gets their medals stripped – and who becomes a newly-crowned medalist.

Finally, Olympic Sailing finally gets some freedom from the pollution limelight – but only because the Russian Sailing Team needs a lot more than steroids and adderall to start winning.  Surely ISAF is praying that their prominent partner had nothing to do with the doping despite being a major sponsor for the Russian National Team…’cause Gazprom doing something unethical would be a huge surprise…

And of course, old Vlad is denying the whole thing as either a fabrication or a conspiracy. Just like those fabricated tanks in Crimea.

you have been warned