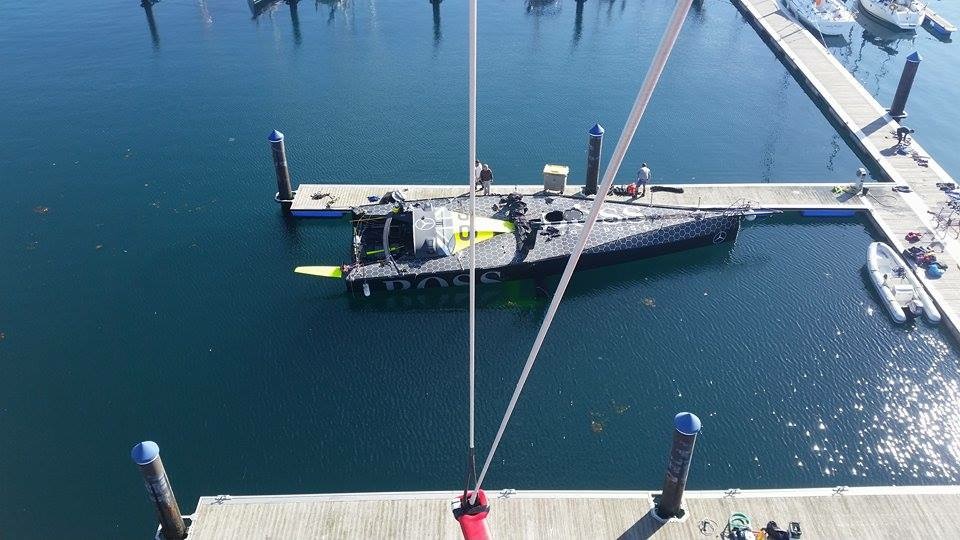 UPDATE: BOSS IS BACK ON THE DOCK!

We’ll have more information directly from co-skipper Alex Thomson as soon as he has had some rest.

We spoke to  exhausted ATR Managing Director Stew Hosford a few minutes ago as he boarded a plane for Vigo, Spain, and he was glad to have the chance to update Alex and Guillermo’s fans around the world.  Here’s the exclusive report on what happened and what’s coming up from Mr. Clean.

1) As you may have already read in their early-morning statement, Alex and Guillermo were on their way back to port after a temporary fix of several broken ribs – the same problem noted by at least two new other VPLP/Verdier boats – when they were rolled and dismasted.

2) In fact they’d stopped the boat and were hove to on port during the little unforecasted bomb of a depression that developed off the NW coast of Spain two days ago.  Alex was asleep down below and Guillermo was on watch when a massive breaker capsized the boat.

3) From inside the boat, Alex found the canting button and moved the keel to the other side.  The boat snapped back upright, coming up without a rig and with plenty of new damage, including a broken foil.

4) The boat was full of water, the electronics were fried, and it was time to GTFO.

5) On reaching shore, all Alex could tell his technical crew was ‘I’m going to get my boat.”  The team wasted no time chartering an oceangoing tug, and they are already on station about 100 NM to the Northwest of La Coruña with Hugo Boss.

6) The dewatering is going well, the boat will be cleaned up and made as safe as possible today, then towed back to Spain overnight.

As soon as Alex has had a big of sleep and his boat is safe and sound, we’ll have an extensive interview.

Still no statement or word from VPLP or Verdier, who have a very difficult route to negotiate themselves right now.  Between the insurers, race organizers, teams, and the ocean racing community, Vincent and Guillaume have very few options in how they handle this situation if they are to avoid becoming known as the next JuanK.

Check back soon for more info; watch the thread for the latest.